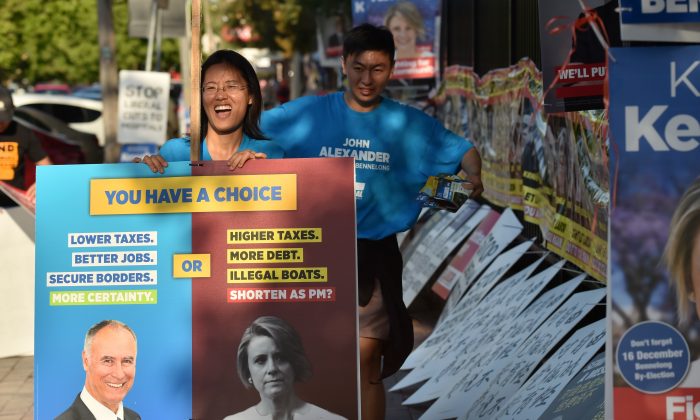 Supporters of Liberal MP John Alexander pack away banners outside a polling station at the close of voting in the suburban Sydney seat of Bennelong on Dec. 16, 2017. Electoral pressure by the Chinese Communist Party almost toppled the Australian government. (PETER PARKS/AFP/Getty Images)
Viewpoints

Wake Up to Chinese State Infiltration: A Review of ‘Silent Invasion’ by Clive Hamilton

While I was visiting “down under” last Christmas, I watched with fleeting interest the constant coverage of a by-election in Sydney. It was precarious for the Liberal Party: Losing the Bennelong seat would wipe out Prime Minister Malcolm Turnbull’s slim majority in parliament. Only now, on reading Clive Hamilton’s disturbing new book “Silent Invasion,” have I realized the full implications of that particular plebiscite.

The by-election was called after John Alexander, member of Parliament for Bennelong, was alleged to have dual citizenship, which would have invalidated his position. The Labor Party put up their most appealing candidate, Kristina Keneally, but despite the hype, Alexander held on. However, Sky News Australia omitted a major part of the story. Ironically, while the nationality rule is to prevent foreign influence, electoral pressure by the Chinese Communist Party almost toppled the Australian government.

For many years the seat of popular Prime Minister John Howard, Bennelong is an affluent suburb on the northern shore of Sydney, normally a Liberal stronghold. But the demography is shifting. Rich newcomers are steadily replacing colonial-style homes with brash concrete and glass edifices, and whereas the settled Chinese are well-integrated, newer arrivals mostly converse in Mandarin.

Beijing strives to control the Chinese diaspora and to gain political influence wherever it goes.  The largest donations to both major Australian political parties are from Chinese donors. In Bennelong, United Front, a CCP-funded organization, attacked the government’s foreign interference law for being “racist.” After intensive mobilization, the swing to Labor was over 10 percent in areas of high Chinese influx.

Hamilton, professor of public ethics at Charles Sturt University in Canberra, was initially alerted to Chinese state infiltration when he witnessed an orchestrated and violent counter-demonstration at a campus protest by students in support of the Dalai Lama. Effectively, people in one jurisdiction were prevented from exercising their right to freedom of speech by the foot soldiers of another country. Today, Australian universities have gotten the message and eschew speakers who oppose the Communist Party line.

Since the fall of Soviet communism, the CCP has shifted from promoting universal Marxism to Chinese (more specifically, Han) nationalism. Mao is still revered, but with a different aspect. The Patriotic Education Campaign teaches schoolchildren that their nation has been humiliated by the colonial powers, the United States and Japan, but is now rising from victim to victor.

Brainwashing serves not only internal control but also censorship abroad. Adherents of Falun Gong, a spiritual movement that practices meditation, are persistently harassed, as are reporters and distributors of The Epoch Times, an international newspaper that exposes human rights abuse in China.

The stalking of dissidents is facilitated by digital technology. Activity on Facebook (a website blocked in China) is monitored, but it doesn’t stop there. Western governments have been unbelievably negligent in giving contracts to Chinese firms for sensitive work such as surveillance systems.

Hangzhou Hikvision, a company under Chinese state control, supplies the advanced, internet-linked CCTV cameras with face-tracking capacity installed in the London Underground and at Gatwick Airport. Potentially, the data could be sent to servers in China, allowing agents to track troublesome expats wherever they go.

Thus the long arm of Chinese law extends far beyond national borders. As quoted by Hamilton, “A fugitive is like a kite: The body is overseas but the thread is within China.” In 2015, Dong Feng, a Falun Gong practitioner living in Australia, was persuaded by Chinese agents to return to China to face embezzlement charges. Anyone refusing to play ball with the regime may be threatened with persecution of family members.

This year, The New York Times reported the case of Zhuang Liehang, who had fled to America in 2014 after organizing futile protests against official land grabs in his seaside village of Wukan. At his New York apartment, he received a call from a jail where his father was being held: “Stop what you are doing. It will be bad for your family.” Although Zhuang was worried that his father might be punished by proxy, he continued to post on Facebook. This led to several more calls, before they ominously ceased.

Undoubtedly, to return to China is risky. State prosecutions rarely result in acquittal, and charges of committing so-called political crimes are difficult to disprove. Convicted “thought criminals” are targeted to become sources of organs to fuel the regime’s lucrative transplantation industry. Since healthy kidneys can be sold to wealthy patients, prisoners are financial assets.

Queensland has stopped training Chinese surgeons due to ethical concerns about how they will use their skills. Furthermore, China is believed to account for half of the global capital punishment tally (about a thousand annually), although records are not divulged.

The CCP preys on naïve liberal elites so keen on celebrating multiculturalism that they are blind to its nefarious agenda. It is understandable that poorer countries dependent on Chinese investment do not challenge the dogma on Taiwan, Tibet, and military bases in the South China Sea, but there is no excuse for established democracies.

The Australian establishment shuns opponents of the communist regime, steering clear of controversy and liaising only with “community leaders” supportive of Beijing. An illustration of this virtuous folly is a photograph in Hamilton’s book, taken at the prestigious National University of Australia, with this caption:

The flag, of course, was not Australia’s but that of communist China. Hamilton is inevitably accused by middle-class intellectuals of racism, but he writes warmly of Chinese-Australians and their contribution to society, while his critics effectively deny the civil liberties of fellow citizens.

Like the established Chinese community, Hamilton is concerned by the politicized newcomers and their exploitation in Beijing’s pursuit of global supremacy. Having struggled to get his book published, Hamilton suggests, “Academics in Australia might reflect on the fact that scholarly books critical of the CCP are now shunned by publishers.” Are Western governments prepared to do anything about this?

Dr. Niall McCrae is a senior lecturer in mental health at King’s College London. He has a keen interest in social history and has written two books: “The Moon and Madness” (2011) and “Echoes from the Corridors: The Story of Nursing in British Mental Hospitals” (2016). McCrae writes regularly for Salisbury Review and various political websites.