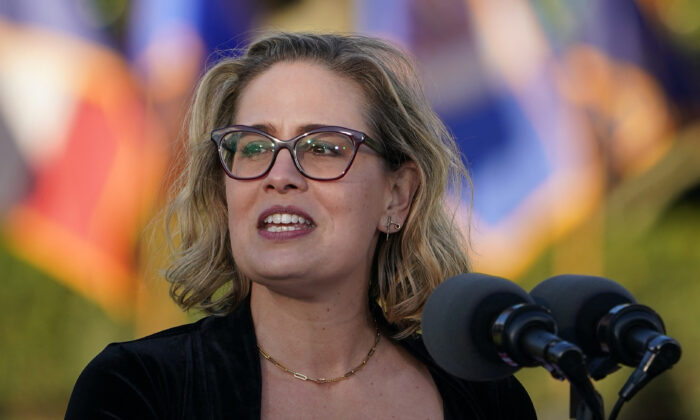 Sen. Kyrsten Sinema (D-Ariz.) speaks during a signing ceremony for H.R. 3684, the Infrastructure Investment and Jobs Act on the South Lawn of the White House in Washington on Nov. 15, 2021. (Mandel Ngan/AFP via Getty Images)
Viewpoints

Wake Up, Progressives: You’re Lucky to Have Kyrsten Sinema

Brian Murray knows just how fierce an opponent Arizona’s Sen. Kyrsten Sinema can be. The Republican strategist saw his candidate lose to Democrat Sinema in their 2012 race for the House.

Calling the experience “unpleasant,” Murray admits his candidate, Vernon Parker, was flawed, but “flawed candidates win all of the time. Kyrsten, however, was an absolute machine.”

Sinema, along with fellow centrist Democrat Sen. Joe Manchin of West Virginia, has recently become the epicenter of American politics largely because she insists on siding with the interests of her constituents instead of the demands of her party. Over the past few weeks, she has refused to support the Democrats’ Build Back Better bill—a social spending package with an initial $3.5 trillion price tag (now $2 trillion) to fight climate change, fund child care and universal pre-K, and extend the expanded child tax credit.

Progressives saw her stance as a betrayal, and she has been hounded by activists. At Arizona State University, where she is a lecturer, angry protesters followed her as she left a classroom and headed into a nearby restroom, chanting: “We need a Build Back Better plan right now!” Others demonstrated outside a private wedding she officiated in Bisbee, Arizona.

But Sinema has never been the “Prada Socialist” she once jokingly called herself in a 2006 interview with the now-shuttered fashion magazine 944.

Ever since January, the ruling class has expressed shock that she opposes the elimination of the Senate’s 60-vote threshold. But she has held this view for the entire six years she served in the House and the three years she has spent in the Senate.

The left despises her obstructionist views that do not allow the Biden administration, and the Democrats, to get everything they want. But anyone who has ever listened to her speeches knows that Sinema has always been “Independent, like Arizona.”

Born in Tucson, Sinema’s parents divorced when she was a child, and she moved to a small town in Florida with her two siblings after her mother remarried. When her stepfather lost his job, the family became homeless and spent more than two years living in an abandoned gas station.

Eventually the family’s economic fortunes improved, and they moved into a small home. Despite her circumstances, Sinema was a star student, graduating from Brigham Young University with a bachelor’s degree, then going on to earn a Master’s in social work, a law degree, and a doctorate in justice studies.

Of her childhood with no electricity or running water, she told the Washington Post in 2013: “There are lots of people like that in this country. We don’t talk about it, but it’s true.”

Born and raised as a Mormon, she left the faith after she earned her first degree from Brigham Young. “I have great respect for the LDS church,” she told the Washington Post. “Their commitment to family and taking care of each other is exemplary. I just don’t believe the tenets of the faith that they believe.”

In 2016, she told a local Arizona newspaper how she recovered from poverty. “You think about the traditional narrative, ‘pull yourself up by your bootstraps’ and the liberal message, ‘help those in need and have a safety net.’ But the reality is, it’s a combination of those two. That’s what shaped my life—working hard and getting the help I needed.”

The 45-year-old lawmaker was briefly married to a fellow Brigham Young classmate and is now divorced with no children.

“The fact that she was brought up Mormon … probably had a certain degree of influence in her life. And the fact that she was homeless as a youth, that had impact on her life,” said Steve McMahon, a Washington-based Democratic strategist who worked on the presidential campaign of Howard Dean and on the Senate staff of Ted Kennedy.

“But in reality, she is a workhorse, like former Senator Jon Kyl but she’s also a show horse like the late Senator John McCain. I mean, she’s like both of them combined into one, and that’s pretty rare,” he said of the two iconic statesmen who represented Arizona for decades.

Sinema’s ascension into politics began like a lot of successful lawmakers—she lost. Twice, in fact, running first for Phoenix City Council in 2001 as a Green Party candidate and then for the Arizona legislature in 2002 as an independent.

In 2004, she ran again for the state legislature—but this time as a Democrat—and won. Eight years later, when a new Phoenix area congressional seat was created as a result of redistricting, she took advantage of the new balance of Republican, Democrat, and Independent voters to handily beat GOP candidate Parker, despite all the socialist spaghetti Murray could throw at the wall to defeat her.

“I remember we called her a Prada socialist in one of our TV ads. You know what? It wasn’t true. In the end result, that’s just not who Kyrsten Sinema is,” Murray admitted.

Murray says Sinema embodies the spirit and values of Arizona.

“This is a state where people come to start over. Her independence and recognition that you need to compromise to get things accomplished is what has always made her a perfect fit with the electorate.”

While she is openly bisexual and likes to dress with flair—she is not opposed to wearing thigh-high boots or pink wigs in the chamber—Sinema has never been a banner for radical activism.

When she ran for the House, “common ground” were the two words she used most often in her ads and speeches. When she reached the House in 2015, she voted against Nancy Pelosi as speaker, opting for John Lewis instead. When she announced her run for the U.S. Senate in 2017, she said: “It’s time to put our country ahead of party and politics” and vowed to not vote for Sen. Chuck Schumer as Senate minority leader if she won. (Because the Senate votes for their leader behind closed doors, it is unknown if she stuck to her guns on that promise.)

Dane Strother, a California-based Democratic strategist, said Sinema is doing exactly what she is supposed to. “In a representative democracy, you are hired to represent your constituents,” Strother said. “If you don’t do that, they’ll find someone who will.”

When Sinema ran for the Senate seat vacated by Republican Sen. Jeff Flake in 2018, she defeated fellow Arizona congresswoman Republican Martha McSally and became the first woman elected to the U.S. Senate in Arizona history. Her presence has helped the Democrats move from a minority in the Senate to a 50-50 split with Vice President Kamala Harris serving as the tiebreaker.

McMahon said he thinks progressive activists should wake up and realize just how valuable Sinema is.

“Instead of criticizing Kyrsten Sinema, progressives should thank God that she’s able to win in a competitive state like Arizona, because without Kyrsten Sinema, there would be no majority leader, Chuck Schumer.”

Murray, meanwhile, chuckles when he hears both progressives and Republicans talking about running against her in 2024.

“I mean, that’s a joke. There is zero chance whatsoever that anybody in Arizona has a chance of defeating her, especially from within the Democratic Party.”