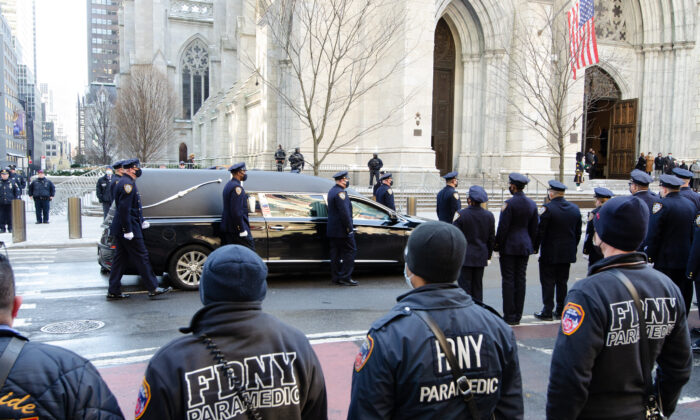 This time was for the wake of police officer Wilbert Mora, the second of two policemen shot and killed in the line of duty.

Mora’s brethren from the 32nd Precinct stood in the center of the avenue wearing their class-A, dress uniforms, saluting him in their white gloves, with black mourning bands across their shields.

Once again a musician played on a single bagpipe and a color guard stood nearby.

The security details on duty for the wake were a little different from last week’s funeral of Jason Rivera. Instead of a single helicopter, several circled above. The number of officers carrying AR rifles increased.

Firefighters and EMS personnel from the FDNY were present as well New York State troopers.

The wake came two days after a nor’easter socked the Northeast with heavy snow, yet Fifth Avenue was clear for vehicles and pedestrians. The temperature was slightly higher than last week with lower winds.

Mora and fellow officer Rivera were shot on Jan. 21 while responding to a domestic dispute involving a mother and her son in the Harlem section of Manhattan.

Rivera died on the night of the shooting.

On Twitter, the NYPD posted, “In his final act of service, Officer Wilbert Mora saved the lives of five people thanks to his organ donation.”

In addition to the shooting deaths of Rivera and Mora, another NYPD officer was shot on Jan. 20.

A perpetrator opened fire on Libretti and other narcotics officers, striking Libretti in the leg. They returned fire.

“Even with a serious leg wound, bleeding badly enough that fellow officers had to apply immediate pressure to slow the blood loss, he held a ballistic shield in front of his team to protect them from gunfire,” said Police Commissioner Keechant Sewell, in a press conference later that day.

Libretti was released from Staten Island Hospital on Jan. 31.

Rivera’s wake was held on Jan. 27 and his funeral on Jan. 28, both at St. Patrick’s Cathedral.

Mora’s funeral will be held there on Feb. 2.