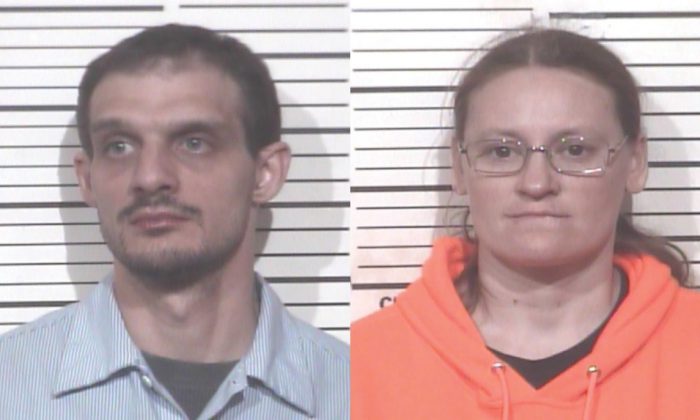 Mark Lee Pierce and Jessica Woodworth of Paris, Tenn., were arrested on suspicion of child abuse and aggravated assault when an Olive Garden waitress observed them behaving strangely and called the police on March 3. (Paris Police Department)
By Tom Ozimek

An Olive Garden waitress called the police after picking up disturbing cues from a family dining at the restaurant, saving the children from their allegedly abusive parents.

Waitress Jordan Cooper, 21, was working an evening shift at the Olive Garden in Paducah, Kentucky, on March 3, when the odd behavior of a family at a table made her feel ill at ease.

“I first walked around to the baby. She looked at me with a face that said help,” Cooper said, reported Paducah news station WPSD.

At the table sat a man, a woman, an 11-year-old girl, and a baby that, according to Newsweek, appeared to have been “beaten in the face.”

“The baby was sitting in a highchair with a blanket over her head,” Cooper told Yahoo Lifestyle. “When the blanket came off, her face had a lot of black-and-blue bruises.”

“I can’t even describe to you how bad she looked,” Cooper said of the baby’s face, WPSD reported, “and how and why nobody noticed it.”

Cooper’s suspicions were further aroused when she noticed the man taking the baby to the men’s room multiple times—without a diaper bag.

Alarmed by what she was witnessing, Cooper sprang into action and asked one of her co-workers to photograph the family inconspicuously to get potential evidence of child abuse.

A fellow employee took the picture under the pretext of taking a group snapshot for her table. “My colleague zoomed in on the family and asked her customers to text us the photos,” Cooper told Yahoo Lifestyle. “It was a team effort.”

Cooper wrote in a since-deleted Facebook post she saw a man “force-feeding her [the child] food down her throat and grabbing her by her shirt and getting in her face.”

The eight-months pregnant server also saw the father behaving aggressively toward the baby. “He shoved breadsticks into her mouth and said, “‘You’d better eat this’ and got in her face while she whimpered,” Cooper told Yahoo Lifestyle.

“He kept taking her to the bathroom when she cried and acting very aggressive toward her,” she wrote on Facebook.

Cooper told WPSD she confronted the man when he took the baby to the bathroom for the third time, asking him, “What are you doing?”

The parents then appeared to become suspicious, Cooper said, and then they left.

“They drove away so fast, the mom didn’t even strap the baby into her car seat,” Cooper told Yahoo Lifestyle.

Cooper said she went outside and snapped a photo of their car license plate. She then contacted the police and the Department of Children’s Services (DCS).

“I couldn’t serve because my heart hurt so bad,” she wrote on Facebook.

5 weeks left till I get to meet my daughter 😇💕

Information about the suspicious encounter eventually reached the Paris Police Department in Tennessee, where the couple lives. Officials carried out a welfare check and were reportedly horrified by what they saw.

“I heard the conditions of the home were so horrific, a police officer had to collect himself outside,” Cooper tells Yahoo Lifestyle.

Police conducting a welfare assessment at the couple’s home said the baby’s face was dotted with bruises from her hairline down to her jaw, Yahoo Lifestyle reported. The infant was sent to the hospital for a medical examination.

Both children were taken into DCS protective custody.

Mark Lee Pierce, 33, and Jessica Woodworth, 36, of Paris were arrested on charges of child abuse and aggravated assault. They were both booked into the Henry County jail, WPSD reported, each on a bond of $200,000.

“I couldn’t sleep that night, I was so worried,” Cooper tells Yahoo Lifestyle. “It makes me feel good to know these children will be better off.”