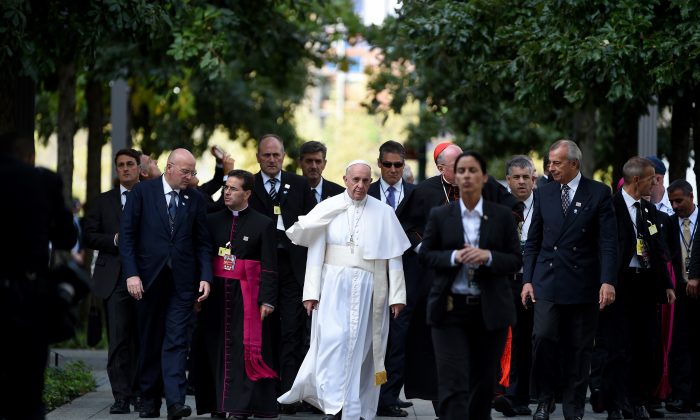 Pope Francis arrives for a multi-religious service at the site of the 9/11 memorial and Museum on September 25, 2015 in New York City. (Thomas A. Ferrara - Pool/Getty Images)
New York

NEW YORK—Hours before Pope Francis was scheduled to arrive in Lower Manhattan, the streets surrounding the 9/11 Memorial & Museum contained an eerie quiet. It was a vacant morning, with no smells of pushcart eggs or coffee or exhaust. There were only closed off streets, filled with stern members of the secret service and drowsy members of the press.

A crowd of 1,000 chosen from a special lottery, mostly consisting of survivors, first responders, and family members of victims, arrived and lined up to go through comprehensive security checks.

Backs, chests, legs, ankles, buttocks, arms, and arm pits, were checked for potential weapons of any kind. There were countersnipers on surrounding buildings. Pope Francis’s visit to the United States spurred probably the largest security operation in U.S. history.

What was the Secret Service afraid of? Terrorists? Other fanatics?

These fears were certainly real to 9/11 survivors. From immigration reform to the abolition of the death penalty, Pope Francis has long been promoting a deeply human message about peace and unity. And he chose to present this message once again at a place that’s a visible reminder of human nature at its worst.

For many, that made it especially poignant.

“I’m excited to be here, especially because this is a sacred site,” said Shalima Perry, a bystander who works for the Port Authority. “So much of this place has been rebuilt, it gives you the feeling that we’re really on our way.”

For Francis Kellner and her twin sister Ann Kellner, it was therapeutic to see the pope at ground zero. This was the site where they lost their cousin, FDNY Lt. Kenneth Phelan, a husband and a father of four.

“They never found the body. We don’t have a burial ground to visit. This memorial is where we come to visit,” she said. “It’s wonderful that the pope is coming to bless this place.”

Pope Francis, whose pre-religious occupations ranged from a janitor, to a nightclub bouncer, to a chemical technologist, is known for his love for human connection.

One couldn’t help but wonder if he felt isolated by the security.

He stopped in front of the museum to meet with 18 family members of 9/11 victims. He gave them each a box of rosary beads.

Gov. Andrew Cuomo and his partner Sandra Lee, who recently recovered from breast cancer, shook hands with the pope. He blessed Lee, giving her a soft pat on the forehead.

“The water we see flowing toward that empty pit reminds us of all those who fell prey to those who think that destruction … is the only way to settle conflicts,” Pope Francis said.

He walked into the 9/11 Museum, which contains foundation from the original World Trade Center, artifacts of destruction, and records of simple acts of kindness—such as a podiatrist who volunteered to give foot massages to first responders, each day, for nine months.

“This place of death became a place of life too,” Pope Francis said.