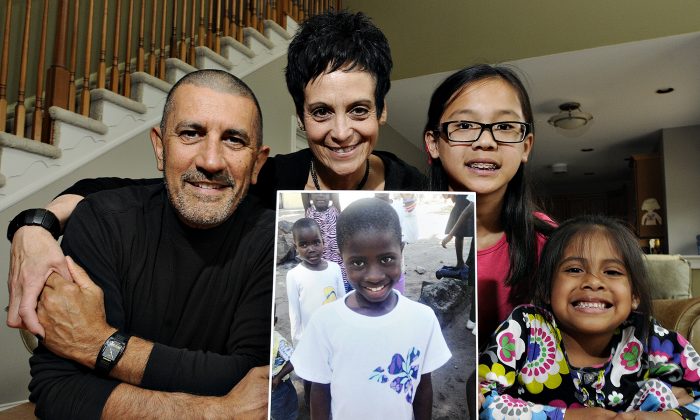 In this photo taken on May 9, 2014, Michael Fichera and Linda Scotto with their two daughters Emma, 11, and 6-year-old Kearly pose with a photograph of their adopted Congolese daughter Miriam at their home in Doylestown, Pa. (Rick Kintzel/The Intelligencer via AP)
US

NEW YORK — After nearly two years of heartache and frustration, several hundred American families now have reason to hope that children they are adopting from Congo may finally be allowed to travel to the United States.

For many families, the long wait has been immensely challenging. Some parents relocated to Congo to be with their children, while Congressional supporters of the families said at least 10 of the children died and others suffered serious medical problems during the delay.

The adoptions had been approved by courts in the beleaguered Central African country, but the children were prevented from leaving after the government suspended adoption proceedings in September 2013 and stopped issuing exit permits.

This week, however, the U.S. State Department informed the waiting families that Congolese authorities have formed a commission to review pending cases, and unless irregularities are found, the children will be able to join their adoptive families in the U.S. and several European countries. While hopes have been raised and dashed previously, the news seemed to reflect a genuine breakthrough.

“We’re feeling like this is the real deal,” said Katie Ong of Vancouver, Washington, who along with her husband is adopting a 3-year-old boy named Moses.

The development does not mean an overall resumption of international adoptions from Congo, which has an estimated 4 million orphans living amid war, poverty and dysfunction. The government, concerned about fraud and corruption, will continue to reject any new adoption applications while it works on reforms.

However, Susan Jacobs, the State Department’s special adviser on children’s issues, said she was hopeful that the commission review — already underway — would bring good news within weeks to most of the U.S. families whose adoptions had been approved. In all, the U.S. cases involve about 425 children.

“What we want is for those children and those families to be together,” Jacobs said. “They have waited far too long for this to happen.”

Initially, the Congolese government attributed the suspension to allegations that some children were abandoned by their adoptive parents and others were “sold to homosexuals.” More recently, authorities in Congo indicated that they view their entire adoption system as beset by corruption and falsified documents.

The breakthrough regarding exit permits came after months of pressure by the U.S. government and its European partners.

“It shows diplomacy can work,” Jacobs said. “Stressing how this will be in the best interest of the children finally won out.”

For the waiting families, a common bond throughout the saga was persistence.

Here are a few of their stories.

Linda Scotto and Michael Fichera of Doylestown, Pennsylvania, already have one daughter adopted from China and another from Ecuador.

But when they saw a photo of a 6-year-old Congolese girl on an adoption website in 2012, they decided she too should become part of the family.

By the fall of 2013, the adoption process was virtually completed, and the couple was getting ready to travel to Congo when the suspension was imposed. The girl, Miriam, has continued to live in an orphanage; she’ll turn 9 in August.

“Just being able to hold her was wonderful,” Scotto said. “She loved to go swimming. I took her to a grocery store — that was amazing to her.”

“We have pictures of her all over our house,” Scotto said. “She’s part of our family.”

The past two years have been full of challenges for Evan and Elizabeth Clements of Lamar, Missouri.

They launched an effort to adopt from Congo in January 2013 and were matched with a baby boy just days after his birth that June. By December, the adoption of Elijah was formally approved, but an exit permit was unavailable.

Meanwhile, Elizabeth Clements became pregnant and gave birth to a son, Ezekiel, in January 2014. He has subsequently undergone three open-heart surgeries to cope with a serious heart defect.

The couple also has a daughter adopted from Taiwan, 3-year-old Eden.

Stuck in Congo, Elijah, who will turn 2 on June 22, has come down with malaria three times, Evan Clements said.

“It’s been an incredibly stressful two years,” he said. “When we have Elijah in our home, that will be such a burden lifted off our shoulders and an answer to so many prayers. It will be good a day.”

With two sons, one 6, the other almost 4, Katie and Ryan Ong have plenty to keep them busy at their home in Vancouver, Washington.

But back in April 2013, having decided to expand their family via an adoption, they did some research and quickly identified Congo as the country they should apply to.

“With the war, and all the need there, we really felt a major tug at our hearts,” Katie Ong said.

In July 2013, they were matched with a malnourished 15-month-old boy, and the adoption was approved just before the suspension.

Neither parent has been able to visit Moses, who’s now 3, though they’ve sent him pictures and even talked to him via Skype.

Katie Ong said the recent memo from the State Department boosted her optimism.

“That’s a huge step forward,” she said. “They can’t give us false hope.”

And now it’s even busier than usual on the home front.

“We’re scrambling to get a bed put together, buy a car seat,” Katie said.