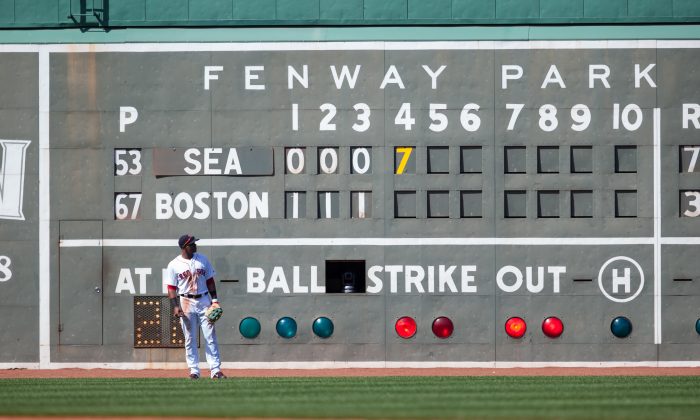 Yoenis Cespedes of the Boston Red Sox looks at the scoreboard and the 7-run inning posted for the Seattle Mariners during the fourth inning at Fenway Park on August 23, 2014 in Boston, Massachusetts. (Rich Gagnon/Getty Images)
12- OBSOLETE

Wait ‘Til Next Year, BoSox Fans

The joy and passion and full houses (breaking the 700-straight sellout mark and counting) and winning ways are more like memories now at Fenway Park. However, despite the doom and gloom at the little park in Boston, things are still in sharp contrast to the way things once were at the Fens most of the 1960s.

There are still those around who recall that time, some with mixed emotions.

Sam Mele: “I came into Fenway a lot when I managed Minnesota from 1961 to 1967. My home was still in Quincy, Mass., so I slept in my own bed. It was funny. I was managing against the team that I loved.

In 1965, we beat Boston 17 out of 18 times, eight out of the nine at Fenway. It actually hurt me, to beat them. I felt sorry because in my heart I was a Red Sox fan. I had played for them, I had scouted for them. Tom Yawkey would come in my office. And we would talk a lot. Oh yeah, geez, he had me in his will.”

The losing, the miserable attendance, the doom and gloom that pervaded Fenway was on parade big time on the 16th of September, 1965. The tiniest crowd of the season made its way into Fenway Park—just 1,247 paid and 1,123 in on passes. Dave Morehead opposed Luis Tiant of the Cleveland Indians.

The worst came late in the season. On Sept. 28 against California, only 461 fans showed to watch the sad Sox. The next day was even worse against the same team—just 409 in the house. Finishing ninth in the 10-team American League, the Sox lost 100 games and won 62. The nadir had been breached.

Managers kept coming and going. Top prospects somehow never made it for one reason or another. Billy Herman was in place as the 1966 season started. Early on Dave Morehead, just 24 years old, regarded as a brilliant future star, suffered an injury to his arm and was never the same. Posting a 1-2 record in a dozen appearances, he symbolized the Red Sox of that era—promise but pathos.

Jim Lonborg: “The 1967 season started off as a typical Red Sox season. There were 8,324 fans on a cold and dreary April 12th Opening Day. We beat the White Sox 5-4. Petrocelli hit a three-run homer. And I got the win.

“The next day there were only 3,607 at the ballpark. And then we went on a road trip. We came back having won 10 straight games. And when our plane landed there were thousands of fans waiting at the airport. That moment was the start of the great relationship between the fans and the players.”

Bob Sullivan: “I went to Dartmouth, and we used to road trip down to Fenway and get standing room without any trouble. It was eight dollars for grandstand seats. But so many seats were empty. You would flip an usher a quarter and you could move down into the seats. Then it changed. What happened was ’67.”