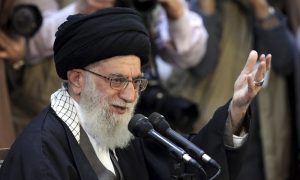 Wait and See on the Iran Nuclear Deal

What is the world to make of the proposed nuclear deal with Iran crafted by the five permanent members of the U.N. Security Council plus Germany?

Is it a major accomplishment or a desert mirage for President Obama to bar Tehran from developing a nuclear weapon for a decade on a best case scenario? Is an ineffective deal better than none? Or is it a “stunning historic mistake” as Israel’s Prime Minister Benjamin Netanyahu put it?

Tom Friedman of The New York Times wrote earlier that Obama did not deploy all the leverage available to him to prevent Iran from becoming a threshold nuclear power. Like Friedman, many of us still need more time to study the deal, hear from nonpartisan experts, and see what alternative strategies critics have to offer.

Given Tehran’s past illicit procurements, cheating will be an ongoing reality if the agreement takes effect. Iran’s vast geography also poses particular challenges for inspectors who must gain access to labs, underground sites, scientists, and military bases. Western observers said new inspections must be far more intrusive than in the past.

A number of features in the agreement are troubling. For example, given the virtual certainty that Tehran will cheat, is it not foolish to prescribe that if the U.N. nuclear agency identifies a suspicious site a panel with a Western majority can decide whether Iran must give the agency access only within 24 days? This is a long interval—probably giving Tehran time to cover up any banned activities.

There is little doubt that the economic sanctions (negotiated by Hillary Clinton as John Kerry’s predecessor) were what propelled the Tehran regime finally to negotiate. The snapback provisions for sanctions if Tehran breaches the agreement are, however, now subject to U.N. Security Council approval. Russia and China currently seem unlikely to support reinstatement of sanctions in virtually any conditions.

The agreement increases the “breakout” time—the number of months it would take Iran to produce enough bomb-grade material for a singular nuclear weapon—to at least one year.

Derek Burney, a former Canadian ambassador to Washington, and his associate Fen Osler Hampson are blunt in a joint opinion piece this week in the Globe and Mail: “Notwithstanding the U.S. administration’s desire to kick the Iranian nuclear down the road, it has conjured up the prospect of a new arms race in the Middle East as Saudi Arabia, Egypt, and perhaps even the Gulf States now consider their nuclear options.” If so, could anything be less helpful to the prospects for sustainable peace in the region?

The Economist magazine sees major problems as well, but overall supports the deal: “A country of Iran’s size and sophistication will get a bomb if it really wants one. Nothing can change that. But this pact offers the chance of holding Iran back and shifting its course. The world should embrace it, cautiously.”

German Chancellor Angela Merkel called the deal an “important success.” British Prime Minister David Cameron said the deal “keep(s) Iran from developing a nuclear weapon—and that will help to make our world a safer place.” Neither leader, of course, could oppose what their diplomats had just helped fashion in Vienna.

In sharp contrast, Iranian Maryam Rajavi, president-elect of the National Council of Resistance of Iran, a coalition of Iranian opposition figures and groups, thinks the proposed deal would fuel Middle East terrorism.

She said: “It not only fails to block Tehran’s pathways to a nuclear bomb, but will provide it with tens of billions of dollars to add to its war chest. Tehran’s nuclear program is explicitly tied to its revolutionary imperialist impulse. Former president Hashemi Rafsanjani once boasted if the regime acquires nuclear weapons, who could prevent the export of revolution?”

In the near term, the deal will be judged on whether Iran implements the rollback of its nuclear enrichment capabilities to which it has agreed and whether the international inspection system it has accepted can detect—and thereby deter—cheating.

Those hard-liners are invested in the status quo in which Iran is isolated, and they are empowered.
— President Barack Obama

In an interview with Friedman, Obama correctly characterized Iran as a “great civilization,” but noted it also has an authoritarian theocracy in charge that is “anti-American, anti-Israeli, anti-Semitic, (and) sponsors terrorism.” The United States has profound differences with Tehran.

Obama continues: “The [Iranian] opponents of this deal are the (most virulently anti-American and anti-Israel) hard-liners … those who are most invested in Iran’s sponsorship of terrorism … (and) in destabilizing Iran’s neighbors … that should tell us something, because those hard-liners are invested in the status quo in which Iran is isolated, and they are empowered.”

With or without the deal, major problems clearly persist in the world’s most dangerous region.