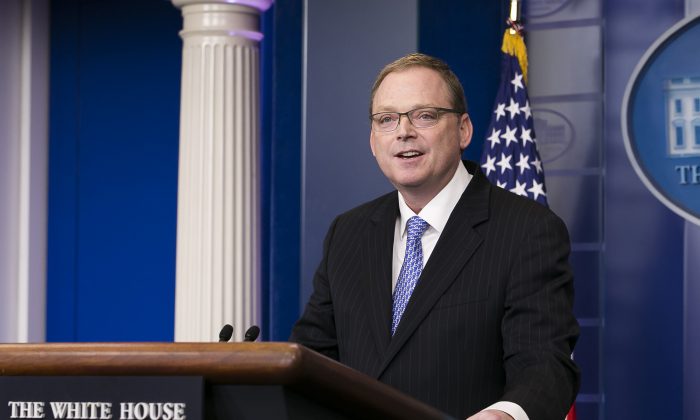 Inflation-adjusted average hourly earnings grew just 0.1 percent annually in the second quarter, according to the Bureau of Labor Statistics. However, CEA calculations show that real average hourly compensation was up 1.4 percent from a year earlier.

“For the average American household, a 1.4 percent increase in their income means over $1,000 more, per year, of income growth.”

Some of the compensation increases are embedded in fringe benefits that employers provide to their workers, according to the CEA report. And many of the official wage statistics fail to incorporate these benefits, such as bonus pay, health insurance, and contributions to retirement savings.

These benefits, however, have made up an increasing share of compensation in recent years, and the growth in total compensation has surpassed that seen for cash wages alone.

Ignoring bonus pay and other benefits is misleading, according to the White House, since more than six million workers received tax cut benefits this year in the form of pay raises, improved benefits, and bigger bonuses.

“Bonuses and paid leave are the ones growing fastest lately,” said Hassett. “Employees appreciate such benefits just as much as cash, and that’s why we look at the sum, rather than one in isolation.”

The average full-time, full-year employee saw the value of their benefits increase by nearly $1,300 since 2004, according to the White House.

Economic growth climbed above 4 percent in the second quarter and the unemployment rate is 3.9 percent, near its lowest level in 18 years. U.S. job openings surged to record-high levels over the past year and job vacancies increasingly surpassed the number of unemployed people. Despite the tight labor market and strong economic growth, lack of wage growth has been a continued puzzle for many economists.

“We wrote this paper to investigate that question,” Hassett said. “Much of the commentary about wage growth that we see is influenced by confusion we find about proper measurement.”

When measuring real wages, headline measurements use the consumer price index, which exaggerates inflation, according to the report.

“When using the personal consumption expenditure price index (PCEPI)—which is preferred by many economists, including those at the Federal Reserve—we observe faster real wage growth than when using the commonly reported consumer price index for urban consumers,” stated the report.

In addition, the age and demographic profiles of the workforce also affect the measures of wage growth.

According to the report, almost 3.7 million people will turn 65 this year, which is roughly 1 million more people reaching retirement age than was the case at the beginning of the decade.

“When you have more high-wage workers like baby boomers retiring, while younger or less-experienced workers come into the labor force, then the national average wage can go down,” said Hassett, adding that the CEA has taken these demographic shifts into account when calculating real compensation growth.

However, the CEA report also shows that pay increase in 2018 after the adjustments are growing this year at a slower rate than in 2015, despite tax cuts.

According to Hassett, tax reform will lead to higher wages as companies will continue to invest in their workforce. However, full wage effects depend on capital formation, which will take three to five years.

“We’ve seen capital spending virtually explode this year, over the first half of the year; it’s up by about 10 percent,” said Hassett, adding that the capital spending will track through to productivity and then into wages.

“For households, the pace of growth we see could represent about $2,000 in household income gains over two years from the strong economy and Tax Cuts and Jobs Act, and that would be $4,000 over four years if it continues,” he explained.

The tax-reform bill passed in December reduced the corporate income tax rate from 35 percent to 21 percent. In addition, the full expensing provision of the bill allowed companies to deduct 100 percent of the cost of their capital investments in the year the investment is made.

As a result, businesses have accelerated their capital spending in 2018. Nonresidential fixed investment, which included spending on equipment, structures, and intellectual property rose 8.5 percent year-on-year during the second quarter.

Capital investment raises capital per worker, a situation called capital deepening, which increases labor productivity and wages, according to the CEA.