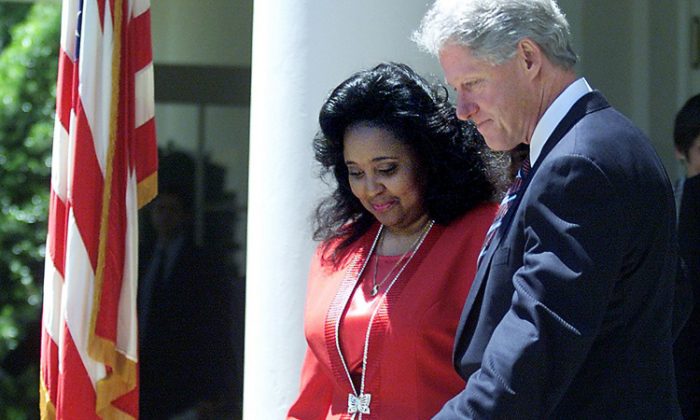 In this May 2000 photo, President Bill Clinton leads Karen Bethea into the White House rose garden to announce several measures seeking to narrow the wage gap for women. Up to today, numerous studies are being published worldwide every year that continue to find women are being paid less than men. (Tim Sloan/AFP/Getty Images)
Business & Economy

The male-female wage gap has been discussed by economists, academia, in doctoral dissertations and seminars. In any given year, numerous studies are being published worldwide.

However, there isn’t one study that includes multiple factors concerning the pay differential as most studies address a single factor. All studies look at it from a very narrow window. By ignoring multiple factors that could affect gender inequality, the result is considered to be skewed.

“What is needed … is for researchers to be aware of potential reporting biases that may vary by topic, gender and time—and to correct accordingly,” according to a February article on the University of Georgia website.

“The wage gap either disappears or closes significantly between males and females the higher the educational attainment and when holding the same type of position,” a doctoral dissertation completed in 1993 advises.

A mid-2012 study evaluating physician researchers, published on the University of Pennsylvania website, states, “Women were far less likely to be represented in higher-paying interventional specialties than men, with the notable exception of obstetrics and gynecology.”

The study suggests that one reason women physicians enter lower-paying specialties could be because they are pushed to work in those particular fields by their schools. Also, one reason could be that the fields these doctors have chosen pay lower salaries because they are dominated by women.

“The gender difference in salary observed herein was not fully explained by measured differences in specialization, institution, academic advancement, or productivity. A number of other explanations are possible,” the study advances.

A 2012 study by the American Association of University Women (AAUW) suggests that occupational segregation could be the main reason for the wage gap.

“It will take more than individual women pursuing careers in ‘male’ fields to ensure fair pay for all,” the AAUW report states.

The major reason for the pay differential is discrimination, the U.S. Department of Labor website states. A reason could be that young girls are steered away from scientific courses.

The wage differential is not as high as studies suggest, argues an October 2011 report on the Federal Reserve Bank of St. Louis website. It points to a recent U.S. Labor Department report that analyzes the wage gap in 2007. The analysis took into consideration factors such as education, years of experience, type of job, taking time off for motherhood, and overtime.

Pay Equity From a Different Perspective

“Nearly 50 years after the passage of the Equal Pay Act of 1963, women continue to earn less than men do in nearly every occupation,” an October AAUW report states.

Both genders are charged the exact same amount for college classes, and both have to pay the same interest rate when getting a loan from a financial institution.

The difference in pay materializes when the new graduate enters the work force, although they bring the same package to the table: similar age, a bachelor’s or master’s degree, and having graduated from the same university.

“The female-to-male earnings ratio varied by race and ethnicity. White women earned 83.4 percent as much as their male counterparts compared with black (93.2 percent), Hispanic (87.5
percent), and Asian women (73.1 percent),” the U.S. Bureau of Labor Statistics (BLS) reports in an October release.

However, these BLS numbers appear to lump all occupations into one category and don’t distinguish among jobs that require a university education.

“Both Canada and the United States slip out of the top 20 this year. … The United States (22) loses five places this year,” according to the Global Gender Gap Report 2012 on the World Economic Forum (WEF) website.

The United States is not faulted for educational achievement by women, ranking No. 1 among a number of countries, such as Iceland, Finland, and Norway, and with many more women than men enrolling in universities and colleges. Also, America’s women are doing quite well when it comes to being employed in legislative branches, holding official positions, and being a manager. The researchers also suggest that the U.S. wage gap is narrowing.

The United States is faulted for the lack of political empowerment, ranking 55 out of 135. This ranking looks at the number of women holding political office and if there were female heads of state over the past 50 years. In the United States, only 17 percent of the members of the political establishment are women, considered to be below the global average.

In the area of life expectancy and mortality, the United States was ranked 33, with no explanation provided.

WEF’s announcement of their latest report states, “The global economic gender gap now stands at 60%, while only 20% of the political participation gap has been closed. Long term, this reflects an improvement in the economic status of women in a third of the 135 countries surveyed, including the world’s four largest economies: the USA, China, Japan and Germany.

States Failing Women When It Comes to Pay

“Income inequality is severe in some industries, and there are states with concentrations of these businesses,” a Nov. 2 article on the 24/7 Wall Street website states. The article reports on the 10 worst paying states for women based on the U.S. Census Bureau’s 2011 American Community survey.

The wage disparity in some states has an unexpected twist. Businesses in 5 out of the 10 worst states discussed in the article are paying more than women earn in other states and are actually among the states where women earn the highest pay in the United States.

However, men still earn much more than the women in those states. For example, Massachusetts is fourth among the 10 states where women earn the highest pay in all of America, but women still earn less than men.

The wage differential in Wyoming is the highest among the 10 worst states at $17,838, followed by Alaska, where the wage gap amounts to $15,285. Rounding out the top five states with the highest wage gap are Louisiana, Utah, and Washington state.

“High educational attainment by women did not erase the pay gap. As a whole, Alaska women with a bachelor’s degree earned less than men with just some college completion or an associate degree,” according to the 24/7 article.