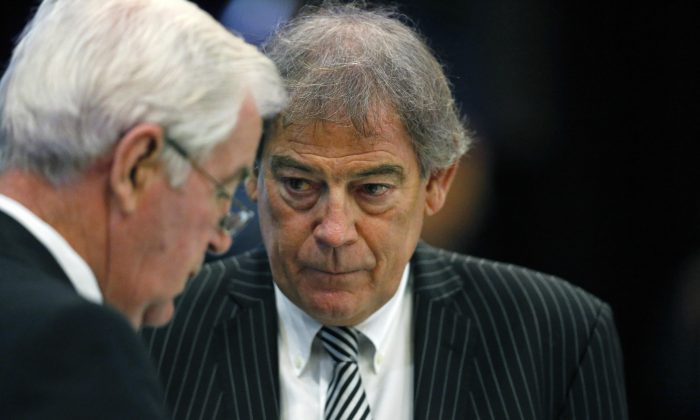 New Zealander David Howman (R), the director general of the World Anti-Doping Agency (WADA), talks with Craig Reedie, WADA president, during a break in a meeting at the Broadmoor Hotel in Colorado Springs, Wednesday, Nov. 18, 2015. Leaders from the World Anti-Doping Agency met Wednesday to decide whether to ban Russia's anti-doping operation in the wake of the report about corruption in the country's track and anti-doping programs. (AP Photo/Brennan Linsley)
International

COLORADO SPRINGS, Colo.—Leaders of the World Anti-Doping Agency (WADA) declared Russia’s anti-doping operation out of compliance Wednesday—a harsh, though expected blow to a country accused of widespread corruption throughout its sports.

Members of the WADA foundation board approved a recommendation from an independent commission that detailed widespread rule-breaking in Russia’s track and anti-doping programs. Nobody voted “no,” though it wasn’t clear whether some members abstained as the vote was done by raising hands.

Without an operating anti-doping agency, Russia cannot host or bid for international events. The track team has already been provisionally suspended by the sport’s governing body, the International Association of Athletics Federations (IAAF), which is also under investigation for its role in the doping scandal.

The vote came as key figures in the anti-doping movement, including Olympic champions Edwin Moses and Beckie Scott, called for banning the Russian track team from next year’s Olympics and for the probe in Russia to extend beyond track and field.

“I think the athletes were quite clear,” Moses said. “There was testimony in (the report) of what is going on in Russia is beyond track and field. They’re very, very concerned about that.”

Russia’s member on the WADA Foundation board, deputy sports minister Pavel Kolobkov, sat stoically during the vote, which he was not part of. Earlier, he presented his country’s case. The headline from his presentation was the possibility that the Russian government could strip funding from the Moscow anti-doping lab, which has also been declared noncompliant.

Dick Pound, the author of the independent commission report, responded to that by saying, “throwing out funding is throwing out the baby with the bathwater.”

Olympic Athlete Calls for All Sports to Be Investigated

Overall, though, there was little debate about the Russian agency (RUSADA), the fate of which has essentially been sealed since Pound’s report came out last week.

More urgently discussed was WADA’s ability to deal with the noncompliance declaration and the doping allegations that go beyond Russia’s track team.

WADA General Director David Howman said plans would be made this month for outside agencies to take over testing and compliance for Russian athletes, so as to avoid a vacuum of anti-doping work in the country.

Scott, an Olympic champion cross-country skier and the chair of the WADA athlete committee, told the WADA board that athletes around the world were asking the agency to expand its probe beyond Russian track and field.

“They’re saying, ‘Why not all sports?'” said Scott, a Canadian Olympic cross-country skiing champion and also the chair of WADA’s athlete committee. “I feel that there are a lot of athletes watching and waiting right now. We’re at a crossroads. We urge you to please consider these athletes and consider these sports as a whole.”

WADA’s representative from New Zealand agreed with Scott’s proposal and said he would like to see it adopted. But no action was taken.

WADA president Craig Reedie told Scott, “it’s quite difficult to agree today, around this table, that we would investigate all sports around the world.”

But later, he said he wanted to make it “absolutely clear that he had not declined to extend the mandate” of the commission to look at sports beyond track.

Travis Tygart, the CEO of the U.S. Anti-Doping Agency, called the lack of action “a gut kick to clean athletes.”

“Unless we want to be relegated to an impotent bureaucracy, we have to fulfill our promise to clean athletes and take action as requested by them,” Tygart said.

Scott’s proposal delivered context into a debate about the WADA budget, which stands at about $26 million a year and is in line for a 2 or 3 percent increase, but clearly needs more if thorough investigations are going to continue.

“There are going to have to be other sources of revenue,” Moses said. “WADA’s budget is, I don’t think, large enough to do what it needs to do.”