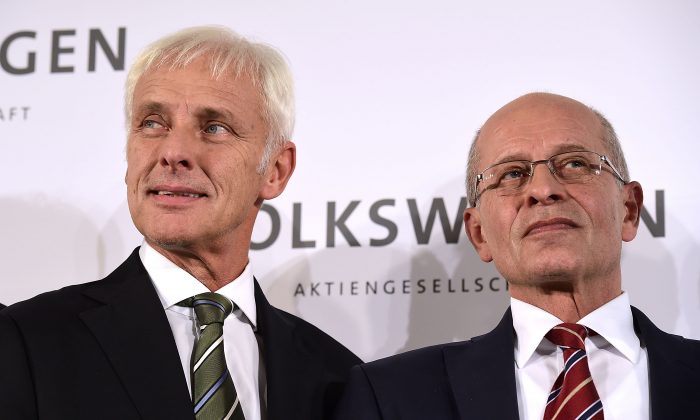 BERLIN— Volkswagen’s board appointed the head of its Porsche unit as CEO on Friday, handing longtime company insider Matthias Mueller the task of trying to lead the world’s top-selling automaker past a growing emissions scandal.

The company also said it was suspending some employees and would reorganize its North America operations after admitting it used a piece of engine software to cheat on diesel car emissions tests in the U.S.

The decisions come after the previous CEO, Martin Winterkorn, quit the job this week over the scandal, which has shredded the company’s reputation.

The company could be heavily fined and hit with class-action lawsuits costing billions. It will also have to fix programming it has said is in some 11 million cars worldwide, far more than the 482,000 identified last week by U.S. authorities.

The 62-year-old Mueller, who has spent his career with Volkswagen Group brands, acknowledged that he was taking the job “at a time in which our company faces unprecedented challenges. I have respect for this, but I am also facing this task with confidence.”

Speaking at Volkswagen’s headquarters in Wolfsburg, Germany, he said he would “do everything to win back the trust of our customers, our employees, our partners, investors and the whole public.

“We stand by our responsibility,” he said. “Occasionally, our and your patience will be tested, but … carefulness is even more important than speed.”

Mueller said it is “decisive that nothing like this ever happens at Volkswagen again. So we will introduce even tougher compliance and governance standards in the company.”

He pledged to make Volkswagen “an even stronger company.”

The main risk of VW’s decision to go with an insider is that some in the markets could consider Mueller “tainted” by association with the crisis, said Jason Hanold, managing partner of Evanston, Illinois-based executive search firm Hanold Associates.

The upside, he said, is that Mueller’s knowledge of the company offers the chance of “faster traction to help root out the problems within the organization.”

“He knows the group and its brands well and can immediately engage in his new task with full energy,” Huber said.

Winterkorn, who had been CEO since 2007, said he took responsibility for the “irregularities” found by U.S. inspectors in VW’s diesel engines, but insisted he had personally done nothing wrong.

Volkswagen offered few new details Friday on the fallout from the scandal.

“The supervisory board has, on the basis of current information, recommended suspending some employees immediately until the whole case is cleared up,” Huber said. “This has, in part, already happened.”

He did not elaborate, and a statement from Volkswagen did not specify who the employees were, at what level or where they worked.

The head of VW’s employee council, Bernd Osterloh, said that Volkswagen “needs a new beginning” with a “different company culture.”

Osterloh, who also sits on the supervisory board, said, “We need for the future a climate in which problems are not hidden but communicated openly to superiors.” He praised Mueller as a “team player.”

Mueller brings experience with several of Volkswagen’s 12 brands to his new job at the head of a sprawling automotive group with nearly 600,000 employees worldwide.

He was an apprentice toolmaker at Audi between finishing high school and studying computer science at Munich’s University of Applied Sciences. Mueller returned to Audi in 1978 and worked his way up to become head of product management for Audi, Seat and Lamborghini.

In 2007, Mueller became head of product management for the Volkswagen Group. He has been Porsche chief executive since 2010 and a member of parent Volkswagen’s management board since March.

Alongside Mueller’s appointment, the supervisory board also approved changes to the management structure aimed at scaling back complexity and strengthening brands and regions.

That includes a reorganization of the North America business under Winfried Vahland, until now chairman of the board of directors at Czech-based brand Skoda.

The company said Michael Horn will remain as president and CEO of Volkswagen Group of America, but its U.S, Canada and Mexico markets will be “combined and significantly strengthened” to form a new “North America region.”

The board called for hiring German and American lawyers “to objectively investigate and fully clarify the manipulation of emissions data of diesel engines.” It did not specify who they would be.

Volkswagen has yet to describe in full what cars contain the suspect software and where they were sold. On Friday, however, it said the vehicles include 5 million cars made by the core Volkswagen brand — with models such as the sixth-generation Golf, seventh-generation Passat and first-generation Tiguan containing the engines concerned.

In Germany, Transport Minister Alexander Dobrindt told Parliament that 2.8 million vehicles in Germany are affected — diesels with 2-liter and 1.6-liter engines and possibly with 1.2-liter engines. He said light commercial vehicles also have the engines.

German authorities asked Volkswagen whether it is able to eliminate the emissions manipulations and said they expected “a binding timetable” for finding a technical solution and implementing it, Dobrindt said.

As he announced Mueller’s appointment, Huber offered another apology for what he called “a moral and political disaster.”

“In the name of the supervisory board, I apologize in every way to our customers, the public, the authorities and investors,” he said. “I ask all of you: Give Volkswagen a chance to make good the damage and win back lost trust.”