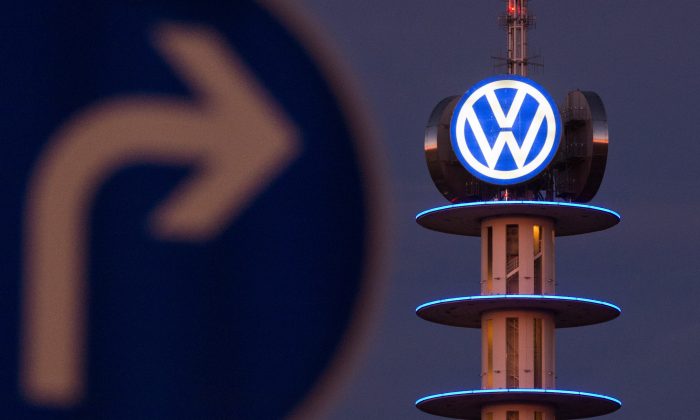 A street sign in front of an illuminated logo of German automaker Volkswagen in Hanover, Germany. (Julian Stratenschulte/AFP/Getty Images)
China

Volkswagen AG formed a partnership with a Chinese state-run company to jointly develop electric cars. The embattled German automaker is making a decision to double down in China, as it faces an increasingly challenged outlook globally following last year’s diesel-emissions cheating scandal.

Volkswagen will collaborate with China’s Anhui Jianghuai Automobile Co. (JAC) to develop and manufacture new energy vehicles (NEVs)—both fully electric cars and hybrid cars, which are powered by a combination of electric and gas combustion motors.

For one, Volkswagen owes a preliminary $15 billion fine in the United States following an embarrassing and well-publicized diesel emissions scandal—up to 11 million cars worldwide were fitted with software to cheat emissions testing. The company faces ongoing investigations in several other jurisdictions, including its home market Germany, and has set aside provisions of 18 billion euros ($20.2 billion) to pay for fines and costs of fixing affected vehicles.

Incidentally, Volkswagen’s China business is relatively untouched by the scandal. China has been Volkswagen’s biggest single market, maintaining high visibility by being one of the first foreign automakers to enter the country three decades ago.

Unlike the U.S. market—where year-to-date August sales are flat compared to 2015—demand for cars in China has been surprisingly robust in 2016.

China’s slowing economic growth hasn’t hampered auto sales. Last month, foreign and domestic automakers sold 1.8 million vehicles, an increase of 26 percent from last year, according to the China Association of Automobile Manufacturers. More than 14.4 million cars were sold to date in 2016, which is on pace to break last year’s 24.5 million record.

Analysts expect the strong sales to be temporary, however. A reduced auto sales tax, which 70 percent of cars sold in China qualifies for, is set to expire by the end of the year. Nonetheless, Chinese demand is still expected to outpace growth in U.S. and European markets.

Through July, Volkswagen sold 2.2 million cars in China, which amount to more than a third of the group’s global deliveries. The amount exceeded units sold in all of Western Europe. In the U.S. market, the Volkswagen brand’s sales fell 14 percent through July, according to Autodata, even as the rest of the industry witnessed gains of 1.3 percent.

For China to have assumed increased importance for Volkswagen since the diesel emissions scandal broke last September is only logical. In August, Volkswagen appointed company veteran Stephan Woellenstein to the newly created position of China CEO of Volkswagen, in an effort to “ensure future viability” for the brand in China, according to a statement from the group.

Beijing views electric vehicles as strategically important for China’s economic growth. The Chinese Communist regime hopes to boost nationwide fuel economy of new cars sold by 30 percent by 2020. Its goal is to make 3 million NEVs, such as electric and hybrid cars, per year by 2025.

Chinese sales of NEVs quadrupled last year to almost 330,000 units, exceeding the U.S. market as the biggest in the world.

Over the first six months of 2016, sales of NEVs have exceeded last year’s pace with 170,000 sold. Most of such cars sold are domestic marques such as the BYD Tang and the Kandi Panda.

Volkswagen currently has two existing joint ventures in China, with SAIC and FAW Group Corp. China mandates all foreign automakers wishing to produce vehicles in China to form domestic joint ventures as a way to force transfer of foreign technology to local producers.

While foreign-domestic joint ventures are capped to two partnerships in producing gasoline-powered cars, there’s no limit on electric vehicles.

Volkswagen picked a relatively unknown partner for its NEV development in China. JAC is the country’s ninth largest automaker and the joint venture with Volkswagen marks its first with any foreign company. JAC was an early entrant in the Chinese electric vehicle market, launching the JAC J3 EV in 2010 with a range of around 80 miles. The company said its NEV sales through June more than tripled from a year before, though exact figures were not disclosed.

China is exploring consolidation of the electric-vehicle startup industry, paving the way for established state-owned enterprises such as JAC to dominate domestic market share.

Currently, there are more than 200 NEV startups backed by private capital. The Ministry of Industry and Information Technology recently imposed strict technology and compliance standards, listing 17 technologies that NEV startups must implement to ensure “healthy” growth of the industry. According to Bloomberg, such standards include a control system to determine performance and safety of NEVs, an information system to track the sources, uses, and conditions of parts, and a process to recycle or reuse batteries.

On the surface, the measures aim to regulate growth of NEV startups. But the Ministry could have designs to shrink the number of startups in this space.

Economic Times, the State Council’s newspaper, said the new restrictions would wipe out over 90 percent of China’s NEV startups. The report went as far as to suggest that China’s Ministry of Industry and Information Technology is considering capping the number of Chinese NEV startups at 10, not including state-owned companies already developing NEVs.

And that should weed out the competition for Volkswagen in China.