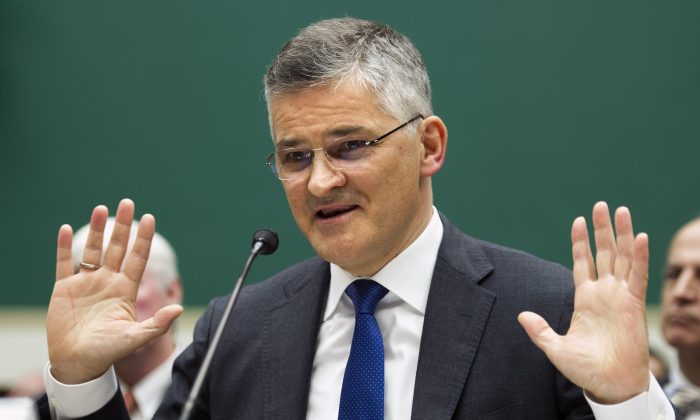 VW Executive Apologizes but Says Scandal Not His Fault

WASHINGTON — Volkswagen’s top U.S. executive offered deep apologies yet sought to distance himself Thursday from the emissions scandal enveloping the world’s largest automaker. He asserted that he and other top corporate officials had no knowledge of the cheating software installed in 11 million diesel cars.

Though he said he hadn’t been briefed on the preliminary findings of the ongoing internal investigation, Volkswagen of America CEO Michael Horn told a congressional subcommittee that a tiny group of software developers in Germany was responsible for the computer code that enabled the cars to trick U.S. government emissions tests. Three lower-level managers have been suspended.

“To my understanding this was not a corporate decision, this was something individuals did,” Horn said, adding that he felt personally deceived.

That explanation left members of the House panel investigating the scheme incredulous.

Rep. Chris Collins, R-N.Y., was among the lawmakers who said he could not accept VW’s characterization that “this was the work of a couple of rogue engineers.” He added, “This didn’t happen in one day.”

Collins, an engineer, said it appears that VW executives “are complicit in a massive cover-up at the highest levels that continues to this day.”

For more than two hours, Horn, the 51-year-old German, sat calmly, occasionally sipping from a cup of water as news photographers’ camera shutters clicked away. As the elected officials expressed anger, disappointment and skepticism at the company where he has worked for nearly half his life, Horn apologized but provided little new information.

More than a month after the company first confessed the emissions-rigging to U.S. regulators, Horn said it doesn’t yet have a detailed plan for fixing the nearly 500,000 “clean diesel” cars sold in the U.S. with the suspect software since the 2009 model year. Such a solution will likely take up to two years, he said, adding that each car might require between 5 and 10 hours’ work by a mechanic to meet clean air standards.

The cars are safe to drive, the government says, but Horn suggested Volkswagen could compensate some owners, possibly by paying them for the lost value of their vehicles.

Shortly before Horn began his testimony, German police and prosecutors raided VW’s global headquarters in Wolfsburg and other locations seeking material that would help clarify who was responsible for the cheating. The searches were intended to “secure documents and data storage devices” that could identify those involved in the alleged manipulation and explain how it was carried out, prosecutors said.

In the U.S., the Environmental Protection Agency and the Justice Department are conducting a criminal investigation. VW also potentially faces billions in fines for violating the Clean Air Act, as well as a raft of state investigations and class-action lawsuits filed on behalf of customers.

Horn said VW plans to withdraw applications seeking U.S. emissions certifications for its 2016 model Jettas, Golfs, Passats and Beetles with diesel engines. That raised questions about whether a “defeat device” similar to that in earlier models is also in the new cars.

By withdrawing the applications for the 2016 models, VW is leaving thousands of diesel vehicles stranded at ports nationwide. It was not immediately clear what a newly revealed device found in the new VW models does, or when the company might resubmit the applications needed to sell the cars.

Liz Purchia, an EPA spokeswoman, said VW recently gave the agency information on an “auxiliary emissions control device.” The EPA and California Air Resources Board are investigating “the nature and purpose” of the device, she said.

The lack of certification is bad news for American VW dealers who had hoped to put the new models on sale soon. For some dealerships, the diesel models account for about one-third of sales.

During the hearing, lawmakers from both parties fondly recalled their first VWs before hammering the iconic company for betraying the public’s trust.

Rep. Fred Rep. Fred Upton, R-Mich., chairman of the House Energy and Commerce Committee, said Volkswagen “has long enjoyed an almost cultish following dating back to the Beetle. But through the years something apparently became rotten in Wolfsburg and cheating and betrayal became part of the VW game plan.”

It was Rep. Morgan Griffith, a Virginia Republican, who most directly channeled the anger and hurt of Volkswagen’s customer base.

He recounted that when his mother could afford her first new car, she bought the stick-shift Volkswagen Squareback on which he learned to drive. He inherited his grandmother’s 1972 Super Beetle, which he still owns.

“I’m your consumer,” Griffith told Horn, his voice stern. “I’m your VW driver who has always trusted your company, and I’m very disappointed.”