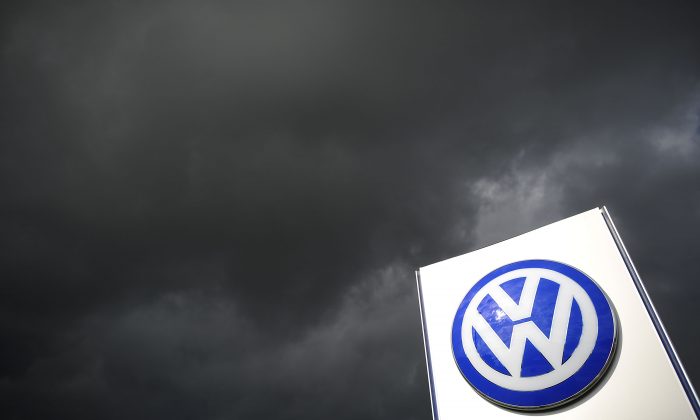 Rain clouds are seen over a Volkswagen symbol at the main entrance gate at Volkswagen production plant in Wolfsburg, Germany, on on Sept. 23, 2015. (Alexander Koerner/Getty Images)
Business & Markets

VW Diesel Owners to Get $1,000 in Gift Cards and Vouchers

DETROIT—Owners of 482,000 diesel Volkswagens and Audis in the U.S. are eligible for $1,000 in gift cards and vouchers as the automaker strives to placate customers dismayed by an emissions-rigging scandal.

VW announced the offer Monday. The car owners have been in limbo since mid-September, when VW admitted the cars are equipped with software that turns on pollution controls during government tests and turns them off while on the road.

VW has yet to unveil a fix for the cars. The U.S. Environmental Protection Agency says the cars, with 2-liter four-cylinder diesel engines, emit 10 to 40 times the allowable amount of harmful nitrogen oxide while being driven.

“The problem that most of us suffer from is we’re in never-never land so this at least gives us some compensation until they figure it out,” said Bob Rand, a retired judge in Pasadena, California, who says he and his wife have owned at least a dozen new Volkswagens over the years.

The $500 Visa gift card can be used anywhere, while the $500 voucher can be used at a VW dealership for things such as an oil change or new set of tires, or even a down payment on a new car. The offer also includes free roadside assistance for the diesel vehicles for three years.

“We are working tirelessly to develop an approved remedy for affected vehicles,” said Michael Horn, VW’s U.S. CEO, said in a statement. “In the meantime we are providing this goodwill package as a first step towards regaining our customers’ trust.”

Steve Kalafer, chairman of the Flemington Car and Truck Country dealerships in Flemington, New Jersey, said Volkswagen’s offer is a welcome first step after a long silence between the automaker, its customers and its U.S. retailers.

Kalafer said he hasn’t heard yet from any customers about Volkswagen’s offer, but he expects they’ll want more from the company to address the many issues raised by the emissions scandal.

“They will appreciate the communication, but I imagine that until a real resolution is found that appreciation will be muted,” he said.

Whatever fix VW designs could wind up hurting performance or perhaps fuel mileage, the two main reasons why people buy diesels. More than 200 class-action lawsuits have been filed in the U.S. against VW alleging that the scandal caused the diesel cars to drop in value.

Josh Badall, of Phoenix, Arizona, just sold his 2009 Jetta TDI because of the scandal as well as a host of mechanical problems.

“I don’t think solving it in a retrospective manner like that really changes a whole lot of anything, especially considering the value of those vehicles now is pretty bad,” he said.

To get the gift cards and vouchers in the U.S., owners will not be required to sign anything giving up their right to sue Volkswagen or force them into arbitration, spokeswoman Jeannine Ginivan said. “There are no strings attached,” she said.

Volkswagen already is offering $2,000 to current VW owners to trade in their cars for new vehicles, and the gift cards and vouchers would add $1,000 to that.

VW said that its Audi luxury brand would launch the same program on Friday.

Meanwhile, Germany’s Transport Ministry said Monday that of the 2. 4 million vehicles being recalled for fixes in Germany, regulators “currently expect that approximately 540,000 will also need hardware changes” as well as software changes. It says Volkswagen will inform owners of the details.

The company is recalling 8.5 million 2009-2015 model year cars with the software across Europe, starting next year. It says about 11 million cars worldwide have the software.

Also Monday, Fitch, the credit rating agency, downgraded Volkswagen’s debt by two notches to reflect the potential financial costs of the scandal as well as the management problems that led to the crisis in the first place.

The scandal expanded last week, when the EPA accused VW of cheating with different software on larger six-cylinder diesels in about 10,000 vehicles. VW is still discussing those results with the EPA, and those vehicles aren’t included in the gift card offer.

VW also acknowledged finding irregularities in carbon dioxide emissions in 800,000 other vehicles, all outside the U.S. Some of those were powered by gasoline engines.