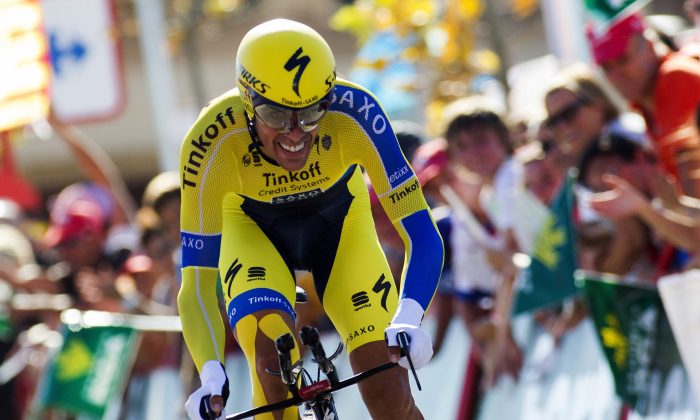 The first individual Time Trial of the 2014 Vuelta a España was expected to shake up the General Classification but other than the stage win going to three-time world TT champ Tony Martin, no part of the day’s results were expected.

The day started with Movistar’s Nairo Quintana in red, followed by Tinkoff-Saxo’s Alberto Contador and Movistar teammate Alejandro Valverde in third. Sky’s Chris Froome, fifth at 28 seconds back, was considered the favorite of the GC contenders; he was expected to take a healthy lead over the 37-km course.

When the stage ended, Alberto Contador led overall, with Valverde 27 seconds back. Chris Froome lost over a minute, and Nairo Quintana crashed and lost three-and-a-half.

Omega Pharma-QuickStep’s Tony Martin triumphed on the 36.7-km course which was effectively divided into three sections.

The first third sloped uphill over narrow, twisting roads with broken pavement—a serious challenge for riders on time-trial bikes. The middle was a Cat 3 climb and descent, again on bad pavement. The final third of the course covered wide, flat roads, perfectly suited to TT specialists—provided they could get over the climb in good shape.

Here is where things got interesting. Alberto Contador finished fourth overall, and won the race leader’s red jersey with a time of 47:41—not too bad for a man who broke his leg six weeks ago.

Contador, who came to the Vuelta saying he might try for a stage win in the final week, changed his tune after Stage Nine, when he dropped both Froome and Quintana with a late attack on the summit finish.

Monday Contador told a press conference, “I can now confirm that I am going to try and win the Vuelta. It is another thing whether I have the legs to do it or not.”

The Tinkoff team leader crashed in Stage Ten of the Tour de France, breaking his tibia and injuring his knee. He originally said he would not ride the Vuelta; then a week before the race, he announced that he would participate, and might try to win a mountain stage late in the race.

Now the two-time Vuelta champ is back in red, and showing better form than any of his rivals.

“I’m very pleased. I’d never have thought this was possible when I started the Vuelta,” Contador told Cyclingnews.com.

“I’m racing this now without any pressure, I will take this day-by-day and the rest of what happens in this race is not yet clear. If I win it, great, but either way, I’m tremendously satisfied with what I’ve done so far.”

Movistar started the Vuelta with a serious issue on its hands: two riders, Nairo Quintana and Alejandro Valverde, were both legitimate contenders to be team leader.

The 24-year-old Colombian Quintana was the surprise winner of the Giro d’Italia this year, gaining three minutes on his rivals in the final week in the high mountains. He rested for more than two months before the Vuelta—enough to fully recover, but possibly enough to lose his edge. Still Quintana was far and away the best climber on the team, and the Vuelta would likely be won or lost in the mountains.

Movistar also had Alejandro Valverde. At 34, the Spanish rider is in the twilight of his career, but he is also having one of the best years of his career. This former Vuelta winner (2009) finished fourth at the Tour de France; if his legs hold up, he could be Movistar’s best bet in the Vuelta. If, however, the strain of two Grands Tours in a row left him unable to keep up in the final few mountain stages, Movistar would be sunk.

Movistar said the course of the race would decide the team leader—whichever one did best would get the support of the team.

Valverde certainly seemed to be working on behalf of Quintana on the summit finish of Stage Six. The Spanish veteran pulled hard for the younger Colombian on the final climb, setting a high pace to discourage attacks. Finally Katusha’s Joachim Rodriguez made a move with 700 meters left in the stage. Valverde immediately leaped on the Katusha rider’s wheel; Chris Froome and Alberto Contador grinded their way across the gap, and Nairo Quintana, his strength sapped by the intense heat, couldn’t respond.

Valverde took the red jersey, 15 seconds ahead of his teammate Quintana in GC, 8 ahead of Froome and 22 up on Contador.

Froome took three seconds back in Stage Seven with a mad dash in the closing meters, but this showed nothing of his form; it was merely a smart tactic. However, Froome also crashed in this stage; after crashing three times in two days and being forced out of the Tour, and also crashing in the Dauphiné before the Tour, and in training after the Tour, it was a question of how much this latest impact affected him. He seemed fine, but adrenaline masks many ills.

Stage Eight was a sprinters’ stage; Stage Nine was another summit finish, and here Contador attacked, dropping both Froome and Valverde. Quintana held on Contador, crossing the line instants behind to move into red. Contador advanced to second and Valverde dropped to third overall. The answer to Movistar’s dilemma was in no way clarified.

Movistar’s Nairo Quintana crosses the finish line of Stage Ten of the Vuelta a España after crashing and losing more than three minutes. (Jaime Reina/AFP/Getty Images)

After Monday’s rest day, Stage Ten Tuesday was a time trial which didn’t particularly suit the time trial specialists. While Chris Froome was certainly the favorite of the GC contenders, Quintana, who won the Giro’s final time trial, and Valverde, the Spanish National TT champ, both looked good. Contador can be hit-or-miss in time trials, but the uphill portion would surely favor him— and he had won the Spanish TT title in 2009. He was well-versed in running the “race of truth.”

Riders started in reverse order. Tony Martin and Fabian Cancellara set their amazing times, as expected. Rigoberto Uran surprised a lot of people, but no one really expected him to be a podium contender late in the race.

Chris Froome took off, and beat Tony Martin’s time through the first time check, but fell far behind on the climb. Normally an excellent climber, Froome looked to be struggling with the nine-percent grade. The Sky rider, considered by far the fastest of the GC contenders in a TT, was having a terrible ride. Possibly he didn’t ride enough on the rest day, or rode too much, but he didn’t look like himself on the climb or on the final flat portion, finally crossing the line tenth, 1:32 behind Tony Martin. Froome stayed fifth in GC, 1:18 off the lead—a huge gap considering the competition.

Alejandro Valverde beat Froome by 31 seconds, finishing eighth on the stage and second in GC, 27 seconds back.

Alberto Contador was even quicker than Froome in the first section—quickest of any rider in fact—and kept up a strong pace even on the flat final section. The Tinkoff rider finished fourth, 39 seconds behind Tony Martin, moving into first place in the General Classification by 27 seconds.

With Contador finished, only Nairo Quintana was left on the course. His first split was slower than Valverde’s but a little quicker than Froome’s. The Colombian climber had no difficulties with the uphill section, but when he hit the descent, he hit trouble.

For some reason Quintana felt a need to adjust something on his right shoe just after cresting the climb; maybe the buckle was too tight? In any case, he took his eye off the road, missed the entrance to a corner, hit the guardrail and endoed, landing hard flat on his back.

Quintana rolled over, then laid flat on his back for a while, probably winded and a little stunned. Thankfully he was able to get to his feet and remount his bike; apparently nothing was broken, but the crash cost him about two minutes, and he lost another ninety seconds because he couldn’t focus well for most of the rest of the stage.

The young rider dropped from the race lead to eleventh overall, 3:25 behind Alberto Contador. Surely this ends his chances of winning, or even finishing on the podium.

Alejandro Valverde rode an excellent TT, and is only 27 seconds behind Contador—but the real mountains have yet to take their toll on his legs, which have already logged a lot of miles.

No one knows how Alberto Contador is really feeling, or how his legs will react to the highest peaks and steepest climbs, day after day, in the closing stages. Will his newly healed tibia support the strain of all-out climbing day after day?

Chris Froome might have been having an off day, or the continual crashing might be taking a toll. Since breaking his wrist in the Tour, Froome hasn’t logged the training miles he might usually to prepare for the Vuelta; he might be ready for the really tough climbs or he might not. Or, he might ride himself into form by the final week and be the quickest man on the course.

No one, not even the riders themselves, know how their bodies will react to the six remaining summit finishes which will probably determine the overall winner. It could well be that Nairo Quintana, as far behind as he is right now, can put in a series of rides like the ones that won him the Giro in May.

Stage 11 might help sort things out more clearly. 154 km from Pamplona to Santuario de San Miguel de Aralar, the stage finishes with a Cat 1 climb, ten km at an average of 7.5 percent and a ramp of 14 percent in the final couple kilometers.

In the United States, Universal Sports will broadcast most of the stage live, starting at 10 a.m. EDT. Eurovision, RTV, Sporza and other regional networks also carry coverage. Cyclingnews.com will have a live ticker, and Cyclingfans.com usually has a list of links. Check Steephill.tv for information for your region.