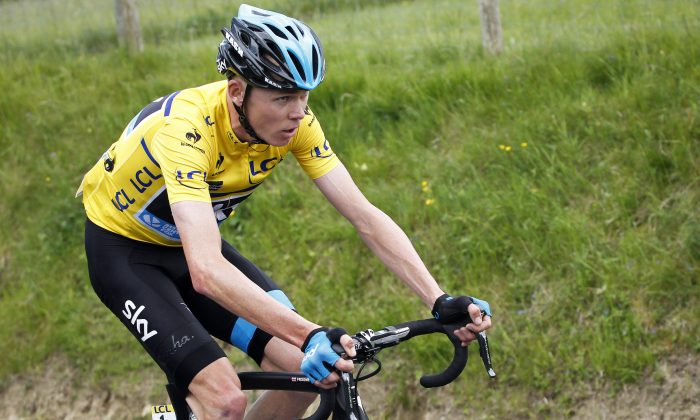 Chris Froome of Team Sky climbs the Col du Beal during Stage Two of the Criterium du Dauphine, on June 9, 2014. If he is healthy, the Sky leader has the best chance to win the Vuelta. (Kristof Van Accom/Getty Images)
Cycling

The 69th Vuelta a España, the final Grand Tour of the 2014 cycling season, kicks off Saturday, August 23 with a team time trial in Jerez de la Frontera, Spain and wraps up on September 14 after 21 stages and 1875 miles of racing with an individual time trial Santiago de Compostela, Spain.

Between the first stage on Saturday and the final Sunday riders will compete in the team time trial, two individual time trials, ride eight mountain stages and struggle up seven summit finishes: a Cat 2, five Cat 1s, and two HC.

There are also plenty of flat stages but many of these feature short—or long—uphill finishes which will really test the legs of the sprinters.

The race will be broadcast in the U.S. on the Universal Sports Network and in Europe on Eurosport, in Spain on RTVE, and in Australia on SBS, starting with Stage 14. Several other national or regional stations offer highlights or live coverage: check Steephill.tv or CyclingFans.com for listings of daily coverage.

There is no single clear favorite to win the Vuelta this year. Several riders have excellent chances, but injuries and fatigue from the long season of cycling have left many of the top riders in questionable condition.

Sky’s Chris Froome has to be the strongest contender—depending on how well he has recovered from the fractured wrist and hand he suffered in the Tour de France in July. If the Sky team leader has his health and his form, look for Froome to make up for not being able to defend his 2013 Tour win, by riding home in the red jersey in the Vuelta.

Movistar’s Nairo Quinatana might have rested sufficiently after winning the Giro d’Italia in May. The 24-year-old Colombian hasn’t raced for two and a half months, so his legs should feel fresh. Unless the layoff was too long, and the young Colombian isn’t quite on form. If both he and Froome are one hundred percent, look for these two to fight for the General Classification win—with a slight edge going to Froome.

Quintana’s teammate Alejandro Valverde is listed as co-leader—Movistar is waiting to see if Quintana is fresh or stale, and whether Valverde has his legs back after riding to fourth place in the Tour de France. At 34, Valverde is still probably in his prime, so back-to-back Grands Tours should be possible—the 2009 winner is having his best year since that season, and the two time trials favor him. Still, he is not in a league with a healthy Chris Froome.

Katusha’s Spanish leader Joaquim Rodriguez has turned from a steep-hill puncheur to a GC contender in the last few seasons, and he would dearly love to win his home Grand Tour. He has come close but has never won a Grand Tour; his ultimate potential is unknown. However, early-season crashes left him barley able to start the Giro. if he has healed and trained enough, he could be a surprise contender.

At age 33 Ryder Hesjedal is in his cycling prime. Still, the 2012 Giro d’Italia winner hasn’t really shown front-runner potential in the past two seasons. After finishing ninth in the Giro this year, he should be well rested and ready, but isn’t a real threat.

Finally, there is Alberto Contador leader of the Tinkoff-Saxo squad. Contador was considered unlikely for the Vuelta until a surprise announcement on August 14th that he had recovered from the broken leg he sustained in Stage Ten of the Tour. It is highly improbable that the Spanish rider has anything like real racing form only six weeks after breaking his shin. Contador said he planned to contest a couple mountain stages, hoping for a win, probably on a day when the GC contenders were too busy to mark him.