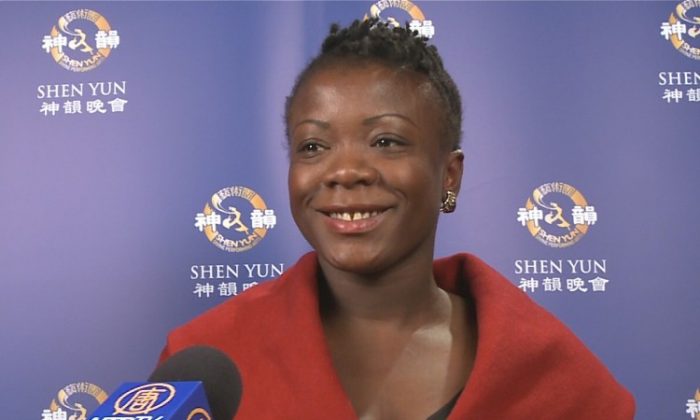 LONDON—When Anoma Langa, television programming manager for Vox Africa, came to see Shen Yun Performing Arts at the London Coliseum on Sunday, April 15, she didn’t know much about the background of classical Chinese dance. After seeing Shen Yun, she shared about her wonderful experience.

“I really, really enjoyed it,” she said. “It was ‘wow’. It’s just wonderful. … I was completely blown away.”

Shen Yun deftly harmonises the heart of its performance—classical Chinese dance—with a digital backdrop, an orchestra that combines East and West, and colourful, handmade costumes.

“Really, really nice combination of classical and then Chinese music, but also the visual aspect,” said Ms. Langa. “It was just mind-blowing. The video background, the synchronisation—everything. Like the dance, it was just absolutely fantastic.”

Based in New York, Shen Yun tours the world reviving the 5,000-year-old divinely inspired Chinese culture after communist rule in China nearly destroyed it, according to the company’s website. “However, the deeper spiritual core of the ancient culture, with its values of benevolence, honour, propriety, wisdom, and sincerity, as well as a reverence for the gods and the heavens, cannot be destroyed.”

“I liked the combination between spirituality and [the] history of China itself,” said Ms. Langa. “Most of us might not know about such a strong history [of] 5,000 years. I think the message was really [the] spiritual aspect of the Chinese people.”

Ms. Langa saw the values of friendship, as well as other positive aspects such as righteousness and goodness, throughout the performance.

“The message for me that the show carried, no matter what, goodness always triumphs,” she said.

Several dances, set in modern China, show the compassion and tolerance of Falun Dafa practitioners in the face of persecution by the Chinese Communist Party.

Falun Dafa is a mediation practice guided by the principles of truthfulness, compassion, and tolerance, and has helped more than 100 million Chinese people understand and return to the essence of traditional Chinese culture, explains Shen Yun’s website.

For Ms. Langa, who is already looking forward to Shen Yun visiting London next year, the performance ultimately was beneficial in more ways than one.

“I feel lighter,” she said. “I feel really like I’ve learned much more than only where we have film, Chinese film, but seeing a different kind of visual performance. I felt much more knowledgeable.”