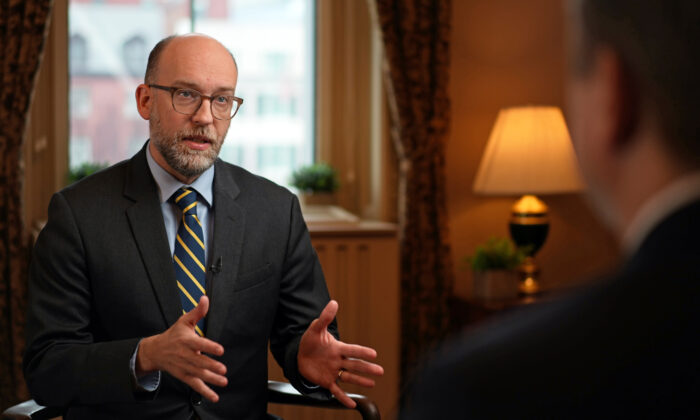 Russ Vought, Director of the White House Office of Management and Budget, in his office in Washington on Dec. 15, 2020. (Tal Atzmon/The Epoch Times)
US

Russ Vought, who served as Office of Management and Budget (OMB) director during the Trump administration, had a plan, but too little time left in 2020 to restore the federal bureaucracy as a neutral tool for ensuring that officials do what American voters want done by their government.

But Vought will be ready from the get-go when, he hopes, the next Republican enters the Oval Office in January 2025. If he succeeds, Vought will accomplish something that has eluded presidents of both parties since before World War I, when Woodrow Wilson turned federal civil servants from neutral implementers into unaccountable policymaking “experts.”

Wilson upended the neutral federal workforce concept established by the Templeton Act of 1888, which replaced the former “to-the-winner-goes-the-spoils” system that had been in force for a century.

Wilson wanted policy experts in the bureaucracy, in whom would be vested immense independent powers to regulate U.S. society as they thought proper. That led to an explosion of regulations, including many intended to protect the newly muscular bureaucracy from electoral accountability.

Two of Wilson’s Democratic successors—Franklin D. Roosevelt and the New Deal and Lyndon B. Johnson’s Great Society—expanded the federal bureaucracy into such an unwieldy, cumbersome, and costly regulatory monster that another Democrat, President Jimmy Carter, made it one of his administration’s chief goals to gain passage of the landmark Civil Service Reform Act (CSRA) of 1978.

However, it fell to Carter’s successor, Republican Ronald Reagan, to implement the CSRA, which included multiple provisions designed to make bureaucrats more accountable for their individual performance and easier to replace poor performers.

“It worked for a few years but was fought throughout by OMB, which moderated CSRA during its legislative journey through Congress and then, afterward, helped agency experts and allies in Congress to modify CSRA’s reforms,” Donald Devine, the former director of the U.S. Office of Personnel Management (OPM) who managed the CSRA implementation for Reagan, wrote recently.

“Today, we are basically back to the system Carter was elected to change—but worse, as aspects of his reforms are now forbidden by both law and regulation,” he continued.

That was the situation when Vought became acting OMB director under Trump in 2019. Having served on Capitol Hill in various Republican policy positions for two decades, Vought was already familiar with entrenched bureaucrats repeatedly undermining common sense, conservative policy directives.

When the Senate confirmed him to the position the next year, Vought began taking concrete steps to address the problem.

What became known as “Schedule F” was a presidential executive order (EO) designed to extend the application of CSRA’s basic principle of policy and performance accountability deeper into the bureaucracy. It gave the president’s appointees throughout the departments and agencies more flexibility to replace recalcitrant bureaucrats in “confidential, policy-determining, policy-making, or policy-advocating” positions.

But there were so many fires to put out during the Trump era that Vought only had 13 days before the 2020 election to implement his plan, and then only within OMB, where he reclassified an estimated 90 percent of the agency’s employees.

“We had been working on it for about two years and we were really trying to think through when we do it,” Vought told The Epoch Times in an interview. James Sherk, a Trump domestic policy adviser and former Heritage Foundation analyst, is credited with the original concept for Schedule F.

“A lot of my effort was to help get it across the finish line and then to show that an agency head was willing to use it, and then set down a marker that we would indeed do it in a second [Trump] term,” Vought said.

One of President Joe Biden’s first acts in office after defeating Donald Trump in the still-contested 2020 presidential election was to repeal the EO that created Schedule F. Since then, Vought founded the Center for Renewing America, a 501(c)(3) tax-exempt think tank devoted to researching the case for and laying out policy frameworks for the continuation of the “America First” reforms that had been advanced by Trump.

That continuation could be carried out either by a resurgent Trump or by another of the GOP’s potential alternative presidential candidates such as former Secretary of State Mike Pompeo, Florida Gov. Ron DeSantis, or former U.S. Ambassador to the United Nations Nikki Haley.

But a July 22 Axios story—”A Radical Plan for Trump’s Second Term” by Jonathan Swan—renewed concern throughout the Washington establishment that Schedule F will be among the top items on the policy agenda of any GOP president seeking to make significant headway toward reforming the Washington “swamp.”

One detail that gained particular notice was Swan citing an unnamed source who estimated that full-scale implementation of Schedule F could affect as many as 50,000 civil service positions.

There are approximately 2.1 million civilian federal employees, but only about 9,000—or 0.43 percent of the total—of those positions are at-will, political appointees of a president. Assuming Swan’s 50,000 figure is accurate, it would still mean only 2.4 percent of the total workforce would be subject to Schedule F.

“I think any time you are setting policy within an agency, think about your entire regulatory departments, think of all those general counsels, and it’s not just the general counsels but those massive legal departments,” Vought said, when asked to describe the kinds of jobs that would be subject to Schedule F.

“I think it would be pretty sizable, given how many people you have working on policy these days in the agencies.”

Under the Trump EO, the ultimate decision about whether to reclassify a career position to Schedule F status would be made by the OPM director, a fact that would substantially elevate the importance of that presently obscure agency.

Vought has no illusions about the difficulties a future president would face if he or she attempts another run at Schedule F implementation.

Democrats in Congress who receive the overwhelming majority of federal employee union political donations are already rallying against the possibility of a Schedule F renewal. The American Federation of Government Employees (AFGE), the largest such labor group, steered more than 94 percent of its contributions to Democrats in 2020, continuing a decadeslong trend.

In the House of Representatives, Rep. Gerry Connolly (D-Va.) whose district is made up almost exclusively of government employees and contractors, authored a provision adopted by the lower chamber to prevent the implementation of Schedule F.

In the upper chamber of Congress, Sens. Tim Kaine and Mark Warner of Virginia; Ben Cardin and Chris Van Hollen of Maryland; and Diane Feinstein and Alex Padilla of California are co-sponsoring the Connolly provision.

The mainstream news media inaccurately portrayed Trump’s Schedule F effort as an attempt to return to the old “Spoils System” that was abolished in 1888. Typical was an Oct. 23, 2020, Washington Post story headlined “Trump’s Historic Assault on the Civil Service Was Four Years in the Making.” In fact, Schedule F is based on the CSRA that was conceived and signed into law by a Democratic president, then implemented by a Republican.

Vought is confident that as long as a GOP presidential aspirant makes reforming the federal bureaucracy a national issue, the Schedule F plan will go forward.

“How would they not? The only reason it wouldn’t be used is because no one would have wanted to take on the [opposition] forces, but, in some respects, that balloon has already been punctured,” he said.

“When you nationalize the issue heading into a presidential election, it makes it so this is part of the base of policy expectations in a way that it is not when someone just has a good policy idea and you’re trying to figure is this a good idea and will it sustain itself.”