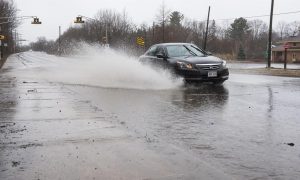 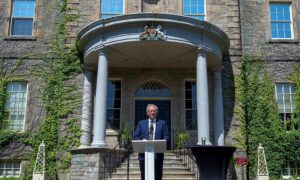 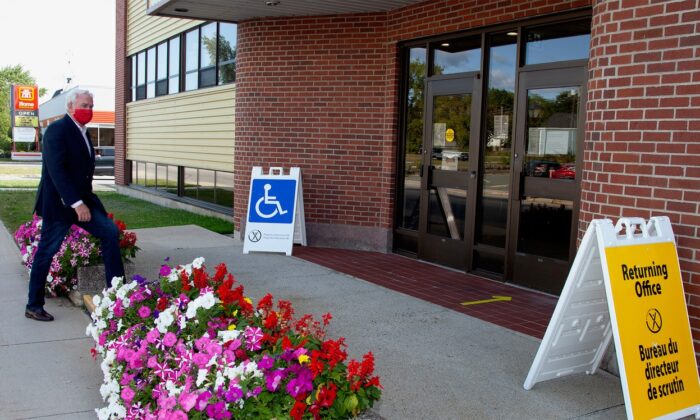 New Brunswickers are heading to the polls today in the country’s first provincial election since the start of the CCP (Chinese Communist Party) virus pandemic, after only a month of low-key campaigning.

After casting his ballot at a church hall in his riding of Quispamsis, Progressive Conservative Leader Blaine Higgs said voting went smoothly, despite COVID-19 restrictions.

“Well, that was well set up,” Higgs told reporters. “It was very well organized, very disciplined.”

Thanks to health and hygiene rules there was no handshakes, no kissing of babies, no rallies, and no community barbecues during the province’s 28-day campaign.

Much of the low-key campaign was conducted on social media, though there was some door-to-door campaigning—all done at a safe distance.

Higgs said the biggest difference he noticed at the polling station was the hand sanitizer and everyone wearing masks.

“This is just another example that democracy will continue. We were confident we could make this work safely,” he said.

Higgs called the election only 21 months into his first term, saying his minority government needed stability and a majority to govern a province initially left reeling by the pandemic.

He said Monday said he’s hoping to break the string of one-term governments in the province.

“It’s time to change that. It has hurt our stability here in the province and it certainly would hurt it now at a time like this if we got into that again,” he said.

Voters exiting polling stations said they were surprised by how smoothly the voting process went, saying the only difference they noticed from previous elections was the physical distancing and use of masks.

Lineups were reported at a few polling stations, and there was a heavy turnout during the advance polls.

At dissolution, there were 20 Tories, 20 Liberals, three Greens, three People’s Alliance members, one Independent, and two vacancies. At least 25 seats are needed for a majority in the 49-seat house. Recent polls put the Tories well ahead of their rivals.

Road to the Polls

Liberal Leader Kevin Vickers cast his ballot shortly after the polls opened in Miramichi. He said the campaign had been a challenge, though he said online tools were used to get the party’s message out to the public.

Vickers expressed his concerns back in July about an election during the pandemic and proposed to wait until March 2021.

Higgs instead proposed keeping his minority government in power for the next two years, or until 30 days after the pandemic is over.

However, talks about the proposal with four of the political parties in New Brunswick failed to come to an agreement in August.

Green party Leader David Coon—who in 2014 became the first Green elected to the legislature—had accused Higgs of attempting a power grab. As for the People’s Alliance, led by Kris Austin, the party had agreed to prop up the Higgs government for 18 months after the 2018 election. When that deal expired, Higgs asked the other parties to keep him in power until 2022 or until the pandemic had been declared over.

Higgs ended up asking the Lieutenant Governor to dissolve the legislature in mid-August.

A month later, the voting polls are open.

Kim Poffenroth, the province’s chief electoral officer urged voters to use advanced polls and mail-in ballots to reduce line-ups at the polling stations.

Advance polls took in some 133,000 votes or about one-third of the votes taken in for the 2018 provincial election.

Polling stations across the country will be watching to learn from this election as to how to deal with social distancing, protective gear, and the use of sanitizer, for the coming elections such as in Saskatchewan in October.

Previous polling for the election suggested Higgs has a strong position, even though calling for a snap election has been a point of contention in the campaign.

Higgs campaigned on his party’s managing of the outbreak and maintaining stability for an economic recovery.

Vickers touted the all-party cabinet committee as being important in overseeing decision-making during the pandemic over the spring and summer and praised Dr. Jennifer Russell, the province’s chief medical officer of health.

On the campaign trail, Vickers often told voters of Higgs’s alleged “secret plan” to make deep cuts to public services including health care should he win a majority.

Higgs has vowed not to close any emergency rooms or reduce hours in hospitals, despite trying to do so in February, saying he “can’t in good conscience move forward without addressing the concerns and fears that have been brought to light.”

New Brunswick has a history of two consecutive terms in office since confederation, except for the previous four terms. Higgs hopes to bring back that trend. He has been in office for two years, and if he wins he will break the streak over the past four elections of having only single term victories in New Brunswick.

The last election in New Brunswick was a close race when Higgs won 22 seats while the Liberals won 21 seats. The greens and the Alliance both got three seats.

To win a majority government this time around, Higgs will need to win 25 seats. However, the PCs do not have 49 candidates in the race. The PCs, the Liberals, and the Alliance all decided to dismiss candidates last week for offensive social media posts all regarding marginalized groups.

Fredericton North is a riding to watch as the same candidates have a re-match. Liberal Stephen Horsman was the victor in 2018 with a mere 261-vote win over Jill Green as a Progressive Conservative.

Fredericton York is held by Alliance. PC wants to win this seat back tonight.

Miramichi is where Vickers is running and it is currently held by Michelle Conroy of the People’s Alliance who won a surprise victory in 2018.

Other ridings to watch for a close race and that will influence the outcome of this election are Moncton South and East, both won by Liberals in the previous election.