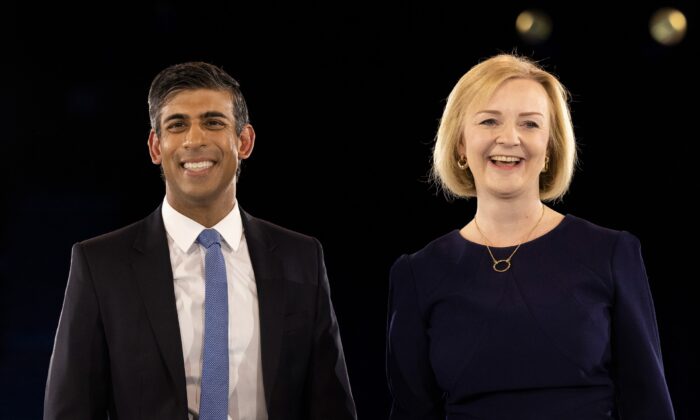 The final day of voting in the UK Conservative Party leadership contest has begun, with the result set to be announced on Sept. 5.

Either Foreign Secretary Liz Truss or former chancellor Rishi Sunak will be announced as the new party leader and UK prime minister next week.

Outgoing Prime Minister Boris Johnson and his successor will then go to Balmoral Castle in Scotland rather than Buckingham Palace for the appointment of the new prime minister, in a break from tradition.

The Queen, who is suffering from ongoing mobility issues, will receive Johnson on Sept. 6 at her Aberdeenshire home, where he will formally tender his resignation.

This will be followed by an audience with the new Tory leader, where he or she will be invited to form a government.

The new prime minister will need to hit the ground running, with rising energy bills, train strikes, and both a winter crisis in the NHS and a recession looming, not to mention the conflict in Ukraine.

Sunak and Truss made their final pitches to Conservative Party members at a leadership hustings in London on Aug. 31, with the debate dominated by the rising cost of living.

Truss, widely seen as the frontrunner in the race, claimed there would be no new taxes or energy rationing if she became prime minister.

“I will also deliver immediate support to ensure people are not facing unaffordable fuel bills. I will be robust in my approach,” she said.

Sunak has sought to portray himself as the candidate with a more realistic assessment about the way to approach the economy, with tax cuts not expected immediately if he becomes leader.

He told the audience at the final hustings that “we shouldn’t rule anything out” on energy rationing, and has previously said it would not be “moral” to leave struggling households without extra support this winter.

Whoever becomes prime minister on Sept. 6 will have fewer than 1,000 days in office before they need to call a general election.

But they will face their first test at the ballot box even sooner. Local elections are due to take place in England and Northern Ireland in just over eight months’ time, on May 4, 2023.

There is a chance the new prime minister will not want to wait until the last possible date to call a general election, particularly as it would mean campaigning during Christmas 2024 and through much of January 2025.