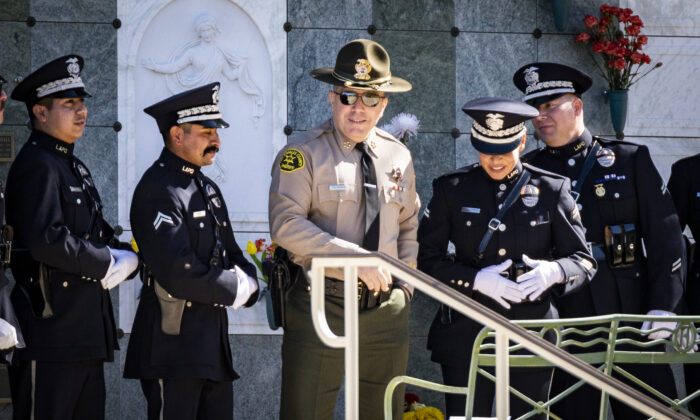 Voters to Decide If Los Angeles Supervisors Can Remove Sheriff

The Los Angeles Board of Supervisors voted Aug. 2 without discussion to pass a measure for the November ballot that will let voters decide if it can remove a publicly elected county sheriff from office.

The measure passed in a 4–1 vote, with Supervisor Kathryn Barger dissenting.

“Giving the Board of Supervisors the authority to remove an elected Sheriff unequivocally takes away power from the public,” Barger said in a statement. “It’s a move that has the potential to disenfranchise voters.”

She added the measure overlooks the recall process for elected officials who fail to uphold their duties.

If passed in the general election, it would allow the board to remove a county sheriff “for cause” by a four-fifths vote.

The “cause” is defined in the measure as a “violation of law related to a Sheriff’s duties, flagrant or repeated neglect of duties, misappropriation of funds, willful falsification of documents, or obstructing an investigation.”

The measure comes as the board has clashed several times with Sheriff Alex Villanueva over his law enforcement tactics and not requiring his deputies to be vaccinated against COVID-19.

The board also imposed a hiring freeze in February on his department while voting to terminate unvaccinated county employees, including sheriff’s deputies.

Villanueva refused to attend the county’s Civilian Oversight Committee meetings over lawsuits alleging deputy gangs and excessive use of force under his leadership and accused the board of threatening public safety by defunding his department.

In a letter to the board last month, Villanueva said the motion is an effort to sabotage his election campaign and “a recipe for public corruption, particularly when ‘cause’ remains so broad and undefined.”

The motion was modeled after San Bernardino County’s 2002 ordinance that gave its Board of Supervisors the power to remove not only its sheriff but all other elected officials in the county government for cause by a four-fifths vote.

At a previous board meeting, supervisors who supported the motion said it is not targeting Villanueva in a political attempt but is a way to hold a county sheriff accountable for his or her actions.

“The voters deserve an opportunity to decide whether this is the right way to enhance the accountability of the Sheriff and protect the lives and liberties of County residents,” Board of Supervisors Chair Holly Mitchell said in a July 12 statement.

Villanueva will go head-to-head with former Long Beach police Chief Robert Luna, who has been endorsed by all county supervisors, in the General Election.