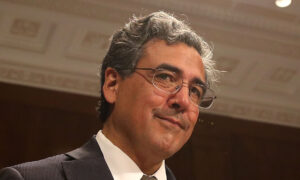 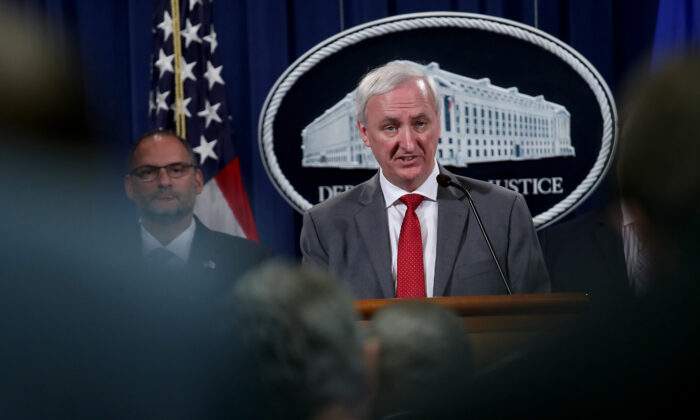 Deputy Attorney General Jeffrey Rosen is urging the public to pay attention to efforts by foreign powers to influence the upcoming election, adding that the growth of technology and the internet has posed new challenges in recent years.

Rosen on Wednesday underscored the importance of voters being aware of malign foreign influence in order to be able to make informed decisions when voting in the upcoming presidential election.

In a talk with the Center for Strategic and International Studies, the deputy attorney general said that foreign influence in elections is not new, and has been a concern since the founding of the Republic. Foreign powers have used different tactics over the years to try to stir up U.S. partisanship and influence public opinion, Rosen said. The tactics are usually described as being “coercive, covert, and corrupt.”

Tactics went from being coercive to more deceptive and covert in the 20th century, with foreign governments actively concealing their roles in their efforts, Rosen said. But he said in recent years, the United States is facing unprecedented challenges due to the advent of the internet and more recently social media.

“Today, the media environment is considerably different and the internet and social media allow foreign actors to reach unprecedented numbers of Americans covertly, inexpensively, and directly, without necessarily having to go through the traditional media [and] without even having necessarily to set foot on U.S. soil,” he said.

For example, during the 2016 election cycle, Rosen said, the Russian Internet Research Agency spent a total of about $100,000 over two years on advertisements on Facebook to “promote social discord and division and similarly placed disguise posts and tweets and several social media platforms.”

He said that these tools have allowed foreign powers such as Russia and China to become “more sophisticated and more bold” in their efforts. He said that back in 1986, the FBI told Congress that the Soviet Union measures to influence the election such as using forged government documents had relatively little success. But in recent years, foreign governments try to impersonate Americans on social media platforms, or manipulate digital content through deep fakes, which are more difficult to detect and counter, he said.

Rosen also added that the Chinese Communist Party (CCP) has also developed highly sophisticated foreign influence campaigns in recent years by using bribery, blackmail, and other malign tactics to influence year-round policymaking as well as have an impact on U.S. elections.

“The PRC tactics are more subtle, more pernicious, more complex. Beijing, for example, works relentlessly to co-op seemingly independent middlemen who can influence members of Congress and a host of policies,” he said.

The Office of the Director of National Intelligence (ODNI) has repeatedly warned about malign foreign influence in the past several months. Most recently, William Evanina, ODNI’s director of the National Counterintelligence and Security Center, said that his department was the most concerned about ongoing and potential activity by China, Russia, and Iran.

Evanina said the CCP been expanding its influence efforts ahead of November in order to “shape the policy environment in the United States, pressure political figures it views as opposed to China’s interests, and deflect and counter-criticism of China,” as it prefers President Donald Trump does not become re-elected.

He said the CCP’s public rhetoric had become increasingly critical of Trump administration in the past few months, in particular targeting issues such as the U.S. response to the CCP virus response and the closure of China’s Houston Consulate.

Similarly, Iran seeks to undermine U.S. institutions, Trump, and further divide the country prior to November, Evanina said. He said Iran is likely to focus its efforts on spreading disinformation on social media or recirculating anti-U.S. content.

Meanwhile, the ODNI assessed that Russia is using tactics to denigrate Democratic presidential nominee Joe Biden, who they see as an anti-Russia “establishment.” Evanina added that some Kremlin-linked actors are also seeking to boost Trump’s candidacy on social media and Russian television.

Rosen said that the DOJ has been taking steps to address these challenges such as assisting social media companies, campaigns, and election officials to harden and improve their platforms, networks, and infrastructure against these threats. He also said the FBI has also set up a task force aimed at investigating and working to counter such influence.

He also said the DOJ has also ramped up its efforts to ensure foreign actors comply with the Foreign Agents Registration Act, a federal law that requires all persons working on behalf of a foreign government or entity to register with the DOJ and disclose any activities performed “for or in the interests of” a foreign power. He also said the department has also been cracking down on actors of malign influence operations who violate federal law such as when they hack email systems to make them public.

The Trump administration has also used broader efforts to counter foreign influence by, for example, imposing financial sanctions on regimes that seek to engage in malign operations, Rosen said.

This past year, Trump administration officials have been urging or educating the public to be aware of efforts to influence the election. In February, several top officials including Attorney General William Barr and FBI Director Christopher Wray wrote an op-ed warning about the issue.

“Combating these threats requires a whole-of-society approach that deserves the attention of all Americans. While these threats to our elections are perennial, our efforts to defend our democracy are unwavering. As leaders of our government, we are committed to defending our democracy, but we need your help, too,” they wrote.

Earlier this month, the Department of State offered a $10 million reward for anyone who identifies or locates hackers who may be working for a foreign power to influence the U.S. election.