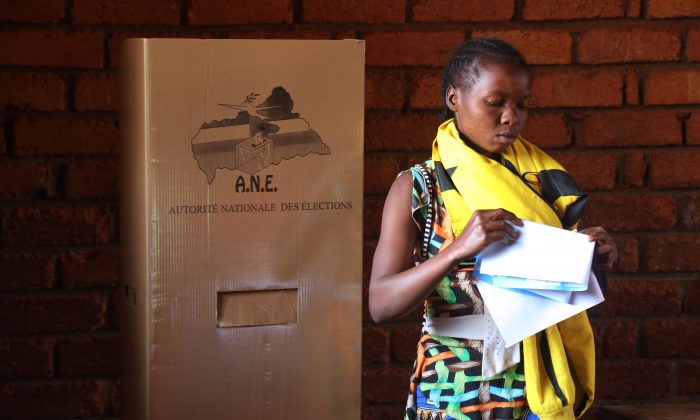 Voters are choosing a president from a list of 30 candidates to replace transitional leader Catherine Samba-Panza, who was put in place in January 2014. More than 1.8 million people were registered to vote at more than 500 polling stations nationwide.

Central African Republic has been rocked by unrest since March 2013 when a largely Muslim alliance of rebel groups known as Seleka overthrew President Francois Bozize. The rebel leader left power in 2014 and a horrific backlash by the Christian anti-Balaka militia against Muslim civilians followed. Thousands were killed and sectarian violence has continued, displacing nearly 1 million people.

That elections are being held at all is a major feat for the nation that has delayed them several times this year, including a delay from Dec. 27 to Dec. 30 to make sure training was finalized and voting better organized.

Voters stood patiently in line, some wearing colorful clothing, some hoisting parasols to ward off the hot sun.

It was not immediately clear how many people had come out to vote, but National Electoral Authority spokesman Julius Rufin Ngoadebaba said voting lines were moving until the final hours.

“This shows there has been enthusiasm for this vote. Central Africans have come out en masse,” he said.

Still, there were a few problems, with some names of candidates for parliament reported missing from ballots. But, at least through mid-day, there were no reports of violence.

Samba-Panza voted at a school in the capital, Bangui, urging others to get to the polls.

“Many thought this day, this vote would not be possible for security and organizational reasons. But, you see, we all are voting in dignity and peace and I am proud,” she said.

I expect these elections to be a new start of our country.
— Martin Ziguele, former prime minister

“I expect these elections to be a new start of our country,” said candidate Ziguele of the Movement for the Liberation of the Central African People. “This is one day, the day of choice. Whatever the shortcomings noted here and there, Central Africans must remain in the rank and vote until the end.”

People of Central African Republic are also voting for a National Assembly. Worries about the vote materialized for Christian Guenebeme, who said he was a legislative candidate but couldn’t find his name on the ballots.

“We were right to say that the conditions were not yet ripe for organizing these elections,” he said.

Marcellin Daza, 42, said there was disorder, but he wants change.

“We are discouraged, but we cannot give up the vote out of love for our country. It’s time for things to change,” Daza said.

“We saw with great happiness that the elections proceeded without problems,” he said.

Refugees also gathered in Cameroon’s border town Garoua Boulai Wednesday, where 12,000 have registered to vote, hoping for peace to return so they can go back home to Central African Republic.

“We have suffered too much and need peace to return to our homes,” said 23-year-old Abdoulaye Babiya who wants to return to being a student.

He and the thousands of others waiting on a dirt road in the heat of the sun proudly placed their votes in a clear plastic box with a red top, closely overseen by poll workers in bright yellow vests.

U.N. peacekeepers, police, armed forces and gendarmerie have been deployed. Five people died in violence in a vote on a referendum on Dec. 13 that was seen as a test for these national elections.

“France is confident that Central Africans will get to the end of the process,” he said, praising the transitional government.