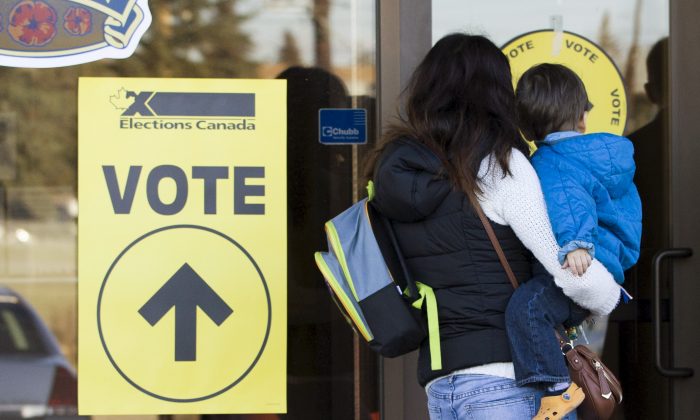 A woman holding a baby enters a polling station to vote in Calgary on Oct. 19, 2015. (REUTERS/Mark Blinch)
Canada

Voter Turnout for Monday’s Election Highest in Over a Decade

Voter turnout in Monday’s election reached levels not seen in more than a decade, with turnout hitting 68.5 percent—the highest since 1993, when it was 69.6 percent.

There may be a number of reasons for the high turnout, but the closeness of the race was “the number one major factor,” says Duff Conacher, a University of Ottawa political scientist and co-founder of Democracy Education Network.

“If you have a competitive race with two or three candidates that are strong that have different stances on important issues, you will see voter turnout up,” says Conacher.

“All the research shows that non-voters or first-time voters are more likely to vote if someone goes with them to vote. If that person is a friend, then it is the most important person a non-voter can hear from,” says Conacher.

The Ottawa area saw the highest levels of voter turnout, with Ottawa Centre topping the list at 82.22 percent, followed by Orleans at 80.91 and Carleton at 80.55 percent. Prince Edward Island reported the highest level of voting by province at 77.42 percent, while turnout for New Brunswick and Nova Scotia was also high—74.63 percent and 71 percent respectively.

According to First Nations groups, voter turnout for aboriginal people this time around hit all-time records.

Social media played a significant role throughout the campaign, being used by all parties to connect with supporters and voters.

“It had a much bigger role in this campaign than in other ones,” says Andrea Perrella, director of the Laurier Institute for the Study of Public Opinion and Policy at Wilfred Laurier University.

If you have a competitive race with two or three candidates that are strong that have different stances on important issues, you will see voter turnout up.
— Duff Conacher, Democracy Education Network

However, she notes, “the jury is out on the impact this had on turnout. … It is going to require some more analysis.”

“I don’t think social media causes anything to happen. It is an accelerant,” adds Perella.

“There was a clearly an ‘anybody but Harper’ movement. It was the same back in 2011, but it wasn’t as strong. It was much stronger this time around. Social media gave that movement a means to communicate more affordably.”

Andrea Lawlor, a political scientist at King’s University College at the University of Western Ontario who tracked social media interactions throughout the election, says Twitter allowed for an interactive campaign for a segment of the population.

“The parties relied on Twitter specifically for a few different things, not only reinforcing the message or platform, but to reinforce their base,” she says.

While social media can’t be cited as the sole reason for the increase in voter turnout, it might have contributed, Lawlor adds, noting that some candidates in past campaigns have used it to reinforce support at the polls.

“I have heard locally from some candidates that they have used social media in the past as a dynamic form of communication. ‘You need a ride? Great we can coordinate a driver,'” she says.

“Twitter becomes a powerful tool to get out the vote. Social media played a role to motivate people to vote and trying to mobilize individuals who otherwise may have stayed at home.”