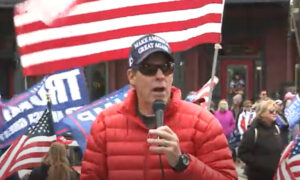 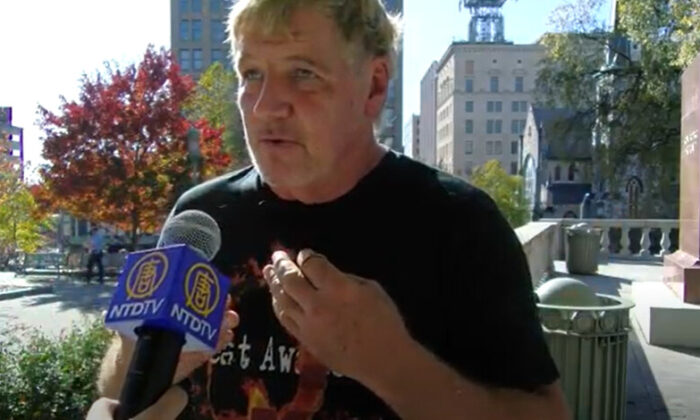 Voter Says Trump Should Litigate Until We Find the Truth

HARRISBURG, Pa.—Phil Parlock from West Virginia joined demonstrations in Pennsylvania because he doesn’t want the election to be stolen.

“I’m here to support the good cause. Half of America voted for the president.
We are honest, sincere, heartfelt middle Americans, we’re not out to hurt, lie, cheat, steal, or say something wrong,” Parlock said on Nov. 7, 2020, at a Stop the Steal rally in Harrisburg, Pennsylvania. “This is how we feel, we support our president. Does he say he’s tough? Yeah. Is he wrong sometimes? Yeah.”

“I support President Trump specifically because he has the heart of the nation in mind, he is good intentioned. Sometimes silly, sometimes wrong, but he has the heart of the nation and the good of the nation in mind, that’s what he wants to do,” said Parlock, who supported Senator Bernie Sanders in the past as well, because he believes the candidate truly loves the country.  Parlock says he has five children who served or are serving in the armed forces, and they are simple people who love their country.

“I’m here to support our president, to litigate however much he can to find the truth, not to win. If he fights and everything is proven that he’s wrong then guess what he lost. But there’s 2024, Pence or the President can run again, that’s all I can say,” he added with a laugh.

“We just want the truth, the truth,” Parlock said. He said all legitimate votes need to be counted, and bad votes tossed out. That means if there are fraudulent votes for Trump, those need to be tossed as well and he believes the president would honor that. “If he didn’t, we wouldn’t vote for him, it’s that simple.”

Parlock doesn’t think the elections have been above board. Beyond news reports of bad ballots, he’s seen social media censor the president’s posts, and friends have told him about their own ballot mishaps. He said one friend in North Carolina received 9 ballots by mail, including those meant for people long deceased. Another friend voted by mail and said when he called to check on the ballot it wasn’t received.

“They are finding real problems with the voting,” Parlock said.