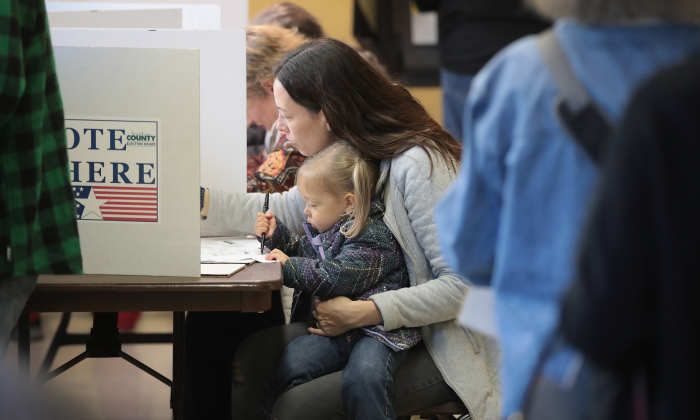 The study also found that such laws have “no negative effect” on voter registration or voter turnout either overall or for any specific group, whether defined by race, gender, age, or party affiliation.

The findings contradict a major assertion made by many election-oriented groups and Democratic politicians who believe that voter ID laws are a source of voter suppression. Voter ID laws and other contentious election integrity measures usually occur in states with Republican-controlled legislatures, making it a partisan issue.

“These results hold through a large number of specifications and cannot be attributed to mobilization against the laws, measured by campaign contributions and self-reported political engagement,” the authors said.

However, the study also found that voter ID requirements have no effect on voter fraud, leading the study’s authors to conclude that “efforts to reform voter ID laws may not have much impact on elections.”

A spokesman for the Public Interest Legal Foundation (PILF), a conservative election integrity organization, said the robust voting study is just the latest research to confirm that voter ID does not harm the voting public, though he questioned the findings about voter fraud.

“Voter ID is often the last line of defense against voter fraud at the polls,” said PILF spokesman Logan Churchwell in a phone interview, indicating that other forms of fraud, such as absentee-ballot fraud, are easier to commit.

“Plus, you never know how many decide not to commit fraud because of voter ID. You can’t quantify a negative,” he said.

Not all voter ID laws are the same. While 35 states have laws requesting or requiring voters to show some form of identification at the polls, only seven states have “strict photo ID,” the most stringent form of the laws.

According to the National Conference of State Legislatures, strict photo ID requires voters to provide an acceptable form of photo identification at the polls in order to vote, such as a state-issued driver’s license or ID card.

Failure to do so doesn’t mean an otherwise eligible voter will be permanently denied. Rather, voters without identification are required to cast a provisional ballot and sometimes return to an elections office within several days after Election Day with proper ID.

A Rasmussen poll published Oct. 3, one month prior to the November midterm elections, found that 67 percent of likely U.S. voters thought their fellow voters should be required to show photo identification before being allowed to vote.

A Gallup poll conducted prior to the 2016 presidential election found that four-in-five Americans, or 80 percent, supported voter ID laws. The results included 95 percent of Republicans and 63 percent of Democrats.

In the presidential election year of 2012, a Washington Post poll showed essentially the same result with almost 75 percent approval, including large majorities of people with less than $50,000 in annual income and two-thirds of “non-whites.”

Typically, lower-income voters and people of color are said to bear the brunt of voter ID laws, although consistent polling and the newly released National Bureau of Economic Research study appears to disprove such claims.

Stacey Abrams, a rising star in the Democratic Party, has staked her career on voting rights, or alternatively, voter suppression.

Less than a month prior to her narrow election loss in November to Georgia Gov. Brian Kemp, Abrams declared Georgia’s strict photo ID law was meant to “scare people out of voting.”

According to public records, Abrams raised $12.5 million from 2013 to 2016 through two voting-rights nonprofits she founded.

To date, Abrams has refused to acknowledge where the donations come from, although she has personally benefited to the tune of nearly half a million dollars.

Priorities USA, a large Democratic group based in Washington, was a major donor to Abrams’ nonprofits, as previously reported.

The group announced Feb. 7 that it will spend $30 million in the 2020 election cycle to “expand voter rights” and “fight Republican-backed laws in court that restrict ballot access,” according to the Associated Press.