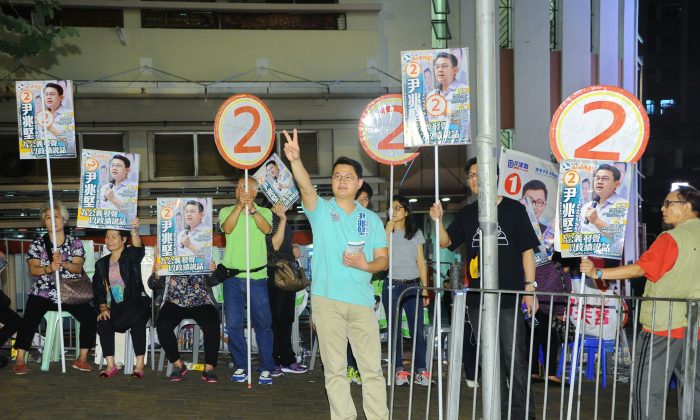 Wu added that he was told not to worry about resources. “It’s obvious that they want to find someone to snatch votes,” he stated.

He believes this is not the only case, and the pro-Beijing camp may have persuaded many people to snatch votes from pan-democrats.

The election, which took place last month, was considered a skirmish for the 2016 Legislative Council (LegCo) election. Of the 70 LegCo seats, 6 will be taken by District Councilors.

Among the 6 seats, 5 are known as the “Super Seats” or the District Council (Second), which is a functional constituency in the elections for the LegCo. They will be selected by 3 million eligible voters.

The result directly affects whether pan-democrats can secure 24 LegCo seats, which make up one third of the LegCo and hold the significant power of veto.

According to current affairs commentator Lau Yui-siu, the defeated pan-democrats would have won if the votes of the non-major competitors were added to them. Lau said certain forces have planned to defeat the pan-democrats and deprive them of the opportunity to compete in next year’s Super Seats election.

He said the Super Seats election is voted on by eligible voters territory-wide. He concluded that the pro-Beijing camp uses four methods of vote-rigging: vote planting, snatching votes, scattering votes, and vote allocation.

The methods they use are difficult to trace and redress by legal means, Lau said.

“Vote planting” is implanting voters in certain districts in order to increase the chances of winning.

Lau explained that a few years ago, the pro-Beijing camp had already started mobilizing people to register as eligible voters, especially elderly people.

“Some voters’ addresses have been changed for no reason,” Lau said.

According to the 2015 provisional register of electors, the number of registered elderly voters aged 66 to 70 has increased 18 percent from last year and 50 percent compared to 2011.

“Snatching votes” means having candidates pretend to be pro-democracy so they can snatch votes from pan-democrats.

These people do not have a constant community to serve and do not choose to compete in the area where the pro-Beijing candidates are elected unopposed. Lau said such a phenomenon has happened in many major districts.

A typical example is pan-democrat Frederick Fung Kin-kee from Lai Kok constituency in Sham Shui Po. His main competitor was Chan Wing-yan of the Democratic Alliance for the Betterment and Progress of Hong Kong (DAB).

Then his former fellow Chinese member Wong Chung-ki announced his election at the last minute. Wong won only 215 votes, but he successfully snatched votes from Fung, so Fung lost by 99 votes.

In Lok Tsui constituency in Tuen Mun, where pan-democrat Albert Ho Chun-yan has been serving for 16 years, Ho lost an election because there were five candidates to scatter his votes.

Lau also questioned whether this vote allocation is related to the after-vote surveys outside polling centers.

On polling day, two alleged pro-Beijing organizations were also conducting exit polls in the Shek Yam constituency of Kwai Tsing. However, their main function was not vote allocation, but mobilizing resources.

Pan-democrat Andrew Wan Siu-kin, who ran in Shek Yam, said that on the afternoon of election day, when his pro-Beijing competitor made a serious announcement about the situation, an election team of 200 to 300 people appeared. Some were locals, and some were mainland Chinese. Even an official from the Liaison Office came to see the situation of the election.

Wan estimated that there are over 4,000 registered voters in the district. If each voter received 4 calls on average, the resources taken to dial up to 16,000 calls would be significant.

Wan has won 2,853 votes, similar to previous elections. But the votes of his competitor Li Sai-lung of the DAB increased by over 1,000.

The number of registered voters in the district also increased by 1,268 compared to last year. Wan said this is not normal.

Wan said all the vote-rigging methods used by the pro-Beijing camp during the election are difficult to redress by legal means.

He has filed a complaint about the address issue of registered voters. The addresses of 24 of the total 33 complaints were problematic, and 16 cases were reported and investigated by the police.

However, because he filed the complaint, Wan was discredited by the pro-Beijing camp, resulting in the loss of roughly 300 votes.

According to Lau, especially in the 2016 LegCo election, most voters loathe vote rigging. The more disgraceful acts the pro-Beijing camp commits, the more voters will dislike them, he said.