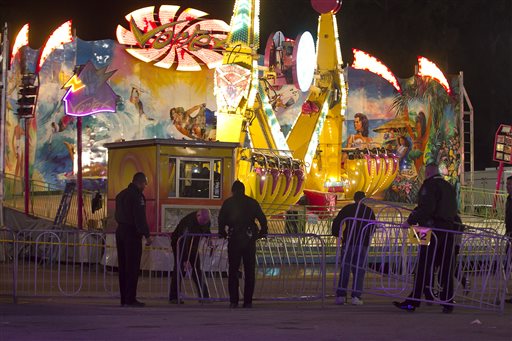 Fairgrounds Police secure a barricade around the Vortex after an accident closed the ride just after 9 p.m. on Thursday Oct. 24, 2013 at the N.C. State Fair in Raleigh, N.C. The accident occurred on the ride at the North Carolina State Fair on Thursday night, sending five people to the hospital with unknown injuries. (AP Photo/The News & Observer, Robert Willett)
US

At least five people fell out of the Vortex ride at the North Carolina State Fair on Thursday.

“Everybody was getting off and there was some people still trying to get off and somehow the ride started back up and 4-5 people couldn’t get off, and one of the workers told them to sit down and hold on in the middle of the ride and one person jumped out before it got too high and was ok ,and then when it went to flip everybody that was still on it went flying down.”

“And then they bounced off of the ride floor and looked like they turned into spaghetti and then was just laying there not moving,” Averett added.

“Can’t believe what I just saw… I legit feel sick to my stomach. Praying for the people who fell off the vortex,” said Tripp Atkinson, another witness, via Twitter.

Five people were taken to the hospital, two of them unconscious. Those two remain in critical condition, while the other three sustained less serious injuries.

A witness told Waller that he heard something out of the ordinary, “like a bunch of stuff hitting metal.”

A spokeswoman for WakeMed Health & Hospitals in Raleigh where the five people were taken told NBC that they’re being evaluated in the emergency room. The youngest victim is 14, while the oldest is 39, officials said.

Molly Grantham of WBTV said that a witness told her that the people “were not upside down when they fell out. They were just spinning around and then flew out.”

The ride’s operator fell to his knees and began crying when he saw what happened.

The ride is not the needle-looking Vortex, it’s the newer version.

The rides are supposed to be inspected three times daily, “and that is something that they’ll be looking at as part of the investigation,” said Dolores Quesenberry, communications director with the North Carolina Department of Labor.

“This all has happened so fast,” she said.

Among the possible causes for the accident that investigators will be reviewing is a safety switch that malfunctioned on the ride Monday, according to Tom Chambers, the chief of the ride inspection unit at the state Labor Department. The ride was temporarily idled as workers replaced the switch, Chambers said. It had reopened Monday night after being tested.

Powers Great American Midway is a carnival company that manages the rides. The owner, Les Powers, told The Associated Press on Friday he didn’t know what caused the accident.

“Nobody wants this to happen, and we’re trying to find out why this did happen. Until I find out any information, I can’t even give you a clue,” Powers said.

His contract calls for him to provide 93 rides to the fair. His company has 54 rides at the fair, and it contracted with other companies to provide the rest. The Vortex is owned by a Georgia-based carnival owner, not Powers, he said.

“Oh my God, we feel absolutely horrible for the families,” he said. “I’m not used to this. This doesn’t happen. I don’t know how to react. I tried to sleep last night, but I couldn’t. I just feel so horrible for them, about the whole thing. I wish I could turn the clock back. “

If anyone has a cellphone video, officials are asking for it, as part of the evidence collection. Officials are interviewing 35 to 40 witnesses.

The fair is open through Oct. 27, after opening on Oct. 17. The video below shows the ride in operation.