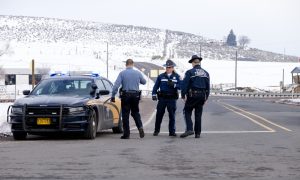 “Welcome to Portland,” it read along with a smiley face.

“We’re trying to avoid politics,” Voodoo Doughnut’s co-owner Kenneth Pogson told The Oregonian, “but this whole thing seemed like such a big deal—with them taking public property, armed to the teeth, making a stand that they thought everyone would join. It was a debacle that was on everyone’s mind, left or right.”

The iconic Portland shop shared the photo of the donut on Instagram.

“It’s just for display in the case and for the Internet,” Cheyenne Nichols, an assistant manager, added, saying it’s not for sale.

Bundy was arrested near Burns and taken to the Multnomah County Jail, according to KGW. In all, 11 protesters were arrested after taking over a federal wildlife refuge center earlier this month

Bundy has since encouraged remaining protesters at the refuge to go home.

“We know there are various versions of what occurred during this event: most inaccurate, some inflammatory. To that end, we want to do what we can to lay out an honest and unfiltered view of what happened and how it happened,” Greg Bretzing, the FBI’s special agent in charge in Oregon, told the network.

Voodoo Donut also created donuts for Alan Rickman and David Bowie, who both died this month.