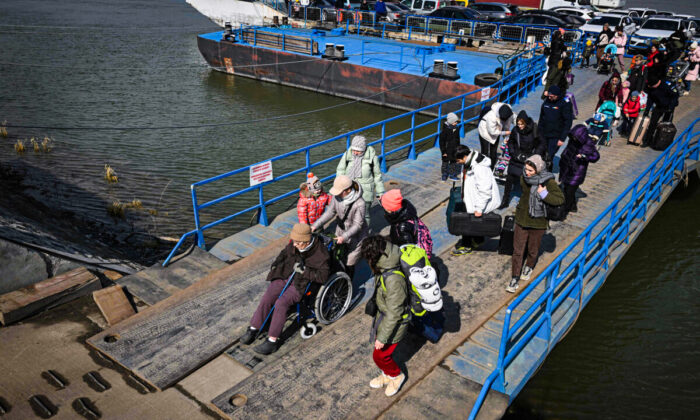 Refugees from Ukraine arrive by ferry at the Romanian–Ukrainian border point Isaccea-Orlovka in Isaccea, Romania, on March 8, 2022. - More than two million people have fled Ukraine since Russia launched its full-scale invasion less than two weeks ago, the United Nations said on March 8, 2022. (Photo by Daniel MIHAILESCU / AFP) (Photo by DANIEL MIHAILESCU/AFP via Getty Images)
Russia-Ukraine War

A steady stream of refugees from Ukraine heading into Romania are finding their way to American Jim Leach and his wife, Becky, who had been leading a team of full-time volunteers to aid Romanian orphans over the past five years.

At least, he said, that’s what they did until two weeks ago.

“Then the war started and people came streaming across the border,” Leach said via a live internet interview with The Epoch Times on March 10.

“We couldn’t say ‘no’ to people needing help. Now we are serving refugees day and night, nonstop, at our facilities in Cluj-Napoca.”

Cluj-Napoca is a city of about 700,000, about three hours south of the Ukrainian border.

“The refugees come, we feed them and give them a comfy bed to sleep on. Most stay for a few days, then move on to where they are going, and the beds fill up again immediately. There are never times we have empty beds. They just don’t stop coming.”

Jim said he and his wife are members of Youth With a Mission, an all-volunteer Christian agency, and were already working with the orphans out of an expansive property in Cluj-Napoca.

There are three large buildings on the grounds, run by a staff of 20 international volunteers.

When the war across the border didn’t end quickly, they were suddenly thrust into something new, with decisions to make.

“The dynamic of aiding refugees changes daily with every new family,” Leach said. “You have to be flexible because each situation is different, and we chose to do that.”

Choosing the quality of their outreach to refugees, instead of simply quantity, was a “must,” Leach said.

“The people coming are very sad and withdrawn,” he said.

“They are broken down, mentally, physically, and spiritually. Entire families come here because if there are three children, husbands are allowed to come out. I told our staff, ‘We’re not here just to feed them and give them a bed. We need to sit down and listen to them; befriend them; laugh or cry and pray with them.

“We can’t bypass that, so we do that with anyone and everyone who comes to us. It doesn’t matter if they are believers or not. We help them all.”

Donations have been flooding into the center at an unprecedented rate, Leach said.

“The giving hearts of people, internationally, to us has been overwhelming. And the Romanians have been more generous now than I have ever seen,” he said. “They opened their borders, letting people in without passports or proof of COVID vaccinations, which had been required.

“They’re giving free train transportation to refugees. I’m so proud of them for how they are responding.”

The donated food, medical, and baby supplies to the Leaches’ team are taken into Ukraine each week by van caravan, six hours to a maternity hospital. It’s a stressful experience, said Leach, who was in the first caravan.

“To get to the hospital, we go through eight Ukrainian military checkpoints. They ask a lot of pointed, aggressive questions at each one: ‘Are you Russians; are you armed?” and so on. It’s very intense.”’

“Our team is preparing logistically and mentally to be doing this for a year,” Leach said. “That way, we’ll be prepared for the long-term. We’ll be happily surprised if it’s only a short-term need.”

New construction already happening on the Youth With a Mission property will aid more incoming refugees.

Donations needed for his team include short-term volunteers, certain medical items, and finances.

“It’s so expensive to ship items to Romania and takes so long that money is the easiest way to donate.

“That way, we can buy specifically what refugees need when they need it, and move the supplies immediately.

To contribute to Youth With a Mission in their bid to help Ukrainian refugees, contact Jim Leach via email at Jim.leach76@gmail.com.