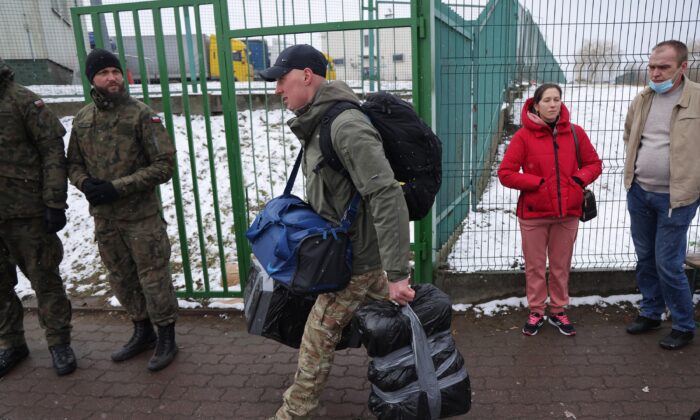 A man who said he wants to join the fight against the Russian army in Ukraine crosses into Ukraine at the Medyka border crossing, in Medyka, Poland, on March 9, 2022. (Sean Gallup/Getty Images)
Russia-Ukraine War

Volunteers From Other Countries Who Join Fight Against Russia Can Get Citizenship: Ukraine

Foreigners who travel to Ukraine to fight alongside Ukrainian forces during the war with Russia can receive Ukrainian citizenship, a top official said on March 9.

“If such foreign nationals are interested in obtaining Ukrainian citizenship, our legislation provides for them such an opportunity,” Yenin was quoted as saying.

Ukraine recently created an international bridge composed of people from other countries who join the fight against Russia, which invaded Ukraine in February.

Ukrainian President Volodymy Zelensky called shortly after the conflict began for foreigners to help Ukraine and Zelensky said in early March that some 16,000 had volunteered.

As of Wednesday, that number was up to 20,000, according to the Kyiv Independent.

Britons who volunteered said they did so because they felt it was the right thing to do.

Ukraine has also been bolstered by tens of thousands of men reportedly returning from abroad.

Russian Defense Ministry spokesman Igor Konashenkov warned Western volunteers that they would be considered combatants and officials from countries sending military assistance to Ukraine had mixed responses to Zelensky’s call.

“For those who want to help Ukraine and help its people, there are many ways to do that, including by supporting and helping the many NGOs that are working to provide humanitarian assistance; providing resources themselves to groups that are trying to help Ukraine by being advocates for Ukraine and for peaceful resolution to this crisis that was created by Russia,” U.S. Secretary of State Antony Blinken told a briefing on March 2.

“Absolutely, if that is what they want to do,” she said on BBC. However, British troops who leave to Ukraine face prosecution, the UK’s defense chief said.

A senior U.S. military official, meanwhile, told reporters on a call this week that reports Russia was recruiting Syrian fighters to help them against Ukraine were credible.

The United States thinks it’s “noteworthy” that Russian President Vladimir Putin “indicated a willingness to rely on foreign fighters to fight the war in Ukraine,” the official said, speaking on condition of anonymity.