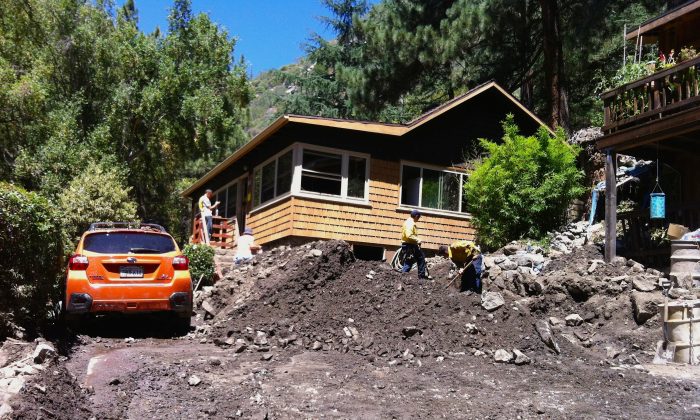 The floods resulted in one death after a fleeing hiker’s car was washed off the road in Mount Baldy, a mountainous community of about 1,200 northeast of L.A.. He was identified Monday as 48-year-old Joo Hwan Lee of El Segundo, Calif. One volunteer was reported injured while trying to rescue two hikers.

According to the San Bernardino Fire Department, Mt. Baldy got almost five inches of rain in just one hour on Sunday. A river of mud and rocks slid into houses on the north side of town, burying some up to their roofs. At least eight houses were badly damaged.

Some residents were still trying to dig out their houses two days later with a little help from their neighbors.

The volunteer Fire Department in Mt. Baldy and up to 60 volunteers from the Church of Jesus Christ of Latter Day Saints helped shovel dirt and rocks out of homes and off driveways on Tuesday. The floors of dozens of structures were still covered in muck.

“We have heavy equipment in the area from people that do live in the area, local operators that are volunteering their time to help their community clean out and rebuild,” said Captain Bret Raney of the San Bernardino Fire Department.

The Board of Supervisors, LA county’s governing body, unanimously declared a local state of emergency Tuesday for the Mt. Baldy area of Los Angeles County.