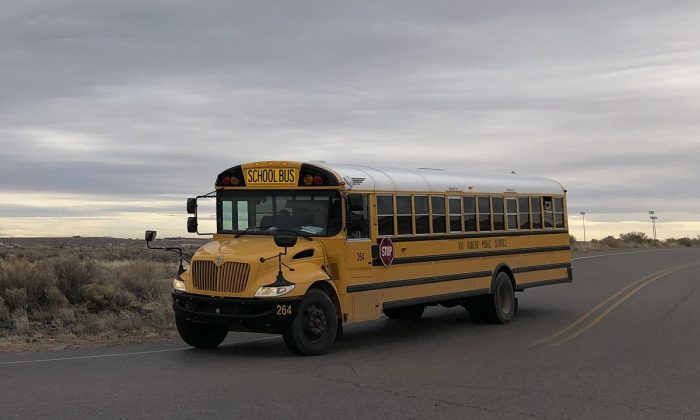 A school bus from a file photo. (Russell Contreras/AP)
US News

The bus was on its way back to Caroleen from Mitchell County after the Thomas Jefferson Classical Academy’s volleyball team played a match.

Among those injured were the bus driver, two trainers, and 11 players. One injured person had to be airlifted to Mission Hospital. The remaining injured people were transported to local hospitals.

“It’s truly a miracle something like this happening and this being the result. We are truly blessed,” Kehler said.

“We are writing to share some unfortunate news. Last evening, on their return trip from a match at Mitchell High School, our volleyball team was involved in a bus accident. A number of our players, two of our coaches, and our bus driver were injured in the accident, but we are grateful that no life-threatening injuries are being reported at this time.

“We will update our community as soon as we have more information.

“In the meantime, we ask that you keep these girls, their coaches, the bus driver, and their families in your thoughts and prayers.”

The  Mitchell High School Volleyball team also posted a comment to Twitter: “Our thoughts and prayers go out to the Thomas Jefferson Classical Academy Volleyball team, the students, faculty, and families for the bus accident that happened tonight on the way home from a match.”

Our thoughts and prayers go out to the Thomas Jefferson Classical Academy Volleyball team, the students, faculty, and families for the bus accident that happened tonight on the way home from a match. #tjstrong #volleyballisafamily 🏐❤️💛 pic.twitter.com/43AowTbZH0

The cause of the accident has yet to be determined.

On June 23, two members of a church group from Albuquerque died after their charter bus struck a bridge support and veered off into a ditch while driving on Colorado I-25, officials said.

Five adults and 10 children, associated with a Catholic church group called the Aquinas Newman Center in Albuquerque, were on their way home after having attended the Steubenville Youth Conference in Denver.

The accident happened on southbound I-25 about 10 miles north of Pueblo, at approximately 2:30 p.m.

At this time we have confirmed two fatalities related to this charter bus crash. Our condolences go out to the families of those involved in this crash. We will provide further information as we are able. pic.twitter.com/sijgTQyRON

One of the two killed was the 22-year-old bus driver, The Pueblo Chieftain reported.