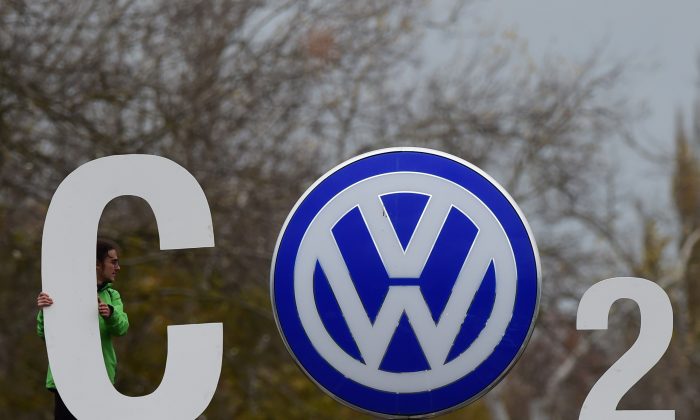 An activist of environmental organisation Greenpeace holds a giant letter to display "CO2" around the logo of German car maker Volkswagen ( VW ) at the entrance of the company's headquarters in Wolfsburg, on November 9, 2015. (John Macdougall/AFP/Getty Images)
Business & Markets

Volkswagen Weighs Finances as It Prepares to Present US Engines Fix

WOLFSBURG, Germany—Volkswagen’s board is discussing the automaker’s future financial strategy in the wake of its emissions-rigging scandal, and was due to present to U.S. authorities later Friday its plan to fix the affected diesel engines.

The 20-member board began meeting Friday morning behind closed doors to talk about how to best balance savings and investment in light of the massive costs it can expect to incur from the scandal.

Volkswagen in September admitted that almost 500,000 of its four-cylinder diesel cars in the U.S. had cheated on emissions tests thanks to a piece of software. A total of 11 million cars worldwide have the software, though it has not yet been confirmed that it helped cheat on emissions tests outside the U.S.

The carmaker has set aside 6.7 billion euros ($7.4 billion) to cover the costs of recalling the vehicles installed with the software but experts say the total expense, including fines and lost sales, could be several times higher.

Volkswagen has a Friday deadline to submit a draft plan to fix four-cylinder diesels to the U.S. Environmental Protection Agency and the California Air Resources Board, the two agencies that forced the German automaker to admit to the cheating. The company met with the agencies on Thursday, with a final submission on Friday.

Volkswagen Sales Dip in Europe, but No More Than Competitors

It will have two options to fix most of the cars. It can install a bigger exhaust system to trap harmful nitrogen oxide, or it can retrofit a chemical treatment process that cuts pollution.

The bigger exhaust will likely hurt performance and gas mileage, angering car owners. But the chemical treatment, while saving acceleration and mileage, needs a clumsy storage tank and multiple hardware changes to work. In either case, almost a half-million cars would have to be recalled for the repairs.

Volkswagen’s scandal has widened since the September revelations. The company also admitted finding irregularities in carbon dioxide emissions in 800,000 other vehicles, all outside the U.S. Some of those were powered by gasoline engines.

Carbon dioxide is a greenhouse gas blamed by scientists for global warming, and faces increasingly strict limits in Europe.