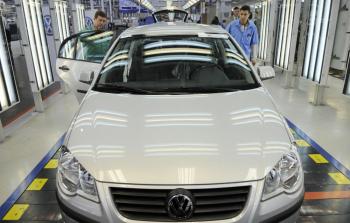 Volkswagen employees work on cars on the assembly line of the plant in Sao Paulo. (Michael Kappeler/AFP/Getty Images)
Business

By Ilya Rzhevskiy
Print
Volkswagen AG, Europe’s largest automaker, plans to invest 2.3 billion euros US$3.4) into its Brazilian subsidiary, Volkswagen do Brazil. With this investment, it plans to increase its Brazilian manufacturing capacity to one million vehicles per year by 2014.

VW’s Brazilian business is currently the largest car manufacturer in the country, producing at a rate of 800,000 vehicles per year in 2009. That amounts to a staggering 70 percent increase in production since 2005. In addition, Volkswagen enjoys the country’s biggest dealership network with around 600 dealers.

“We will enjoy significant growth in Brazil this year and win market share. Our target is to sell one million vehicles per year in Brazil by 2014, thus making an important contribution to the success of the Group’s Strategy 2018,” said Thomas Schmall, CEO of Volkswagen do Brazil, in a statement.

Brazil has 192 million inhabitants—of which statistically only 1 out of 7 adults own a vehicle—and is viewed as a fast growing emerging market for the auto industry. After Germany and China, Brazil is the third-largest market for VW.

In contrast, Germany has a very mature car market with 50 percent of all adults owning a car. In order for VW to gain market share in its homeland, it must compete with other traditional German brands such as Mercedes-Benz, BMW and Porsche—an almost impossible feat due to consumers’ brand loyalty. Additionally, brands like Mercedes, Porsche, and BMW signify a societal status that every German wants to achieve, while Volkswagen is mostly viewed as an economy vehicle.

Brazil is viewed as an attractive market for cars due to the fact that the auto industries in the United States and Europe have suffered greatly at the hands of the recent global recession—sales are down significantly and some automakers are on life-support.

In the United States, auto sales have rebounded modestly over the last two months, but some analysts believe that the surge may be short-lived as the sales rebound depended on government scrap programs.

“Brazil is one of our most important growth markets worldwide. We expect demand there to rise significantly over the coming years and we are now systematically adjusting our manufacturing capacity,” said VW CEO Martin Winterkorn in a statement.

In addition to expanding production in Brazil, VW plans to launch 26 product enhancements, including the new Fox, Passat CC, Tiguan and Eos.

Company officials are aiming to become the world’s largest automaker—a title currently held by Japan’s Toyota Motor Corp., with General Motors not far behind. VW has set 2018 as the year to reach that goal.