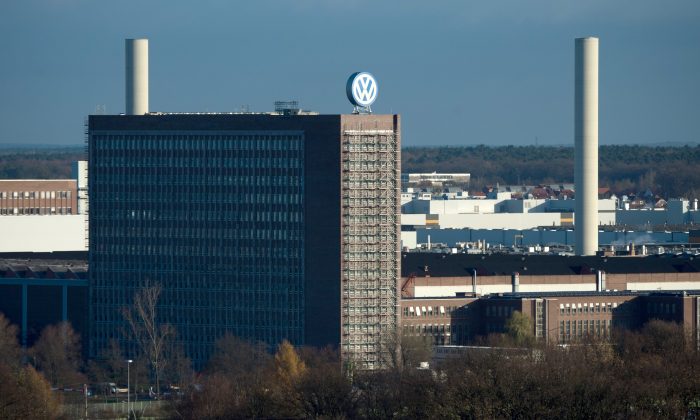 View of the Volkswagen factory in Wolfsburg, Germany, on Nov. 20, 2015. Volkswagen CEO Michael Mueller says the company's board has decided to reduce capital expenditures by $1.07 billion in 2016 as it deals with the fallout of its emissions-rigging scandal. Mueller said Friday after a meeting of the board at company headquarters in Wolfsburg, German, that the cuts would bring capital expenditure down to 12.8 billion next year. (Julian Stratenschulte/DPA via AP)
Business & Economy

WOLFSBURG, Germany—Volkswagen will cut its spending by 1 billion euros ($1.07 billion) next year and “strictly prioritize” investments as it shores up its finances to deal with its emissions-rigging scandal, CEO Matthias Mueller said Friday after a board meeting.

The carmaker, which is due to present to U.S. authorities later in the day its plan to fix diesel cars affected by the scandal, has decided to cancel or postpone investments that aren’t “absolutely necessary,” Mueller said. That will reduce overall capital expenditure to 12 billion euros in 2016.

“What we definitely won’t do is make cuts at the expense of our future,” said Mueller.

Among other things, he said Volkswagen would postpone the building of a new design center in Wolfsburg and the introduction of an all-electric Phaeton sedan, and review other projects.

“We’re driving cautiously over the coming months, but we know where we want to go and we want to ensure that the Volkswagen company comes out of the current situation strengthened,” he told reporters in a short statement, without taking questions, after the 20-member board met at company headquarters.

Volkswagen in September admitted that almost 500,000 of its four-cylinder diesel cars in the U.S. had cheated on emissions tests thanks to a piece of software. A total of 11 million cars worldwide have the software, though it has not yet been confirmed that it helped cheat on emissions tests outside the U.S.

The carmaker has set aside 6.7 billion euros ($7.4 billion) to cover the costs of recalling the vehicles installed with the software but experts say the total expense, including fines and lost sales, could be several times higher.

Volkswagen has a Friday deadline to submit a draft plan to fix four-cylinder diesels to the U.S. Environmental Protection Agency and the California Air Resources Board, the two agencies that forced the German automaker to admit to the cheating. The company met with the agencies on Thursday, with a final submission on Friday.

It will have two options to fix most of the cars. It can install a bigger exhaust system to trap harmful nitrogen oxide, or it can retrofit a chemical treatment process that cuts pollution.

The bigger exhaust will likely hurt performance and gas mileage, angering car owners. But the chemical treatment, while saving acceleration and mileage, needs a clumsy storage tank and multiple hardware changes to work. In either case, almost a half-million cars would have to be recalled for the repairs.

Volkswagen’s scandal has widened since the September revelations. The company also admitted finding irregularities in carbon dioxide emissions in 800,000 other vehicles, all outside the U.S. Some of those were powered by gasoline engines.

Carbon dioxide is a greenhouse gas blamed by scientists for global warming, and faces increasingly strict limits in Europe.