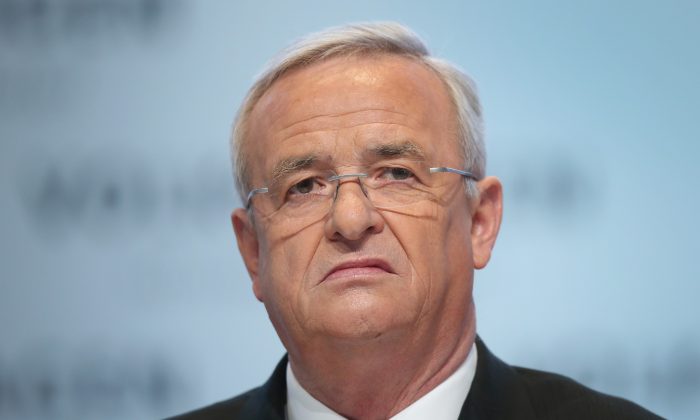 No replacement was announced, and VW still has no easy exit from a scandal that has suddenly dented a reputation for trustworthiness that took decades to build. The smog-test trickery has wiped out billions in VW’s market value and raised the specter of criminal investigations and billions more in fines.

Winterkorn took responsibility for the “irregularities” found by U.S. inspectors in VW’s diesel engines, but insisted he had personally done nothing wrong.

“I am doing this in the interests of the company even though I am not aware of any wrongdoing on my part,” his statement said. “Volkswagen needs a fresh start. … I am clearing the way for this fresh start with my resignation.”

Huber said a successor will be discussed at a board meeting on Friday that was originally intended to approve extending Winterkorn’s contract through 2018.

Nearly 25 billion euros (around $28 billion) was wiped out in the first two days of trading after the U.S. Environmental Protection Agency revealed that VW has been violating the Clean Air Act and could be subject to fines of as much as $18 billion.

I am clearing the way for this fresh start with my resignation.
— Martin Winterkorn, former CEO, Volkswagen Group

The EPA accused VW of installing the so-called defeat device in 482,000 cars sold in the United States. VW later acknowledged that similar software exists in 11 million diesel cars worldwide and was setting aside 6.5 billion euros to cover the costs of the scandal.

Huber said, “Mr. Winterkorn had no knowledge of the manipulation of emission values,” and praised the departing CEO’s “readiness to take responsibility in this difficult situation for Volkswagen.”

Stephan Weil, the governor of Lower Saxony state, which holds a 20 percent stake in Volkswagen, said VW is filing a criminal complaint, “because we have the impression that criminally relevant actions may have played a role here.”

Weil, also a VW director, promised to “clear up these events with all the possibilities we have inside the company and ensure that those involved are punished severely.”

The prosecutors’ office in Braunschweig, near VW’s Wolfsburg headquarters, confirmed that it is weighing an investigation of VW employees.

Other governments from Europe to South Korea have begun their own inquiries, and law firms have already filed class-action suits on behalf of customers.

There is no immediate way of restoring VW’s reputation, but only total transparency can resolve the scandal and salvage its brand, said Jeremy Robinson-Leon, chief operating officer at Group Gordon, a New York-based corporate and crisis PR firm.

“The most important thing is that VW comes out and tells the public what happened, who was involved and makes sure that it doesn’t happen again,” he said.

U.S. regulators raised questions about VW’s diesel emissions in March 2014, and insisted on answers for another 18 months before the company finally acknowledged installing the stealth software.

The company has yet to reveal what its digital records show about who developed, wrote, and tested the code, under whose direction, and why.

German authorities also insisted on answers Wednesday as they sought to limit the impact on Europe’s largest economy.

Economy Minister Sigmar Gabriel said it’s important the scandal is cleared up quickly and “the consequences are drawn.” But he cautioned against casting doubt on the quality of Volkswagen as a whole or the rest of the country’s auto industry.

“The damage that some people have unleashed for the company and its employees is huge—but I think we should take care not to make a general debate about the quality of Volkswagen or the whole German auto industry out of this,” Gabriel said at the Frankfurt auto show.

“‘Made in Germany’ stands for excellent products,” insisted Ulrich Grillo of the Federation of German Industries.

Still, economists are raising concerns about an impact on German growth.

Carsten Brzeski, chief economist at ING Germany, said the ongoing refugee crisis and now the “Volkswagen shocker” pose new risks. While the impact remains unclear, VW is “one of Germany’s most important global champions” and an “important growth driver for the German economy.”

Another unanswered question is whether Volkswagen was alone in trying to dupe emissions testers. Wah okorries about wider malpractices have depressed the share prices of many other European automakers, though not on VW’s scale.

Some of those stocks recovered slightly from early session losses Wednesday. BMW’s closed up 0.6 percent, while Daimler’s was up 0.3 percent. French carmakers Peugeot Citroën and Renault fared worse though, down 2.6 percent and 2.3 percent respectively.

“Dealers despise being kept in the dark, and the carmakers as a whole will be a sector to swerve until there is a conclusion to this saga,” said David Madden, a market analyst at IG.

Germany’s biggest bank, Deutsche Bank, has already lowered its forecast for the main German stock market index, the DAX, where carmakers account for 25 percent of its total value. It warned clients to expect “a potentially more sustained loss in brand value and prolonged recovery period ahead in the U.S.”