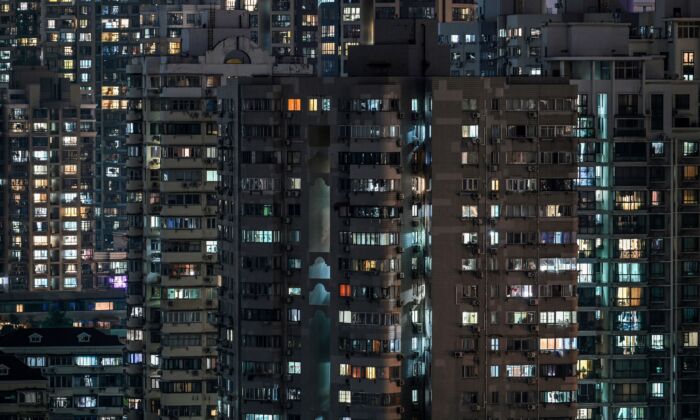 View of residential units during a Covid-19 lockdown in the Jing'an district of Shanghai on April 21, 2022.(Hector Retamal/AFP via Getty Images)
CCP Virus

A protest erupted on China’s tightly-controlled internet on April 22 as social media users battled against censors for hours to circulate a video documenting the voices of residents recorded during Shanghai’s ongoing lockdown.

The six-minute video, titled “The Voice of April,” was blocked shortly after it appeared on the instant messaging app WeChat and microblogging platform Weibo. With high efficiency, direct references to the footage were restricted on the two popular social media platforms.

But Chinese people were finding creative ways to re-post the video, for example, changing the name, or embedding QR codes in seemingly unrelated photos to direct others to download it from cloud storage services.

Again, these copies were quickly made unaccessible. Hashtags with more vague references, like “April” and “Shanghai Silence,” were scrubbed on Weibo as rebellious netizens continued to find ways to outmaneuver censors, and spread the plight of Shanghai residents under the strict lockdown.

The popular video opened with audio clips of Shanghai officials’ remarks at two daily briefings in March when they denied they planned to lock down the whole city.

“We can’t [lock the city down],” said an official. “Because Shanghai is not only home to Shanghai residents. Our city plays an important role in the national economic and social development.”

Just one day later, Shanghai abruptly changed the course and announced a two-staged lockdown plan starting on March 28. What was initially promised to be an eight-day lockdown has extended to five weeks and counting.

The black-and-white video shows an aerial view of the megacity’s silent skyscrapers and empty streets, as over 20 audio clips of residents describing their situations play in chronological order.

You hear babies crying as they are forcibly taken away from their parents, a truck driver voluntarily delivering supplies saying he was stuck in the city with no food or water, a son saying his seriously ill father was denied hospital care, residents in locked-down communities screaming demands for supplies, and a woman describing the unfinished quarantine facility she was sent to.

“In a month of Shanghai’s outbreak, [I] saw many speaking out online, with most of them disappearing shortly after,” the maker of the video said in a WeChat post on Friday. “But some things should not have happened and should not be forgotten.”

In one of the few warm moments documented in the video, an aged man sends food to workers stranded in his same building.

“This virus can’t kill us, but starvation can,” he says.

“Get better soon, Shanghai,” reads the ending of the video.

Most of the stories in the video were circulated on social media. Many residents, sealed in their rooms, have taken to Weibo to plead for help and express their frustrations.

While this is not the first video documenting life under lockdown to be erased by China’s censors, this outpouring of public emotion hasn’t been seen since the death of Chinese whistleblower Li Wenliang. The doctor, who warned of a new form of pneumonia on social media, was reprimanded by police for “rumor-mongering” in late 2019, and later died of the virus himself.

Shanghai is approaching its fifth week of lockdown, with no sign of ending in sight.

The heavy-handed curb measures, however, have so far failed to contain the city’s outbreak driven by the fast-moving Omicron variant. Shanghai recorded some 21,000 new cases over the past 24 hours on April 24, though the official data has increasingly come into question by residents and experts, given the Chinese regime’s history of downplaying and covering up information about the COVID-19 outbreaks across the country.

On April 24, the authorities stepped up control measures by erecting metal barriers around compounds to restrict people’s movements. Many of the two-meter high fences have been installed around residential compounds where at least one person has tested positive for COVID-19.