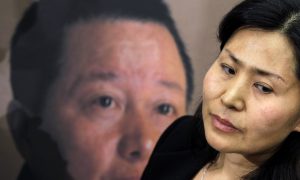 Beijing prosecutors said in a statement that Pu Zhiqiang should be criminally prosecuted for his online comments that incited ethnic hostility and those that insulted people in a disruption of social order. If convicted, Pu could be jailed up to 10 years on each charge.

The prosecution has come amid Beijing’s widening crackdown on civil society, including rights lawyers who have steadfastly maintained that laws must be observed by the government and the ruling Communist Party as well as ordinary people.

The indictment drew criticism from international human rights advocates, who have insisted on Pu’s innocence.

“The charges against Pu Zhiqiang are another act of political persecution,” said William Nee, China researcher at Amnesty International. “He did nothing more than comment on current affairs on social media.”

Pu is best known for his successful efforts to abolish China’s labor camps, which allowed police to lock up people for up to four years without a trial or judicial review. A Chinese news magazine featured him on its cover in 2013 and portrayed him as a societal pillar persistent and gutsy in pushing for progress in China’s judiciary system.

Before his May 2014 detention, Pu was trying to call attention to the long-standing but extrajudicial practice by the Communist Party’s disciplinary arm to lock up its members accused of wrongdoing.

In a public call for Pu’s release, U.S. State Department spokesman Jeff Rathke described Pu as “a courageous defense attorney recognized around the world for his tireless work in support of the rule of law in China.”

But Pu apparently became a primary target in Beijing’s campaign to weaken and discredit the country’s rights lawyers.

Before he was detained, 12 of Pu’s microblogging accounts were shut down by authorities. One lasted only 16 days.

The charges against him are largely based on comments from his closed accounts, in which Pu questioned China’s ethnic policies and practices and criticized the party and political figures.

“From top to bottom, this party cannot survive a day without telling lies,” Pu wrote in a July 2012 post.

“There is no one without whom China cannot live,” Pu wrote in July 2013, refuting the common propaganda line that China cannot survive without the party. He said in the same posting that the party maintains its rule through deception and violence.

Pu also criticized some political figures or made sarcastic remarks about them. For example, Pu poked fun at an octogenarian delegate who has never voted “No” during six decades in the national congress, suggesting she would be honored if she should die now.

Following deadly attacks on civilians by members of the ethnic minority Uyghurs from China’s far west region of Xinjiang, Pu condemned the violence but questioned Beijing’s ethnic policies and practices.

“If Xinjiang is indeed part of China, don’t treat it as a colony, don’t behave like conquerors and looters,” Pu wrote in May 2014. “It’s time to adjust Xinjiang policies.”

The ethnic violence has left hundreds of people dead in China in the last couple of years. Although Beijing blames it on religion-influenced terrorists with foreign ties, Pu is among people who have asked for a review of China’s ethnic policy and practice.

Beijing police also had sought a more severe charge of inciting divisions and another charge of illegally obtaining personal information against Pu, but they were not included in the indictment.

Mo Shaoping, a Beijing-based lawyer who is representing Pu, said he had expected reduced charges but that the two charges in the formal indictment still have no merit.

“I don’t think the remaining two charges have any basis,” Mo said.

Pu was taken away last May after he attended a private meeting commemorating the 25th anniversary of a bloody crackdown on pro-democracy demonstrators in Beijing’s Tiananmen Square.