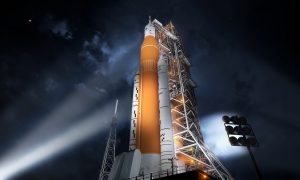 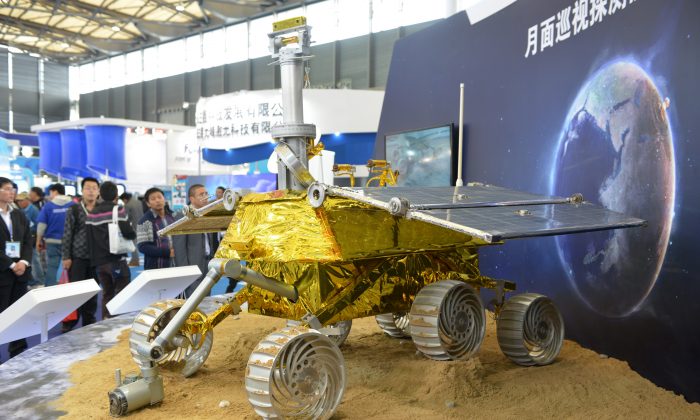 A model of a Chinese lunar rover at the China International Industry Fair in Shanghai on Nov. 5, 2013. (Peter Parks/AFP/Getty Images)
Opinion

National Aeronautics and Space Administrator Jim Bridenstine helped lead a rousing June 17 remembrance at Le Bourget of the 50th anniversary of the first Apollo mission to the moon. But nobody at the airshow, much less the Russians, thought to recall this is also the 50th anniversary of the former Soviet Union’s crushing failure to beat the United States to the moon.

But Moscow did take this race seriously, for example, developing the low weight single-cosmonaut LK moon landing vehicle. The Soviets also invested in the development of larger long-term moon bases under the leadership of Vladimir Barmin, his expensive unrealized program later earning the derisive moniker, “Barmingrad.”

Following the fall of the Communist Party of the Soviet Union, many of these talents became virtually unemployed, but they did not vanish. The Russian space program found a lifeline in its partnership with the United States, which first used the Energia company-designed MIR space station, and then joined with Energia to build the International Space Station (ISS).

Under the government of Vladimir Putin, while Russia-U.S. space cooperation centered on the ISS continued, Putin’s nationalist
antagonism toward the West found a reflection in space as well. For over a decade, Russian space companies have commented publicly on the possibility of separating the Russian part of the ISS.

When President George W. Bush announced his intention to return the United States to the moon in 2004, it is likely that Putin saw a U.S. challenge in trying to gain the geostrategic high ground. By the 2007 Moscow Airshow, the Energia company unveiled concepts for a new Russian moon architecture of unmanned and manned systems, to include manned moon landers and new moon habitats.

However, these likely remained concepts, failing to get necessary funding. President Obama then ended Bush’s moon program in 2010, as China began emerging as a third entrant in the moon race. Increasing Chinese indicators of an intention to reach the moon by 2030 likely did not escape the attention of President Donald Trump, who reversed Obama’s policy of putting Mars first, to that of returning to the moon first. Last March, Vice President Mike Pence advanced this goal to 2024.

China, for its part, in later 2018 and early 2019, began revealing elements of its manned moon program indicating they too want to get there well before 2030. These include revelations of a new way to develop manned space launch vehicles, concepts for a lightweight moon lander perhaps inspired by the Soviet LK, a moon rover that can serve as a habitat and larger long term habitat concepts.

Russian officials at the show explained that an overall plan for moon exploration would be presented for government approval later in 2019, but that so far, the only project so far funded is the first in a series of exploratory unmanned moon landers, Luna-25, scheduled for 2021. Three more unmanned landers will follow, perhaps to include unmanned rovers and there will also be “Cis-Lunar” missions that circle the moon.

By 2030 or so, funding willing, Russia hopes to put cosmonauts on the moon and displayed a concept two-stage moon landing vehicle for this job. The lander would soon be joined by an initial moon habitat, which appears to be based on the lander, that Russian officials said could sustain three to four cosmonauts for up to a month.

A TSNIIMASH timeline distributed at the Paris Airshow indicated that a larger multi-module long term moon habitat might be planned for 2040, but Russian officials noted the decision for such a structure might happen by 2035. This habitat will be joined by a separate large solar power gathering complex.

Russian officials explained that Russia’s primary objective is to advance moon science. Like the United States and China, the locus of Russia’s moon activity will also be the south pole of the moon, where it is believed there are large deposits of lunar ice water, which could support oxygen and rocket fuel production. Production of rocket fuels on the moon is viewed as essential for economic travel to Mars.

During a June 18 press conference, NASA Director Bridenstine stressed that U.S. plans to return to the moon include the early involvement of the private sector and international partners. NASA hopes these quickly assume funding and program burdens so NASA’s role can dial back its role to that of facilitator. To this end NASA can approach a large group of “alumni” countries that participated in the International Space Station.

Russia certainly can approach many of these same countries, but the international tensions for which Russia is in some part responsible may prompt many to be cautious and take great note of Russia’s willingness to cooperate with Western led efforts.

This leaves China as the main wealthy partner option for Moscow. Russia has sold Beijing a great deal of space technology since the early 1990s, with some more having been stolen. Russia has also been pursuing China for much of the last 15 years hoping to entice Beijing into a much larger partnership, including space stations and moon exploration. Beijing has resisted an expansive space partnership with Russia, perhaps a reflection of their underlying mistrust and China’s preference for leadership and control.

At his press briefing, NASA Director Bridenstine took the high road, noting that other countries like India and Israel also have moon exploration ambitions, saying “All of this we welcome.”

That’s fine when other countries are predisposed to the transparency and cooperation necessary for the management of increasing traffic to and on the moon. By contrast, China’s space and moon programs are controlled by the transparency-adverse People’s Liberation Army (PLA), which may want strategic military benefits or even lunar superiority. But China’s space program has had the advantages of strong political and funding support.

Should Russia’s moon program become allied with or even subordinate to that of China’s, then the United States may have to prepare for deterrence on the moon as it pursues exploration and profits. But as Russians likely know best, it is their political inconsistency that poses the greatest threat to their latest moon ambitions.

Richard D. Fisher, Jr. is a senior fellow with the International Assessment and Strategy Center.