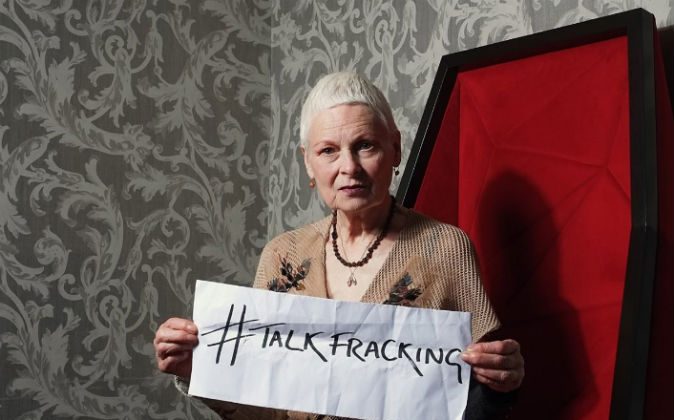 To Frack or not to Frack?

That is the question Vivienne Westwood wants the UK to be talking about.

The queen of British fashion is concerned about the future of Britain. To that aim Dame Westwood and Agent Provocateur founder Joe Corre have set up the Talk Fracking campaign.

The mother and son have toured five major UK cities last week offering free entry debates to the public.  They also invited representatives of the fracking industry and members of the government, but none attended.

Why Talk about Fracking?

UK’s Prime Minister David Cameron intends to lease 60 % of the country to fracking industries and energy firms such as Cuadrilla.

To that effect, Cameron’s government announced its intention to change trespassing laws in the UK that would allow fracking companies to drill under owner’s homes and land without permission.

This law will not take effect before a 12 weeks consultation period. According to a YouGov survey taken last month, 74% of the British public are opposed to fracking in the UK.

Cameron’s government is pushing for the development of a shale gas industry in the UK, claiming it would create jobs and growth, reduce energy prices and cut the country’s reliance on gas imports.

But the long lasting toxic effects hydraulic fracturing leaves on the environment and public health may very well out-weight any short term benefits.

Top world celebrities have joined Dame Westwood in her petition for a ban on fracking in the UK until public debates have taken place.

“I am campaigning against fracking because I believe that the government is misleading the public in this country and because they are trying to make us believe that fracking will be good for the country. Nothing could be further from the truth.”

“What interest as prime minister David Cameron has, that he wants to allow someone like Lord Browne, to be at the same time an adviser to the government, as well as the partly or maybe the main honor of Cuadrilla. Let’s not forget that Lord Browne was before the chairman of BP. And we know the track record of BP.”

Talk Fracking tour’s panelist Elizabeth Arnold warns of the consequences of hydraulic fracturing as experienced first hand in her community in Pennsylvania.

“The gas industry in Pennsylvania has not taken responsibility for the water it has contaminated, the devaluation in house prices that its caused, or the negative consequences that the drilling has had on other businesses and public health.”

“It’s important that the UK Public talks about fracking, and weighs up the impacts and track record of the gas industry in other parts of the world.”

“The only thing that is going to increase is debt. The fracking projects they maybe last one, two years at most. Then their sponsors declare bankruptcy, they move on, they leave the environment a catastrophe for someone else to deal with and pay for. But the country’s debt would have gone up and the price of energy will not go down, the price of energy will continue to go up.”

“Another economic certainty is that the amount of money that the goverment is going to print to subsidize the frackers, will create inflationary pressures and force the price of energy higher.”

Talk Fracking has once again invited policy makers, MPs, local government and members of the fracking industry to debate the issue in Westminster on July 14th.

Let’s see if this time they will join the debate and do their part in informing the public.