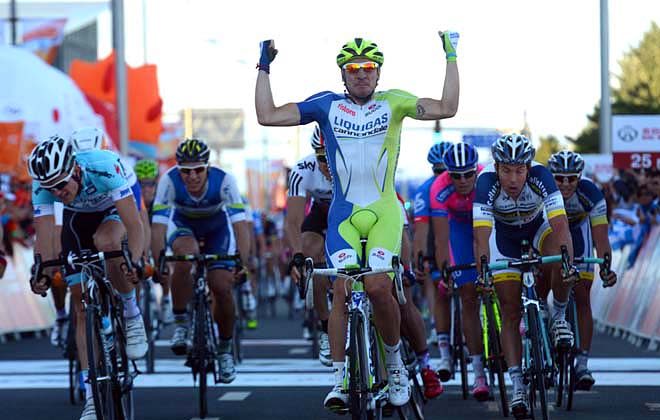 Liquigas sprinter Elia Viviani crosses the finish line a meter ahead of his rivals to win Stage One of the 2012 Tour of Beijing. (tourofbeijing.net)
Cycling

Elia Viviani of Liquigas proved to be the fastest sprinter in the Far East, winning Stage One of the 2012 Tour of Beijing Tuesday. Viviani beat a field of 143 riders from 19 teams in Beijing to contest the final WorldTour race of the year.

It was Viviani’s second Tour of Beijing win; the Italian rider won Stage Four of the 2011 race.

Viviani, who is also an accomplished track rider, jumped from wheel to wheel in the sprint as Liquigas couldn’t set up a leadout. Only Omega managed; the road was so wide and the pace so high it became every rider for himself. The sprint started too early; Viviani hung back and used his best speed after the competition was slowing.

“In the last kilometer I took Boasson Hagen’s wheel and I just stayed cool on his wheel,” Viviani told Cyclingnews.com after the race. “I followed him because I know that he likes long sprints and that way you stay out of harm’s way. It was a clean sprint: I managed to go at the right time and got myself free in the final 250 meters.”

Stage One was basically an expanded Criterium through downtown Beijing, past the forbidden City and the 2008 Olympic Village. The route was completely flat, ensuring a sprint finish, and Viviani had the legs, the timing, and the position to take the win.

The 117-km route started with a lap around Tian An Men Square, followed by a run along East Chang’An Street and 3rd Ring Road to finish with twelve 7.8-km laps around the 2008 Olympic venues—the Bird’s Nest, the National Aquatic Center and the Fencing Hall.

The roads were wide, completely smooth, and flat—perfect for the inevitable sprint finish. The only obstacle was the blustering wind, which luckily was a tailwind down the finishing straight, though of course a block headwind on the other side of the rectangular finishing rectangle.

The wind was a salvation for the riders. For the prior week Beijing had been experiencing record levels of pollution—health-hazardous levels. The wind came in at the perfect time to clear the air, leaving beautiful blue skies.

With the road so wide and the wind pushing hard, the sprint promised to be pure mayhem, as every team had enough room to ride for the win.

The breakaway was never allowed more than 90 seconds’ advantage, as Orica-Greenedge, joined by Rabobank and Liquigas, controlled the gap.

Two intermediate sprints added a little excitement to the middle of the race, with three, two, and one-second time bonuses for the top three positions. FDJ’s Matthieu Ladagnous won both sprints.

The peloton began gradually increasing the pace with three laps to go, and the gap dropped under thirty seconds. The breakaway lasted until the final two laps.

With the gap down to 100 meters, Craig Lewis, representing the only Chinese team, pushed on when the rest of the break sat up, showing the team colors, but a wall of riders thirty meters wide was sweeping up behind him. Lewis lasted through two-thirds of the lap before finally getting caught.

With about nine km still to ride, the teams weren’t ready to ride yet. Rabobank, Lampre, and GreenEdge led the peloton, with Katusha and RadioShack pushing forward. With a lap to go, riders had to get to the front in a hurry as Fabian Wegman of Garmin and RadioShack’s Hayden Roulston moved to the front and accelerated.

Sky also started moving forward, setting up Edvald Boasson Hagen, and Astana as well. Once the bell lap began, everybody wanted to be up front immediately.

With four km left, teams started setting up their leadout trains, or at least trying top. BMC’s Taylor Phinney came to the front and turned the pace up so high the field got strung out single file. Then Sky’s Alex Dowsett attacked, forcing everyone to chase and breaking up the sprinters’ teams even further.

Coming into the final kilometer, Rabobank tried to organize, but their sprinter, Theo Bos was stuck in the middle, then moved forward and past his leadout man. GreenEdge moved up and started the sprint on the right side of the road with Omega in the middle; GreenEdge ran out of steam while Edvald Boasson Hagen came up to the left of Omega’s Andrew Fenn.

Suddenly Liquigas rider Elia Viviani, who was third wheel behind Vacansoliel’s Kenny van Hummel and Boasson Hagen, suddenly popped out on the far left, found some clear road, and beat everybody to the line by half-a-length.

Stage Two starts at the Bird’s Nest stadium and heads west for 126 kilometers to the city of Men Tou Gou. The route includes the first climbs of the Tour: a pair of Cat 3s followed by a 10-km Cat 1 (4.9 percent average grade) and final Cat 2 (3.6 km at 5.6 percent.) The race will get very interesting as the hills start rising and the General Classification contenders start their battles.