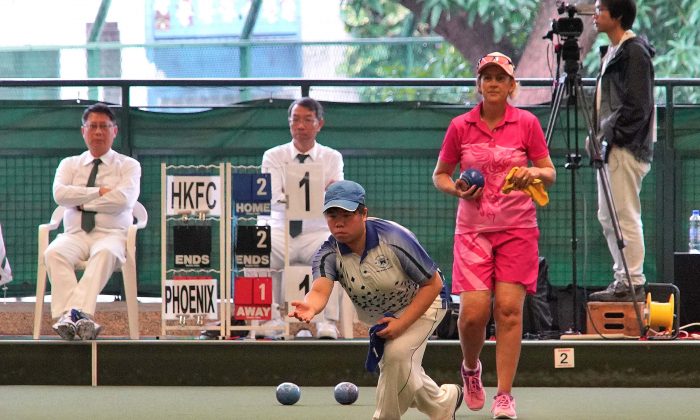 Hong Kong girl Vivian Yip on her way to winning the women’s singles title at the Hong Kong International Bowls Classic last Sunday, Nov 12. She defeated Julie Keegan from Australia 3:9, 9:6, 3:1 in the final. (Mike Worth)
International

Yip, who won the Classic pairs with her Hong Kong Youth Team teammate Amy Choi in 2015, faced two times Classic pairs champion Julie Keegan from Australia in the final when both players were hoping to complete their collection of Classic titles.  In the past two competitions Malaysian, Nor Hashimah Ismail and Siti Zalina Ahmad, completed this feat in 2010 and 2014 respectively.

Partnered with Kelsey Cottrell, Keegan won the women’s pairs in 2009 and 2010 when representing Australia.  This year she played for the sponsor team Phoenix.

Same as 2015 when the pairs final was forced to move to the indoor greens of Club de Recreio due to poor weather, the singles final this year also needed to move indoor as rain became heavier with no sign of stopping approaching the scheduled time for the finals.

Keegan started the final well, despite the fact that she had never played on the rink before.  After losing one shot in the first end, she won the following six ends and took the first set 3:9.

Yip fought back strongly in the second set, won three shots in the first two ends.  Keegan then played some good shots to take four in the third end.  In the fourth end when Keegan was holding a shot, Yip trailed the jack and won two. She continued to press and won the set 8:6 to force the match into  tie-breaker.

Keegan took a shot in the first end of the tie-break. In the second end when she was holding a shot, her last bowl was a bit heavy and pushed one of Yip’s bowl as shot. Yip followed that up and drew another one to lead by 2:1.

In the last end, Keegan again pushed one of the Yip’s bowls as shot with her third bowl and Yip drew the fourth bowl almost touching the jack. Keegan played her last bowl heavily in the hope of breaking the head but missed everything.

Yip was so happy after the victory and started hugging everybody in sight, “I just want to share my joy with anyone I know. It was a very special win as my opponent is a very experienced bowler and the game was so difficult,” said a jubilant Yip.

She believed that the crucial moment was when Keegan mistakenly gifted her the shot in the second end of the tie-breaker, “My drawing was quite consistent throughout so I had no problem adding another shot. The same thing happened in the last end and I just kept my focus on drawing and this won me the title”.

In the youngest ever men’s singles final in the Classic history, 26-years-old Jesse Noronha from Australia defeated 21-years-old John Fleming from Scotland in a tightly competed final.

The first set was so tight that the score tied three times and the result was only finalized in the last end, when Noronha took two shots to win it 7:5.

The second set was also very close and Noronha was holding a shot into the last end.  Fleming drew a toucher with the first bowl and the jack stopped at jack level.  Noronha’s first bowl was also a toucher and pushed the jack to touch Fleming’s bowl, making it difficult for Fleming to add another shot.  Fleming tried to push the jack with his third and last bowls but in vain and the set finished 5:5.

Noronha said that his experience with carpet helped him a lot in the final, “At my home club we also have a carpet green so I am quite used to playing on this kind of surface, despite the speed is a bit different. I think it was my consistence that helped me to win it because in most of the ends my first bowl was always good and this put the pressure on my opponent.

“The most critical moment was in the last end when my first bowls was really good, making it almost impossible for Fleming to add another shot.  I hope my consistent performance will help me to get into Australia’s main squad,” said a happy Noronha.

You may view the exciting moments of the finals on YouTube: http://www.hklba.org/live.