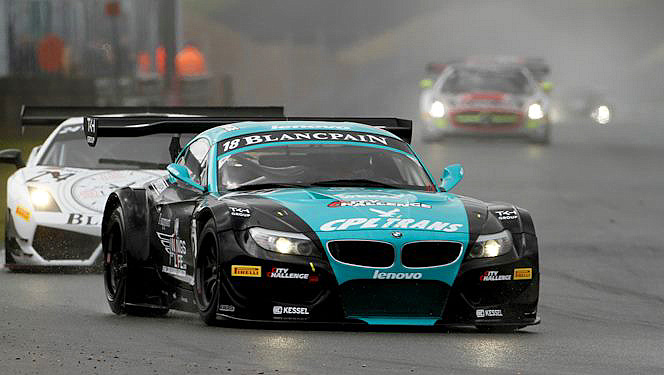 Yelmer Buurman didn’t have time to talk much after the race, as he was committed to drive in the next event. He took a few seconds to tell the GT1 reporter, “It was great; in the rain we were really quick then when it started drying we struggled a bit with the tires. Michael [Bartels] did a fantastic job so—P1!”

Michael Bartels said that there was some confusion with the scoring at the end.

“I was not sure in which position I was, in the last five laps; I saw P2, so I became a little nervous. I was a bit quicker than the car in front of me, Winkelhock, but the car behind, Jäger, was pushing quite hard.

“After the quite frustrating opening of the season, to have victory in the qualifying race is good it’s good to be back on the podium.”

The race started with a wet track, and started with controversy: Peter Kox in the  #25 Reiter Lamborghini edged past Oliver Jarvis’s Team WRT Audi at the start. Kox was given a drive-through on lap 15, giving the lead to the #33 WRT Audi of Oliver Jarvis—the car which won the first two races of the season.

The top five cars were lapping within four seconds of one another for the first half of the racewith Kox a couple seconds ahead and no space between 2–3–4. Buurman started fourth, lost a place to the Reiter Lamborghini of Thomas Enge and took it back on lap three, and spent the rest of his stint harassing Marc Basseng in the #38 All-Inkl Mercedes for third.

The track was dry enough by the time the pits opened for cars to switch to slick, yet somehow Team WRT sent out both cars on rain tires. Driver Oliver Jarvis called it the result of “a miscommunication—I called for slick tires but the radio didn’t work.”

Many teams were having radio problems because of the weather and the trees lining the course, but even if one of the WRT drivers had been misunderstood to ask for rain tires, the crew could have watched what all the other teams did, and at least split strategy. Instead both cars had to repit after a couple of laps, ending their chances for another sweep.

The second half of the race was a battle between Mercedes and BMW, with Porsche lurking just behind. Marcus Winkelhock in the #38 All-Inkl Benz led Michael Bartels in the #18 BMW with Thomas Jäger catching him up from behind, while Matt Halladay in the #9 Exim Bank 911 chased all the leaders.

By lap 28 less than three seconds separated the top three, with the Porsche 18 seconds back and closing. Apparently Winkelhock had a softer set-up, suited to the wet starting conditions, but Jäger had a dry setup and was the faster of the two at the end; but Jäger couldn’t find a way past Bartels.

This fight lasted until lap 32, when Winkelhock’s throttle actuator broke and he had to pull to the side. This left Jäger fighting with Bartels for the lead. Behind them, Frédéric Makowiecki was finding his #1 McLaren liking the drying track; the Hexis driver had closed right up to the wing of Halladay’s Porsche.

The fight for third was as intense as the battle for the lead; in both cases the drivers had to be perfect through every corner. With the drivers concentrating so hard on defense, Nikolaus Mayr-Melnhof in the 317 Vita4One BMW had a chance to close on the McLaren/Porsche fight; these three crossed the finish line nearly as one.

Bartels managed to hold on by .0567 seconds to take the win for Vit4One BMW. The All-Inkl Mercedes had a healthy lead over the third-place Exim Porsche of Matt Halladay, who led the Hexis McLaren by .541 seconds. Makowiecki in the McLaren was only .343 ahead of Mayr-Melnhof in the second Vita4One car.

The real losers of the race were the teams which made fatal errors: Peter Kox, in the fastest car on the track, lost the race because he didn’t lift approaching the start-finish line when Oliver Jarvis in the WRT Audi, did. And WRT, which dominated the first round, inexplicably blew the call on tires and sent both cars out on rain tires.

Luckily, the loss of those very fast cars didn’t keep the race from being exciting right until the checkered flag.

The Championship race at Zolder will be streamed live on GT1world.com starting at 8:45 a.m. EDT.