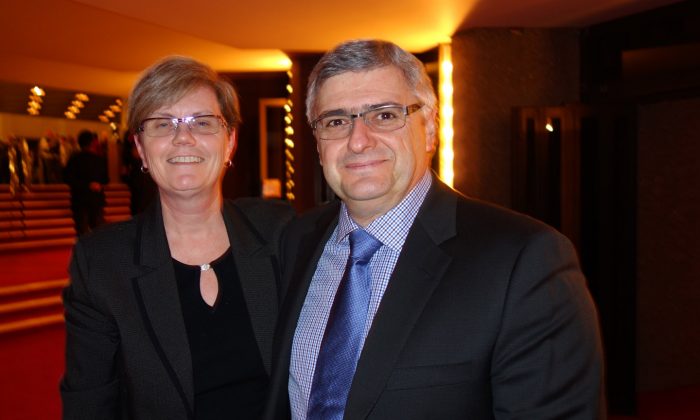 OTTAWA, Canada—Michel Cavallin was thoroughly impressed by Shen Yun Performing Arts at the National Arts Centre on Jan. 2, as the acclaimed classical Chinese dance and music production graced the stage at Southam Hall for its ninth season. He attended the first of four Ottawa shows on Friday night with his wife, Tina.

“It’s visually stunning. The costumes are amazing, very colourful, and very well done. The dance and all the moves were quite fantastic. I quite enjoyed it,” said Mr. Cavallin.

Mr. Cavallin, having been to China, was interested in Chinese culture and spent some time online reading up on Shen Yun just before coming to see the show. In fact, Shen Yun presents a side of China that is increasingly harder to see nowadays—that of its traditional culture—and it is Shen Yun’s mission to revive authentic Chinese culture.

The production is enhanced with colourful costumes, a state-of-the-art digitally animated backdrop, and a unique orchestra.

Shen Yun’s orchestra combines a Western orchestra with traditional Chinese instruments such as the pipa, erhu, and suona.

“I’m very much enjoying it,” Mr. Cavallin said about the music. “The Chinese instruments in particular are haunting in the background.”

Shen Yun’s performance also brings out some of the traditional beliefs and values of ancient China, principles that Mr. Cavallin felt can have a positive impact on today’s world.

“It’s all very traditional in that it takes you back to a simpler time, one that’s less rushed, less connected, and more peaceful and more pensive. People will think a little bit more,” he said.

Shen Yun’s digital backdrop also impressed Mr. Cavallin, particularly the way in which it helps to convey the spiritual meaning behind some of the pieces. Just as the Chinese culture is said to have been passed down from the heavens, animated divine figures in the backdrops interact with the performers on stage to add depth to the piece and to enhance the storytelling.

“With the screens in the background and the dancers popping up, it makes it three-dimensional. It very much relates to the spirituality of each of the pieces with the deities coming to life,” Mr. Cavallin said.

What Mr. Cavallin and his wife saw on Friday night, they’d definitely recommend it to others.

“I would recommend they go see it because the costumes, the performance, the music, it’s all visually stunning and a very enjoyable evening.”