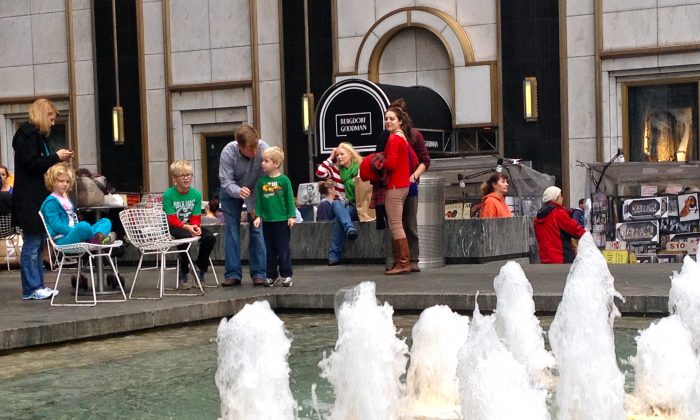 NEW YORK—Visitors flooded the city’s attractions and welcomed the warm weather on Sunday. The spring-like 70 degrees made Sunday afternoon were the warmest Dec. 22 on record.

Visitors strolled in Central Park, packed in lines to skate at the rink in the Rockefeller Plaza, and shopped on Fifth Avenue, carrying coats and scarves over their arms as the weather caught most off guard, but didn’t deter them from enjoying vacation time.

The Simon family who were visiting New York City from California stood in the long, winding line at the Rockefeller Center and waited patiently to skate on the rink under the world-famous Christmas Tree.

“We expected much colder, but it’s beautiful,” said Ani Simon.

Fred Ganter who stood behind the Simon family in line for the skating rink visited the city from Florida.

“It works out pretty well,” he said, noting that they’re used to warm Christmas weather. “I wasn’t expecting ice to be melting,” Ganter said.

Young, athletic, boys with long squeegees chased puddles of water into the small drain holes on the sides of the ice rink. After half an hour of routine cleaning, the boys reopened the gates and the crowd poured in.

As people rushed onto the glossy ice surface, a few children sped up, slipped, and fell into puddles of water, got up, smiled, and carried on skating.

“We’re well prepared,” said one of the rink supervisors, Julian Pagán, a high-school student and hockey enthusiast. Pagán said that after the ice is cleaned with squeegees and a Zamboni machine, which resurfaces the ice, visitors can skate up to one and a half hours.

The last record for the highest temperature in New York City on December 22 was set in 1998 with 63 degrees, according to the National Weather Service. Sunday beat that by a whopping 7 degrees.

Vendors along the festive and crowded Fifth Avenue enjoyed an unexpected influx of customers as well.

“I hope it’s going to stay like this,” said hot dog vendor Mohamad Elsherbiny who has been selling on 53rd Street since 2000.

Across Fiftth Avenue from Elsherbiny, a pretzel vendor, Reda Ismaeil, who has been in the business for over 21 years said that although the business is slow, the past two days brought in many more customers. “Of course the summer weather is good,” Ismaeil said.

Martin Jehle who came to New York for a friend’s wedding said the weather reminds him of his last Christmas in the south of Germany.

“We had barbecue outside,” Jehle said, “this is great.”