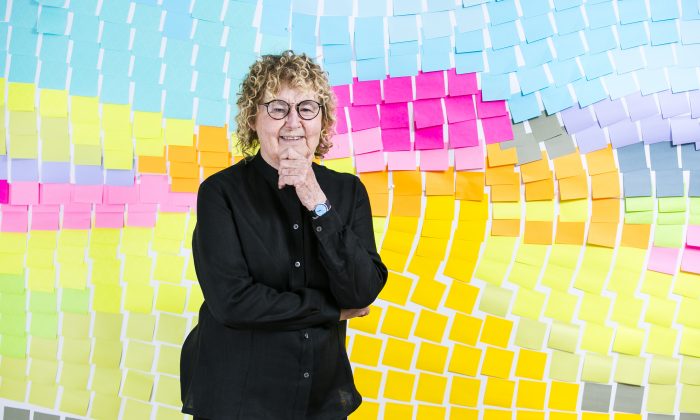 “We need to create a different balance between the inert surfaces and the living surfaces,” Balmori said over coffee at her firm, Balmori Associates, in New York City’s SoHo neighborhood. By inert surfaces she means all that concrete and tar.

An internationally renowned landscape and urban designer, Balmori was one of the first designers and proponents of green roofs. She founded Balmori Associates in 1990 with the aim of designing sustainable infrastructures that have a low impact on the environment and that are regenerative—infrastructures that work with nature. She also teaches at the Yale School of Architecture and the Yale School of Forestry & Environmental Studies.

As a visionary Balmori said new ideas take about 20 years to materialize and to become standard. She started with green roofs 15 years ago. “We have five more years to go,” she said laughing. “It just seems so old hat to me,” she added.

Today the city’s rooftops and outer walls remain mostly gray at large. Balmori imagines how wonderful it would be for all them to be green, full of hearty sedum plants.

Balmori was named 1 of the top 50 “Visionaries Who Are Changing Your World” (2009) by Utne Reader, the “Third Most Creative People in Business” (June 2013) by Fast Company, and 1 of the 10 innovators by Architectural Digest (September 2013).

Surrounded by concrete, tar, glass, metal, and steel structures, in the city it is easy to forget nature. Yet hardly any city dweller can ignore the inevitable forces of a snowstorm or heavy rains, nor can they ignore the summer heat that keeps the sweat going while walking on sidewalks between dirty car fumes and air-conditioning exhaust. It’s no wonder New Yorkers love Central Park so much or why tourists flock to experience the city skyline walking down the High Line park in droves.

The city seems to be missing an essential layer of skin. The gray roofs are very raw and exposed to the elements.

“The city has the earth underneath it, the geology in it, the sun above it, the rain coming down on it. It has all of the elements of nature, but they cease to be visible and they cease to function in the way that they are most useful,” Balmori said.

“We haven’t looked at the city in that way enough to understand that it really has enormous possibilities of places in which it can really provide for living things,” Balmori emphasized.

And she doesn’t just mean plants, but all the life that goes with it, like insects, butterflies, bees, and birds.

For example, honey is gathered at rooftop gardens, such as at the Waldorf Astoria’s 20th story garden and apiary. That is a result of “transforming certain amounts of surfaces into living surfaces,” Balmori said.

A Low-Maintenance Plant as Tough as New Yorkers

Seeing the city as Balmori sees it, the city seems to be missing an essential layer of skin. The gray roofs are very raw and exposed to the elements.

One of the first green roofs Balmori designed was for Silvercup Studios in Long Island City, Queens. They laid out trays with just two to three inches of light soil, a porous growing medium ideal for drainage and for planting sedum.

Sedum is a succulent flowering plant genus with a variety of over 600 species that grows naturally on limestone, volcanic rock, loess, and bare rock. It survives the cold winters of New York City easily; it can live without water for long periods, and can recover quickly.

Some varieties of sedum turn rusty red during the winter, and flower in the spring, attracting insects and creating a healthier ecosystem in the city. The success of sedum for green roofs has resulted in a whole series of parallel industries including growers that specialize in sedum.

“Even the thinnest cover of sedum in soil ameliorates the enormous differentials in temperature that eventually produces the cracks [in the roofs],” Balmori said.

They provide a perfect insulation layer, limiting heat loss in the winter and absorbing heat and they cool temperatures in the summer.

In addition to expanding the lifespan of roofs by two to three times, from about 25 to about 75 years, it helps clean the air and water through its special form of photosynthesis. It can also help reduce noise levels, retain storm water run-off that is a major cause of pollution to waterways, and it raises the value of the property.

Balmori and her firm calculated that if all the buildings in Long Island City had green roofs it would add up to the size of Brooklyn’s Prospect Park. She said that’s a dream that no city could have dreamed of before because the land has already been covered. But several feet above and “the land is [potentially] there in the roofs, and we can get all of the effects from it,” she added.

“It’s another way of looking at the city, and I think we have to change our heads around,” Balmori said.

Recognizing the benefits of green roofs, the City of New York and New York State passed legislation in 2008 that gives a one-year property tax credit of up to $100,000. But Balmori said more awareness and simpler incentives are needed for green roofs to really flourish extensively before we can see mostly green instead of gray.

After looking out of her window at Balmori Associates—with a dozen designers, architects, strategic planners, project managers, artists, and community organizers—on the corner of Broadway and Houston, she sighed. With further construction and development the horizon line will eventually change, perhaps becoming even more closed in.

She challenged herself to determine the smallest possible space that could give a feeling of infinity.

As a landscape and urban designer she works on a grand scale, takes on a broad perspective, all the while considering how space affects urban dwellers. “It’s shaping openness. It’s shaping air. … And you can shape it with lots of things, not just plants,” she said.

In between designing and executing massive projects, like the port area by the Guggenheim Museum in Bilbao, Spain, or the superstructure of green walkways linking the governmental buildings in the new South Korean city of Sehong, Balmori also creates temporary small-scale installations.

As part of the New Museum of Contemporary Art’s civic program called Ideas City, Balmori installed a pop-up temporary meditation room in collaboration with The Drawing Center, on May 30, 2015. A cylinder, about 10 feet in diameter, made out of a metal frame with a semi-translucent paper was assembled in Sara D. Roosevelt Park on the Lower East Side of Manhattan. The paper had two overlapping dot-matrix patterns that created a horizon, as if simulating a meeting between sea and sky.

A brief list of instructions was printed on the outside of the cylinder, starting with: “Join us in a ten-minute meditation, a pause, to connect with the sense of an expansive horizon in the smallest of spaces.”

The instructions ended with: “Upon exiting, we invite you to ‘play with the horizon’ and share your experience with us in the form of a drawing.” The Drawing Center provided a full range of colored pencils and drawing paper that was hard to resist.

For Balmori the Meditation Room was like placing an opening in the city. Through visual elements in the form of a perfect circle, the dot-matrix pattern fading out and back in, without any other visual element interrupting your peripheral vision, it induces “the sense of infinity,” she said.

She challenged herself to determine the smallest possible space that could give a feeling of infinity. “I’m creating space,” she affirmed.

Balmori selected about 96 of the drawings and she plans to publish a booklet. She also plans to install the Meditation Room in other parts of the city in the future.

In the face of so much destruction and environmental degradation around the world, as a result of what Balmori called a “sort of industrialization of the mind,” her attitude toward nature and her design philosophy germinated from an experience she had as a child in the desert of northwestern Argentina and southern Bolivia.

“It was really a very powerful and unforgettable experience,” she said.

Having grown up in Spain, England, and Argentina, she pronounced “Bolivia” with a perfect Spanish accent. Her father was a linguist who was trying to record the disappearing languages of the indigenous people living there.

Balmori has sparked and sustained a vision of reinventing the city with cleaner water, cleaner air, beautiful green views, and open spaces.

“I was astounded at both the beauty, and at the same time at the extremes at which some very few plants and animals could live on,” she said. And the beauty of a “sudden blooming of the desert when only drops of rain fell,” she said. “It’s just life but at the extreme.”

In the same way, we could say New York City and other large cities are extreme environments built with a general disregard for the environment. In the city “it seemed to me that we were creating a desert but in a different way … diminishing the things that could live in it, but it’s not beautiful,” she said.

As much as Balmori loves the desert, however, she loves living in cities, especially in New York City. So by drawing inspiration from the desert to reverse the man-made desertification of cities, she has sparked and sustained a vision of reinventing the city with cleaner water, cleaner air, beautiful green views, and open spaces.