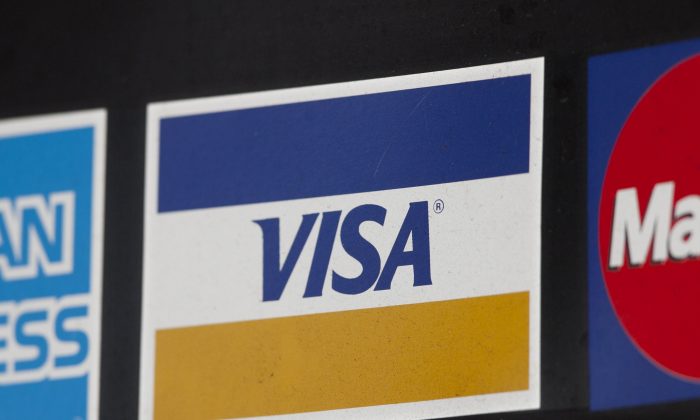 A sign for Visa is shown in New York on March 19, 2012. Visa plans to buy Visa Europe in a cash-and-stock deal that could be worth more than $23 billion. (AP Photo/Mark Lennihan)
Business

Visa to Buy Visa Europe in Deal That Could Exceed $23B

NEW YORK—Payment processing giant Visa announced plans Monday to buy its sister company, Visa Europe, in a deal that could be worth more than $23 billion and would consolidate all of Visa’s operations worldwide.

The deal would make the world’s largest payment processing company even larger. The two companies have more than 2.9 billion cards issued on its combined network, processing roughly 88 billion individual transactions a year.

“We are very excited about unifying Visa into a single global company with unmatched scale, technology and services,” said Charles Scharf, Visa’s chief executive officer, in a prepared statement.

Under the terms of the transaction, Visa will pay 11.5 billion euros ($12.66 billion) in cash plus stock valued at about $5.5 billion. Visa Europe shareholders would also earn an additional payment valued at nearly $5.2 billion if certain revenue targets are met four years after the deal is closed, which is expected in mid-2016.

Visa plans to pay for the transaction through the issuance of $15 billion to $16 billion in new debt.

“We still see Europe as a very attractive growth market. It will be the second-largest market for Visa once the merger is completed and there’s still a lot of cash and checks to go away,” Visa CFO Vasant Prabhu said in an interview.

Visa Europe operates in a similar structure that Visa used to before it went public. Visa Europe is collectively owned by approximately 3,000 banks and payment companies and has no public shareholders like Visa does. When Visa Europe is purchased, it should provide a notable financial windfall for the European banks who own it. British bank Barclays said Monday it expects to make a profit of 400 million British pounds ($617.98 million) once the sale is completed.

The deal will finally give Visa meaningful exposure to Europe, which was considered a competitive disadvantage. Its rival MasterCard owns its European operations.

But the combined Visa business could face more regulatory scrutiny as the payment processing industry becomes even further consolidated under the banners of Visa, MasterCard and, to a much lesser extent, American Express.

Visa executives say they do not expect any significant regulatory issues with the merger, since Visa has no significant exposure to Europe at the moment and it isn’t buying a competitor.

For consumers, the merger of Visa and Visa Europe will not be a significant event. Even though consumers interact with Visa nearly every day when they swipe their credit or debit cards, customers don’t directly pay money to Visa to use the company’s network.

Global payment volume on Visa’s network, a key measure of the company’s business, rose 12 percent to $1.265 trillion in the quarter, when adjusted for currency fluctuations. Like MasterCard, Visa takes a small percentage of each debit or credit card transaction processed on its network as a fee. Credit and debit card volume in the U.S., Visa’s biggest single market, rose roughly 10 percent from a year earlier.