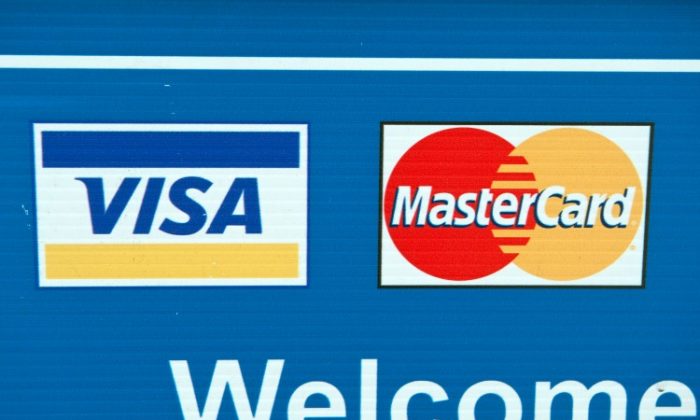 Visa and MasterCard credit card logos are seen on a sign in Washington on March 30, 2012. Starting Jan. 27, merchants have the ability to charge a checkout fee for customers using such credit cards. (Nicholas Kamm/AFP/Getty Images)
Business

You may see your credit card bill get a little bigger starting this week.

Beginning Sunday, Jan. 27, merchants have the ability to tack on a new surcharge for customers paying with Visa or MasterCard credit cards.

The law, which kicked in on Sunday, arose out of a class-action lawsuit merchants and businesses brought upon major credit card issuers. The case was settled out of court in July 2012.

Merchants have the ability, but are not required, to add the surcharge. The amount of surcharge varies depending on the type of merchant, but can vary between 2 to 4 percent, according to Visa, the world’s biggest credit card company.

“If retailers intend to impose a surcharge on credit card purchases, they are required to notify customers before customers make an actual purchase at the store entrance and at the point of sale—or in an online environment, on the first page that references credit card brands,” according to a statement from Visa.

“Merchants will have the ability to impose a surcharge on card purchases with no requirement to reduce prices, a power it is our hope that merchants will not exercise to the detriment of their own customers,” said Thomas Goldsmith, Director of Communications for Electronic Transactions Association, in a statement. “Consumers should be vigilant to ensure that merchants treat them fairly and that they are fully informed.”

The surcharge will not affect customers in several states, which have laws banning credit card surcharges. Such states include California, Colorado, Florida, Kansas, Maine, Massachusetts, New York, Oklahoma, and Texas. However, merchants are free to increase the prices of their goods and services to compensate for the inability to charge this fee.

Experts say that small businesses and “mom and pop” shops are likely to pass on such surcharges to customers. Some smaller businesses already have a “cash-only” policy to avoid such fees.

Big-box retailers and corporations are less likely to impose the fees onto their customers. The Wall Street Journal reported last week that several large retailers—including Home Depot, Sears, and Target—will not add any fees, stating that the settlement would not affect their prices.